When I heard that Henry Repeating Arms was introducing a lever action .410 shotgun, my first thought was, “Why?” I eventually came to a simple conclusion: Henry jefe Anthony Imperato wouldn’t waste his time (and money) on making a product with no purpose or demand. The question then became, is it any good?

Henry makes these new lever-action shotguns in 24-inch and 20-inch models. I spent some time comparing the two on their website and opted to go with the 20-inch model for review.

When I picked up the gun from Sportsman’s Finest, it was exactly what I expected: a standard white Henry box sheltering a lever-action blued steel and American walnut long gun. At first glance, you wouldn’t realize that it’s a shotgun. And for good reason; the .410 bore shotgun is made on Henry’s .45-70 lever-action rifle frame. I live in the country; .410 shotgun shells aren’t the first thing to fly off the gun-store shelf. So I picked up a couple boxes of the only option available: 2.5-inch Remington American Clay & Field shells, ½ ounce of size 8 shot. I could have driven a few towns over and scrounged the shelves there for other options (including slugs), but I couldn’t wait to get back home and put some rounds down range. You load the new Henry lever-action shotgun the same way you load a Henry rifle: Twist the follower and pull it up past the loading port. Load five 2.5-inch shells (don’t try to cram in six, or use 3-inch shells), push the follower down, and twist to secure it.

The .410’s action is as smooth as fresh-churned ice cream and just as sweet. At the risk of sounding like a broken record, the Henry shotgun performed just like their rifles. I had no issues with any of the boxes of rounds I cycled through the gun. 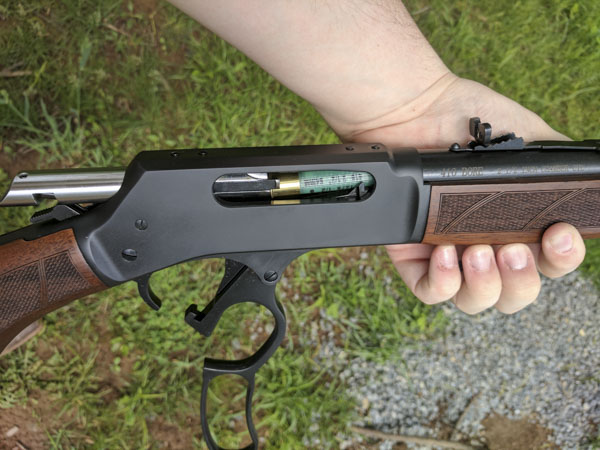 The 20-inch model has a cylinder bore with no choke, making it safe to shoot slugs. The 24-inch model comes with a Browning-type Invector-style full choke from the factory, that can be switched out with other screw-in chokes of your choice. The sights are unusual for a shotgun, but effective. The rear sight is an adjustable semi-buckhorn with a white diamond insert and the front sight is a brass bead. The adjustable rifle sights make it easy to regulate patterns with a variety of birdshot and slugs to handle anything from small game birds through cottontails to fox and coyotes, varmints and pest control. The combination of the bead front sight and the adjustable rear sight made it very easy to acquire the sights and get the gun on target quickly.

Adjustment is easy and, as expected, the shotgun put pellets right where the sights were aimed. If iron sights aren’t your thing, the receiver is also drilled and tapped for a scope of your choice. The 24-inch model is different. There’s a brass bead on the front, no rear sight, and it’s not drilled or tapped.

The .410 weighs in at almost 7.5 pounds, but it’s still light enough to be carried through the woods comfortably while in search of small game. If you’d rather put a sling on it, there are sling swivel studs already installed. When shooting, I engaged the targets at two distances: 7 yards and 10 yards. At 7 yards, the pattern was nice and tight, clustering most of the shot in the inner 10 inches of a 12-inch circle. The larger holes seen in the target are from the wads. At 10 yards, the pattern had opened up a bit — as expected — but all of the shot was nicely clustered in the entire 12-inch circle and the wads didn’t impact the target.

After spending time on the range with this little lever gun, I’m no longer wondering why Henry decided to get into the shotgun game. This .410 is a great gun. Loaded with shotshells, it was fun to shoot at paper, which can get boring pretty quick. I plan on heading into town soon and getting some slugs to shoot at cans. We don’t recycle in Virginia, so I’ve got plenty of cans to unleash some slugs on in the coming days!

Henry uses the same blued steel and American walnut here that they use on their rifles. The wood to metal fit is great, the bluing is nicely done and even throughout, and the walnut stock is very attractive. Just like their rifles, the Henry shotgun is a vision of simplistic beauty.

The gun shoulders and points with ease. The weight of the gun combined with light .410 rounds and a rubber recoil pad on the buttplate makes it a joy to shoot.

I ran a few boxes of shells through it without bothering to clean it beforehand. No failures to feed or eject. The action was still nice and smooth even after putting it through its paces.

The gun was accurate right out of the box. The shot grouped great at close range and had a nice, even spread a little further out.

I didn’t really think I wanted (or needed) a lever action .410 shotgun, but I’ve been converted. It could be just the ticket as a home-defense gun, or for shooting buckshot and slugs in small-game hunting. The Henry .410 is easy and fun to shoot, making it a great choice for new shooters as well as seasoned shotgunners (and self-defense seekers) just looking for something different and fun.