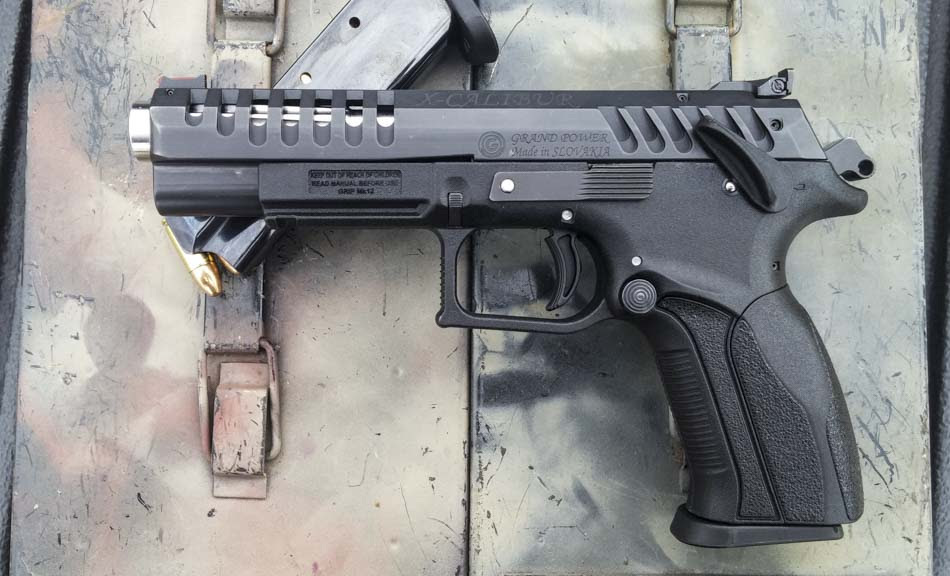 RF has known me for a couple of years now. So when he told me to come over and pick up something interesting I was thinking more along the lines of a bottle blonde with chest ink and a couple priors. What I got instead was the Grand Power X-Calibur 9mm pistol. I’d be lying if I said I wasn’t a little let down. Still, it’s a neat looking target pistol. Robert’s invitation may have been a disappointment, the pistol wasn’t . . .

Other than the gun itself, I didn’t have much information to go on. A Google search sent me straight to the Grand Power LTD website. Fortunately I have my Texas concealed carry permit, because otherwise I guess I wouldn’t be allowed to look at the site. As soon as you open the site a disclaimer reads:

Websites you are about to enter are dedicated to experts in field of firearms and ammunition. You state that you are firearms license or permit holder by entering these sites. OK.

From that moment on, everything I read had a thick Soviet-era accent to it. The website didn’t provide much information in the way of the gun’s manufacture or the functioning of the pistol, but it was well worth a read:

Appearance of the X-CALIBUR model follows well known X-TRIM model with typical shapes on the slide. The new shaping of the slide resulted in weight reduction, the gun appears light and predaceous. The revealed barrel together with emphasized castellation of the slide offers an attractive design putting the shooting experience on the first place.

“Light and predaceous.” How Jurassic Park is that? Eagle Imports brings this gun into the USA and you can find a description of it on their website. It’s in plain old boring English.  Anyway, Grand Power is a Slovakian manufacturer. The X-Calibur is their top of the line “sport” pistol aimed at the IPSC shooter (so to speak). Like many of the guns for this market, it’s a DA/SA full-frame 5″ slide 9mm with a 15+1 capacity. It looks and feels like many of the High Power/ CZ-75 guns vying for competitors’ cash. 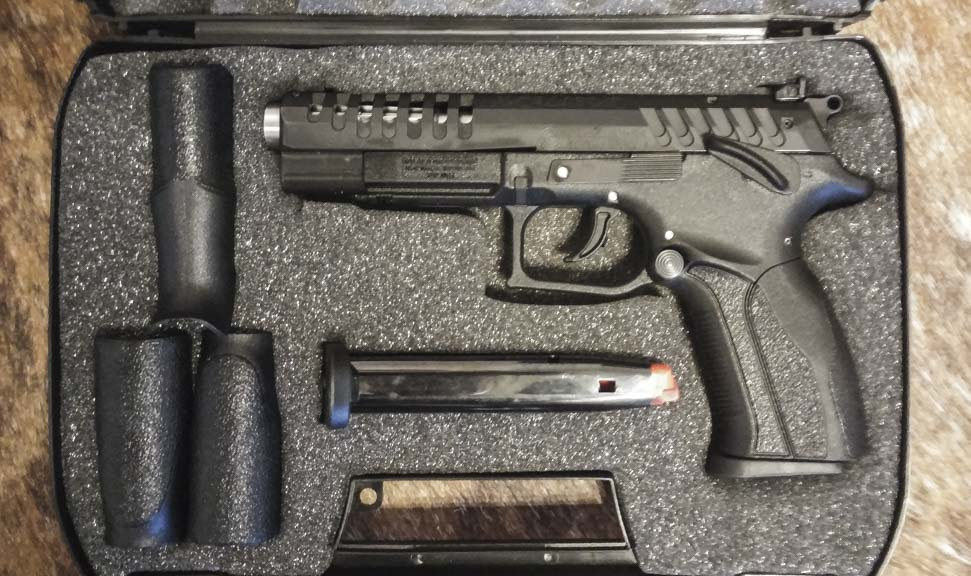 The Slovakian gun shipped with two 15-round magazines and multiple back straps. At first glance, gun is good! The X-Calibur’s 1mm wide fiber optic front sight and adjustable rear sight and long sight radius ((over 8 1/2 inches) are ideal for accuracy-minded shooters. Lefties and wounded righties rejoice! The X-Claiber’s safety, magazine release and slide lock are on both sides of the pistol. 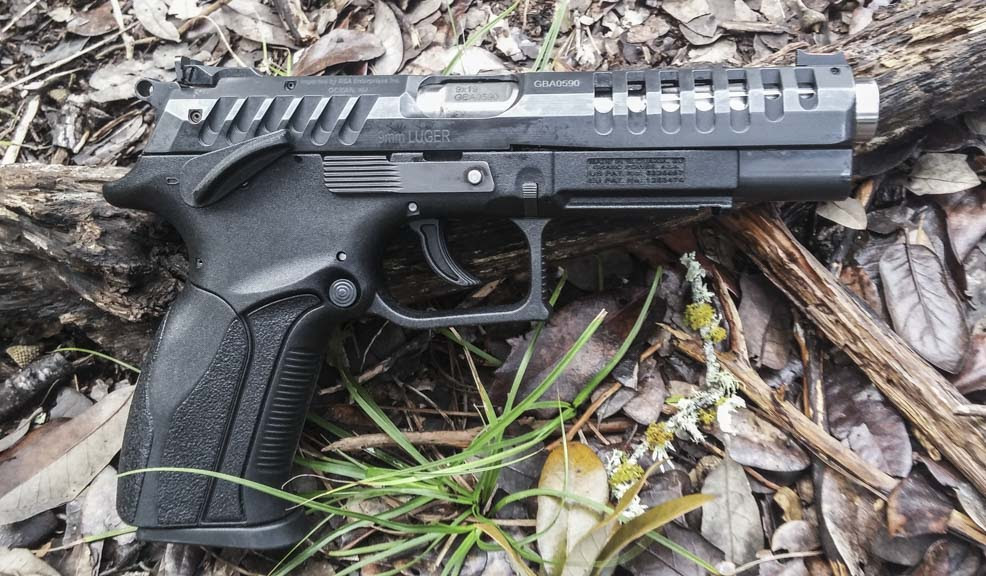 Takedown is pretty simple, but read the manual. It’s kind of a down and back and forward thing that’s easy to do and hard to say. Once stripped to its bits, the X-Calibur appears to be a steel-frame pistol wrapped in a polymer coating with a steel slide. The older K100 pistol by Grand Power was imported by STI here in Georgetown, Texas, with STI branding on it.  STI is the maker of the familiar 2011 race guns, and the heritage of that manufacturing is present in the X-Calibur as well. 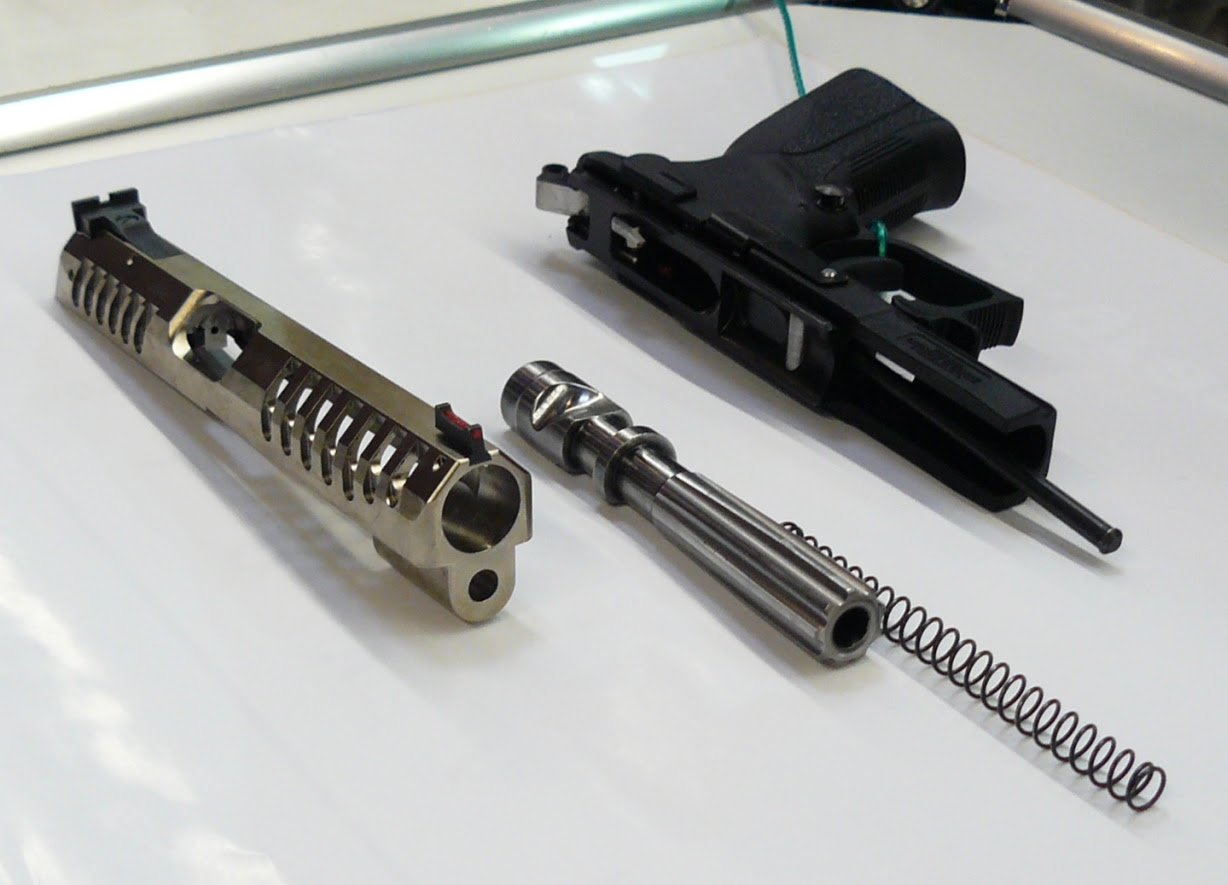 Grand Power heavily serrated the slide with deep decorative cuts. The resulting weight loss makes the gun feels light and maneuverable. Robert was right about one thing: the X-Claiber’s distinctive barrel alone makes this gun interesting. No, it’s not that it’s grooved, though it is and deeply. What really makes this barrel different: it doesn’t tilt. It rotates 90 degrees to accept a new round and then locks into battery upon rotating back.

Very few pistols use this type of action. The Berretta Storm uses a similar system – and that’s all I can find. (No doubt TTAG Armed Intelligentsia will offer a full history, a list of guns so constructed and the rotating barrel’s pros and cons. Gratefully received.) After working dry fire drills with the X-Calibur and meditating on the internals, I figured the rotating barrel gives the gun a slightly lower bore axis in a common pistol length gun. At this point, the X-Claiber had my full attention.

Loading the magazines to full capacity is pretty tight. (Despite sacrificing my epidermis for the cause, I could only load 14 rounds of Wolf ammo.) I loaded my first 30 rounds of Winchester White Box 9X19, locked the X-Calibur’s action back, flipped the safety up, and inserted the magazine. The gun immediately went into battery. I tried that again, with the exact same results. I didn’t disengage the slide lock. I didn’t pull the slide back and release it. I inserted a magazine and the gun went into battery, chambering the first round.  It did this almost every time.  But not every time.

This is a design feature – one of which I am not a fan. That said, chambering a round fast on a full magazine is not the worst thing in the world; some people surely see it as a plus, or even as a feature. Especially in competition. A few people have told me their HK pistols do this, as well as some other manufacturer’s guns. I’ve had pistols that had this same on-again off-again “feature” and I don’t have any of them anymore.

Other than the slide and barrel decoration and the rotating bolt, the X-Claiber’s other “distinctive” feature: the truly massive ambidextrous plastic thumb safety. I’m a guy who likes to shoot 1911s with my thumb resting on the safety, so a continental plate-sized thumb rest hanging on the back of the gun may seem like a good idea. To me, it’s not.

First, the “on” position of the safety is too high, a bit of a reach. Also, the safety’s jumbo size makes it too easy to disengage. For range use, this feature is acceptable. Otherwise . . . even a light catch on my shirt from the draw would disengage the X-Calibur’s safety. The switch is also uncomfortable after long strings. The material is too thin and acts like a blade into the middle of your thumb. Shoot 50 rounds or so and it isn’t a problem. Shoot 500 and it’s an issue. 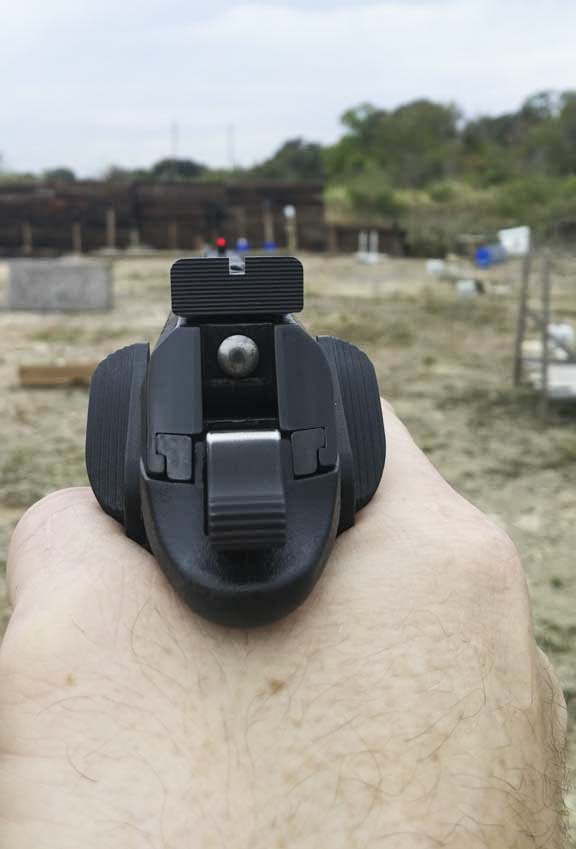 Grand Power includes a smaller sized safety with each gun if, like me, you like your safeties smaller. I highly recommend making the switch. 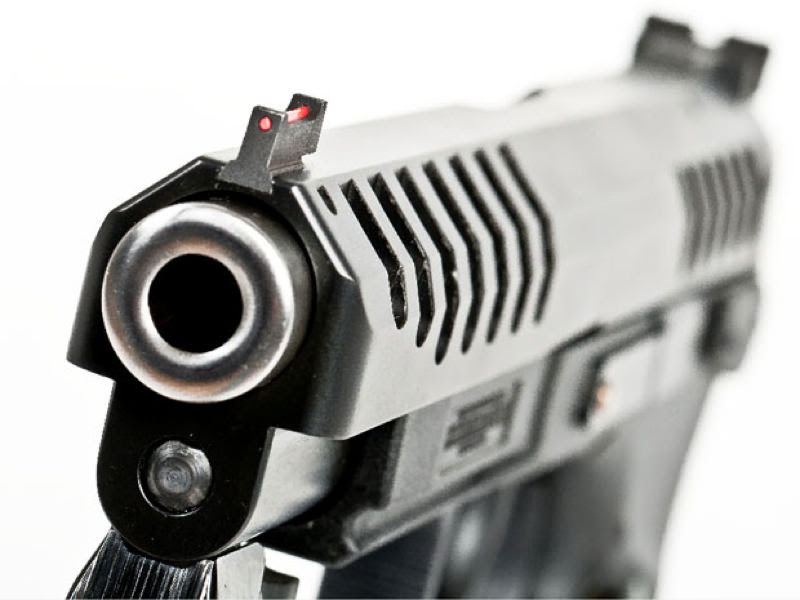 That cut slide, and low bare axis combined with that bright front sight made for fast shots on small targets. Traversing targets was particularly rewarding. It’s a fast gun. I would have liked a little more weight on the front end, but man, that gun would move, and then stop on targets most riki tik. 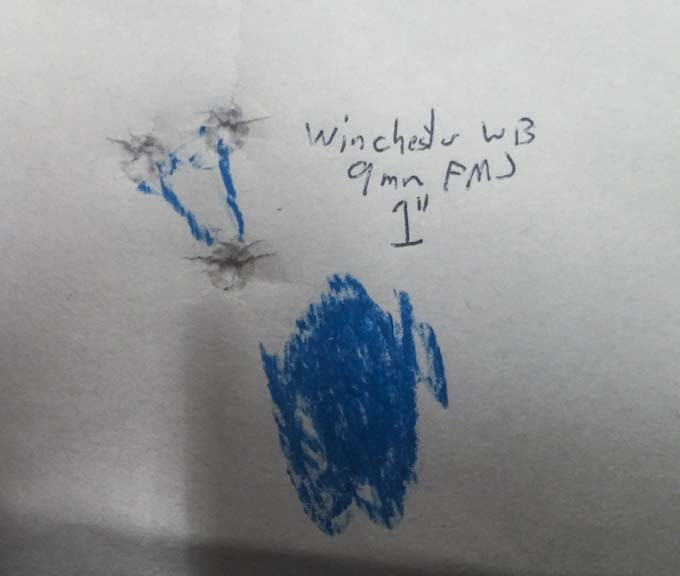 With some practice, I could shoot the 5 1/2″ plate on the dueling tree at 15 yards. Better yet I’d be ready to shoot it again by the time the paddle swung around to the other side. Now that was fun. I spent a goodly amount of time, and ammunition, running a mockup of an IDPA classifier stage. 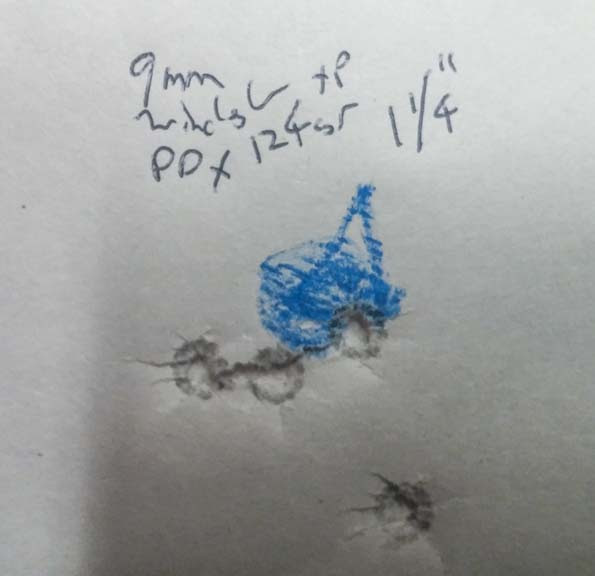 Which brings me to the gun’s reliability. Other than the immediate chambering of a round highlighted above, I shot 520 rounds with zero failures. This was over three days, one of them which was raining pretty heavily, with no cleaning of the gun of any kind. I did Rem-Oil it prior to the first shot.

In addition to the Winchester and Wolf FMJ rounds, I also shot Winchester PDX 124gr +P and 124gr Federal Hydra Shock round without any problems. By the time I finished shooting, the gun was dirty from carbon, and had plain old dirt and mud in it from repeatedly dropping the mags onto the muddy ground, reloading it, and reinserting them into the gun. It just kept running. But does the gun sacrifice accuracy for reliability?

It does not. Nothing I shot was more than a 2-inch group at 25 yards. The PDX round shot 1 1/4 inch groups at 25 yards off a bag, and the Winchester FMJ round shot a solid 1″ group over and over again. At the seven yard line it’s impossible to tell if I shot three or 15 rounds through the target. It’s just one hole. That’s exceptional.

The rotating barrel X-Calibur is not your usual handgun. In this case, unusual means unusually good. Remember: this a “race” gun, not an everyday carry piece. As such, I’d love to see it in the hands of a pro-shooter like the lovely, articulate and plain speaking Jessie Duff. I don’t think she’d be disappointed. And neither will you – once you sort that going-into-battery thing and wing masquerading as a safety.

I like the slide cuts and the fluted barrel, but I usually do.

Reliability * * * * * and ZERO
That intermittent slide returning to battery upon magazine insertion is a deal killer for me.  It might not be for you.  Otherwise, this gun runs perfectly.

Customize This * * * *
The gun comes with a rail, four back straps and great sights that you can take off if you want. Considering the purpose of this gun, you’re already where you need to be right out of the box. Mounting an optic would require significant gunsmithing and it’s not threaded.

Overall * * * *
Based solely on its running performance, this is a five-star gun. Chambering upon magazine insertion dropped this gun from my very, very short five-star list. As a sport gun made to run in the production class, it runs very well. Fast, highly maneuverable, and very accurate. Swap the large safety with the standard-size one and you have an ideal gun for its intended purpose at a very reasonable price.
Added by Jeremy S. — I have TriggerScan data on a new Grand Power. SA clocks in at 4.3 lbs and DA at just under 11 lbs. Total travel distance before the break, including takeup (slack), is just 0.136″ in SA and 0.615″ in DA.