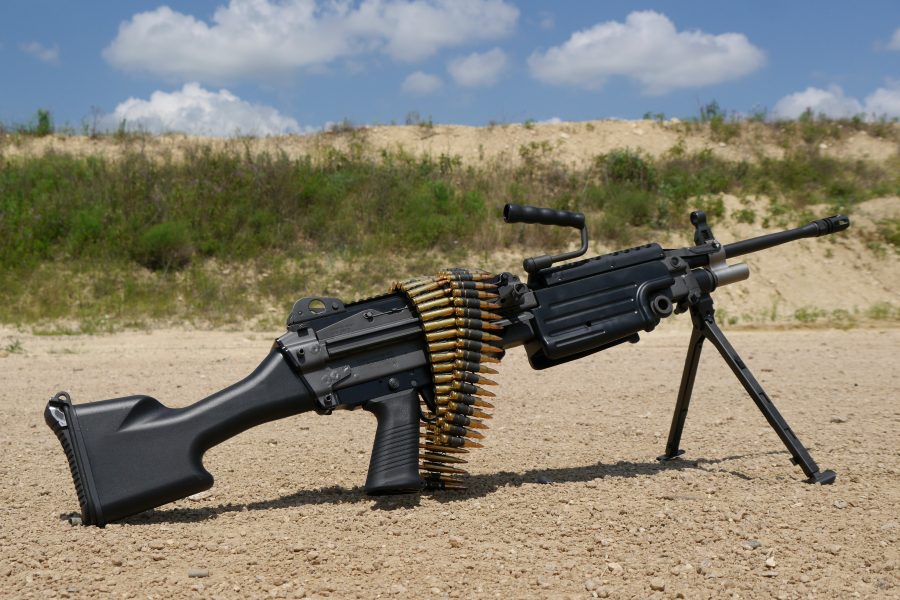 FN Manufacturing has been cranking out weapons in Columbia, South Carolina for the U.S. military for years now, winning contracts for everything from the infantry man’s friend, the M4, through the explosively fun M240B. Up until last year the civilian side of the house had been forbidden from offering civvy-legal versions of their military guns — the closest we’d gotten was their FN-15 rifle released in 2014. But last year all that changed and the “Military Collector” series was born. Now the average American can purchase a proper M4 or M16, spec’ed out exactly the same as the military gets them (minus the full-auto setting, no matter what you may hear on MSNBC). The most awesome offering in this collection so far: the Military Collector M249S.

The original M249 was developed in the early 1970’s. The U.S. military had briefly fielded the Stoner 63 light machine gun (LMG) in Vietnam as a way to provide front line troops with a lighter machine gun that was easier to maneuver through the thick brush and jungles of the area, eventually looking to replace the much heavier M60 and M2. While the Stoner design had worked, the military wanted something better. A Belgian company called FN had been in development of their FN MINIMI LMG for a few years by the time the U.S. decided to look for a replacement, and in a head to head competition in 1980 their design beat out both H&K (HK21A1) as well as Colt (who just thickened the barrel on an M16 and called it good) for the contract.

Something to note about the M249S is that it is a bit different than the other offerings in the Military Collector series. Where the Military Collector M4 is identical to the as-issued version, the M249S is instead a mix-and-match version that has been cobbled together from different eras of the M249 to create the most visually appealing and enjoyable example of the firearm possible. The purist inside me is complaining, but the execution doesn’t leave much room for argument. Starting out at the front we can see the most glaring difference between the “as issued” version and the M249S. The current military version of the M249 ships with a handguard so festooned with rails that you’d think Union Pacific designed it. That’s great for modularity in combat, but it also means that one of the cool features of the original design is gone. An under-folding bipod was originally designed to fit under the handguard on the firearm but the need for more rail space removed that feature. FN brought it back by reverting to the older (but slimmer and lighter) slick-sided polymer handguards.

While the handguards might be different, the barrel assembly is identical from the heat shield on top to the carry handle at the rear. You can swap your barrel between an M249 and M249S without any issues and never notice a difference in style. The only change here is that while the more common version of the M249 ships with a short barrel the M249S comes with a 20″ version that is NFA compliant. Those who purchased a limited edition collector’s version of the rifle (which comes in a nifty hard case) will get both a 20″ barrel and a standard short barrel for when the tax stamp comes back. The standard version only comes with a single 20″ barrel assembly. For those wondering what the “standard edition” M249S ships in, here’s a look at how it arrived at Capitol Armory in Austin, TX. Like most of FN’s other guns it comes in a plain brown box — nothing spectacular, but definitely enough to protect it while shipping. Moving a little further back on the rifle we can see one of the upgrades that FN has made to the gun since the 1990’s. The tray cover on the firearm used to be flat topped to reduce weight, but sometime in the 1990’s FN started producing them with a built-in Picatinny rail to easily mount optics. A word to the wise for those looking to put an Aimpoint on their M249S: you probably won’t be able to get a proper cowitness even with a straight flush mount. The iron sights are just too low on the gun for that to be useful. That said, it still might be worth your time and money to make that happen. The single biggest change to the M249 comes in the firing mechanism. For the “real” version the firearm uses an “open bolt” operating system meaning that the firing pin is fixed and the weapon fires as soon as the bolt slams home on a live round in the chamber. This has been verbotten for some time for civilian ownership so FN needed to make the gun a “closed bolt” system instead. Rather than re-working the entire firing mechanism FN simplified the process by implementing a large hammer (pictured above, in the center of the spring track) that is held to the rear just like the bolt in the open bolt version and is activated by the same firing mechanism. Supporting that change is a second spring for the hammer, located surrounding the return spring for the bolt.

Also pictured: some new rails. FN was required to re-design the system slightly to ensure that ONLY a semi-automatic bolt can fit into the gun. FN accomplished this by designing an extra rail in the firearm that will keep any full-auto bolts from being placed inside.

Despite the design changes inside the gun there isn’t really a big difference in the disassembly and maintenance process. The gun comes apart mostly the same way, but that firing pin striker (“slide hammer”) provides a minor challenge. Thankfully FN has produced a series of videos specifically for the M249S detailing every aspect of usage and maintenance, including field stripping and cleaning. Back at the rear of the gun FN has fitted the more iconic Mk. 48 buttstock to the end of the gun rather than the skeletonized version that originally shipped out with the Marines in Desert Storm or the collapsible “para” version that served in Afghanistan. I’m pretty okay with this change, since it provides a more striking visual appearance to the firearm than either of the other options and also is somewhat cheaper to produce. I didn’t have any complaints about the fit and finish of the stock, and it felt very good on my shoulder when firing either from prone or offhand. In short, I liked it.

Speaking of shooting the gun, that might be the most fun part. Testing was done in two stages: bench testing and field testing. One of the very first things I did with the M249S when I got it out of the box was take it to the local 1,000 yard range. There’s something highly entertaining about walking onto a firing line festooned with Surgeon actions and multi-thousand dollar pieces of glass, whipping out an M249 with iron sights, and knocking the stuffing out of some steel targets.

Even without magnification I was able to hit the 250 yard steel target (30 cm circle) every single time. Moving further down range, a quick twist of the elevation knob on the rear aperture re-zeroed the gun for 500 meters (there’s calibrated markings on the knob all the way out to 1,000 meters) and I was knocking that similar sized target about 50% of the time. This proved that the calibration markings on the elevation knob were accurate, and also proved that the gun was accurate enough to make the shot. Adding some glass to the top rail should increase that accuracy but for a belt fed LMG I think that’s about as accurate as I expected.

The next thing I did was take the M249S to my local carbine match. The plan was to load a single belt of 5.56 ammunition and never have to reload, and while the belt definitely lasted the match director made sure that I did indeed need to reload.

The first stage or so went well, the gun feeding perfectly using a 200 round belt feeding from the attached box. As the gun heated up and the day wore on things started to get challenging.

One of the design requirements for the M249 was that it be able to accept standard M16 magazines in an emergency and use that as an ammunition source. On stage #2 I decided to test out this functionality and it didn’t work very well. The gun would feed a few rounds, but eventually the rifle would fail to go completely into battery and I would have to rack the action to get the gun running again. I tried a different magazine on the next stage and had the same issues. Feeding from the belt was always pretty reliable, but feeding from the magazine was a complete crapshoot.

And then the gun started failing to go into battery every so often with the belt as well. It wasn’t nearly as regular, but it was still annoying. A little testing after the match revealed a lesson that applies to many aspects of life: nothing keeps things running smoothly like a good slathering of lube. The gun hates being run while dry almost as much as [reference redacted to maintain PG-13 rating]. For those looking to use it in competition shooting or other events I highly recommend lubing the gun up before every stage to ensure that it will function.

As for comfort, the gun is an absolute beast to wrestle around a shooting competition. I know that I’m not the most in-shape person in the world but by the end of the match my arms felt like I had spent the morning in the gym with Tyler Kee lifting heavy things. The ammunition isn’t even the heaviest part — the gun is over-engineered in order to provide reliability and accuracy during sustained strings of full auto fire. When you’re firing as slowly as I was (still as quickly as possible but nowhere near the cyclic limit of the platform) there’s not much need for the over-engineered receiver and chunky gas system. A standard AR-15 works just fine, but definitely not as cool. As cool as it is to walk out on a range and whip out an M249S to play with, that ego rush comes with a hefty price tag. MSRP on one of these bad boys is $7,999, and that doesn’t include any links for ammo belts. The only thing comparable in the market is the ARES-15 MCR, the product formerly known as the Shrike upper, which allows you to use a linked ammunition belt on a standard AR-15 receiver. MSRP on that is close to $5,000.

Still, there’s something inherently cool about owning an M249. Beauty is in the eye of the beholder after all, and for some the envy of all their friends and eternal “cool guy on the range” status is worth the $8k.

Reliability: * * *
Keep it wet and keep it running. When it starts to dry out is when you have problems. Also, while box magazines might work it isn’t recommended that you rely upon them.

Customize This: *
There’s a rail on the feed tray cover, and the gun takes standard M249 parts. Mostly. That said, there aren’t many replacement M249 parts on the market. Not that you’ll need many.

Overall: * * *
I like it a lot, but the price tag is bumming me out. If I’m honest, there really isn’t much you can use the 249S for beyond a range toy. Hog hunting maybe? Posing for pictures with Israeli supermodels? Home defense? Sure, if you want to set up a nest at the top of your stairs I can definitely see that. Other than that, it’s as useful as the I Am Rich app. That said, this thing is still an absolute blast to shoot and an amazing piece of engineering that I’d love to own and enjoy. If only I had eight grand.

Stolen Valor: Gunmaker with DoD Contacts Falsely Claims to Be a Green Beret