FN USA has released a series of its full auto firearms used by the U.S. Military to civilians in semi-automatic models. The FN 15 Military Collector M4 is their release of the current U.S. service rifle, also made by FN in South Carolina I got ahold of one to see how closely it matches the rifles I used in combat. I really didn’t expect to think much of the rifle. After all, I was never particularly enamored with my service rifles. They really were just tools, but tools I could rely on. I was wrong about the FN 15. The damn thing felt like home . . .

The FN 15 Military Collector M4 doesn’t feel almost like the rifles I carried. This gun feels exactly like the rifles I carried in combat in Afghanistan. It has the same rails and rail covers, the same forward grip, the same stock, same charging handle and the same overall barrel length. FN gets away with the 14-inch barrel by welding the flash hider onto the barrel, making the overall length of 16 inches. The trigger on the FN Military Collector M4 redefines “mil-spec” — in a good way. I weep for the new soldier that gets issued these rifles, as they will never know why we derided our triggers so long and so mercilessly.

This one has a little bit of creep, followed by a thud of a break at just over the 5lb mark. World class? Not by any means, but it’s light years better than any of the service rifles I ever shot and better than the vast majority of aftermarket AR15s sold today. Infantrymen today will have an experience we never encountered: leaving the military to own a rifle with a worse trigger than the one they were issued. They will also be unaware of the “Bang…SPROIIIIING” of the buffer and spring against their face. The FN15 M4 doesn’t use any kind of silent spring system, but the experience is same. No annoying vibration in your ear. Poor kids will never know. The horror…the horror.

I never used any of my service rifles in full auto or burst fire in combat and neither did anyone else in my teams. It was always semi-auto fire. If we needed full auto fire, we used one of the crew-served weapons. Given that, I really didn’t miss the full auto setting at all. The giggle switch was really just that, purely for fun. 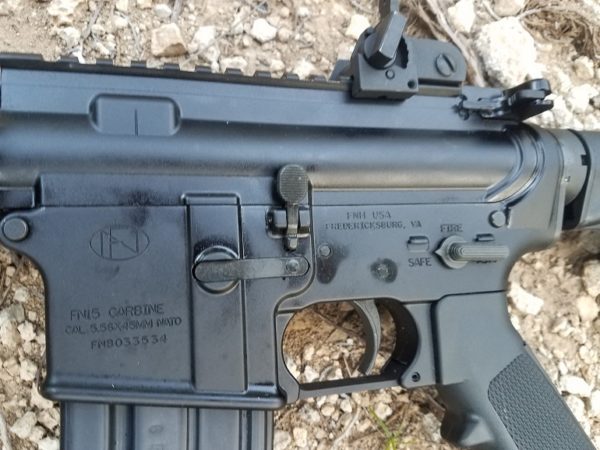 What is slightly different from the Colt M4s I carried in combat (but completely authentic with the current FN made M4A1s being shipped to our service members):  the Unique Identification bar code marked lower receiver with an ambidextrous safety.

I didn’t have an ambidextrous safety on my Colt M4s and I’ve never put an ambi safety on any of my guns. But I like it. I find it very natural to take the safety off with my thumb, but put it back on again with my trigger finger after it has come off the trigger.

The FN 15 Military Collector M4’s safety, regardless of right or left side, snapped on and off quickly and surely, never getting stuck in an in-between position. Using either the supplied steel magazine or 30 round PMags, I never had failures or stoppages of any kind. Just to see what would happen, I went ahead and buried the semi-auto service rifle in a cedar mulch pile and shoveled some dirt into the open action. I dropped the mag, shook the dirt out, cycled the bolt a few times, and dumped a magazine of M855 out without issue.

I did no more than boresnake the rifle a few times and spray a bit of Rogue American Apparel’s Gun Oil in the action and down the barrel prior to shooting. I never had to perform SPORTS and the rifle needed no maintenance of any kind. 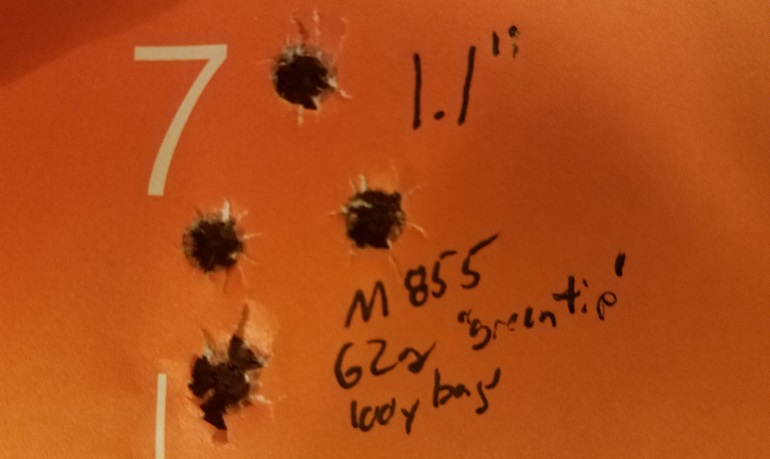 The only time I got the rifle to break the 1 MOA mark consistently was with my own hand loads, pushing a 77gr HPBT SMK with 23.5gr of Varget powder. That load scored 0.9″ and the group was so consistent that NASA is now calibrating their instruments to it.

The FN 15 Military Collector M4’s shorter barrel, with a 1:7 twist rate,  certainly likes the heavier grains. I would expect that the Mk262 77gr OTM would also score particularly well in this round, should you choose to stick with all .mil pills.

All of the shooting was done on a dirty bore, starting at the 480 round mark and using the Atibal Nomad 3-12 scope. I also shot the gun quite a bit with the basic iron sights. It’s a good set up, with the standard fixed triangular front post off the barrel and a rear pop-up peep sight that is windage and elevation adjustable.

Even at it’s worst, the 1.5″ groups, this is significantly better than any of my service rifles ever shot. 2 MOA was usually the norm for any of my Colt M4s and frankly, given the ballistic limitations of the M855 cartridge itself, that was good enough.

The army says the effective range of the weapon system is about 550 meters. At that range, the round is generating plenty of energy to kill the opponent, but only if it is in just the right place, and rarely quickly. 2 MOA still puts that round inside the chest cavity at 500 yards. 1.1″ puts you inside the head, again, on a really good day.

The almost twice as precise FN M4 is a huge improvement over my service rifles, and one I would have very much welcomed in Afghanistan, where my initial engagement distance was usually about 400 meters. The FN’s trigger is good, but there are better out there, and I prefer a single stage trigger with a flat shoe. I also like a big boy charging handle; this one is the mil-standard. I’m also partial to silencers. With the FN 15 Military Collector M4’s flash hider permanently attached, that’s a no-go. And while we’re at it . . . I like a better stock, a better pistol grip and a slim-line handguard with just a few pieces of rail. Finally, I like a piston driven gun.

In short, if you want the “real deal” minus the full-auto capability that soldiers almost never use anyway, the FN 15 Military Collector M4 is the gun for you. But if you want better, there’s better out there for this price. FN makes those, too. Still, there’s no doubt in my mind that this is the best M4 ever made. The rifle FN is fielding to our service members is a great gun; our men and women in uniform should have a lot of confidence in this rifle. And if you want to have the same gun they have, or maybe you used to have, this is it.

Style and Authenticity * * * * *
This is the M4 minus the selector switch to full auto. When it comes to the rifle I used in combat and how I used it, it’s not “close to the real thing.” It is the real thing.

Customization * *
You can swap just about everything, if you no longer want the “M4” furniture. But not the flash hider, that’s on for good.

Reliability * * * * *
It fired everything without issue. No problems loading, firing, or ejecting any round put through for over 500 rounds.

Accuracy * * * *
About 1.5” groups with common military ammunition. That’s more precision than any of my service rifles ever achieved.

Overall * * * *
This is the new military standard. It resets the bar on what “mil-spec” should mean for AR15s. Yes, the vast majority of the gun is the same as you’re used to, but the better trigger and better barrel make for an important improvement over previous service rifles.