CMMG released its BANSHEE series of AR pistols and rifles three months ago, but they’re already expanding the line. Currently it’s offered in .22 LR, 9mm, .45 ACP, and 300 BLK (reviewed here). Now, as of a couple days ago, the BANSHEE is also chambered in the same 5.7x28mm round made popular by the FN Five-seveN and PS90 but available in almost nothing else.

As CMMG built a brand in part by supporting and innovating unique calibers in the AR platform, the addition of the 5.7x28mm Mk57 short-barrel rifle here is likely only the beginning. 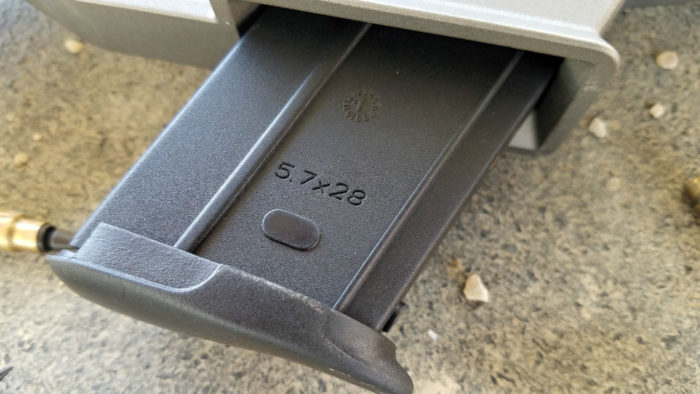 First, let it be known that the Mk57 SBR takes your standard, 20-round, FN Five-seveN magazines. Due to spotty availability of factory FN mags, though, CMMG ships the BANSHEE with a 20-round ProMag magazine. While this would normally have me howling like a banshee, something weird happened during my testing.

Both ProMags I used worked flawlessly, and the factory Five-seveN mag I had did not. I’ll admit my general experience with ProMag has not been entirely positive, so color me surprised that not only were they awesome here but they were clearly better than the OEM part. Even their extended, 30-round Five-seveN magazines get generally solid reviews. With some of the unique projectiles I had handy — most notably the large, 55 grain subsonic rounds from Detroit Ammo Co (not pictured) — the bullet-shaped grooves in the front of the FN magazine didn’t play nicely. The projectiles would stick or drag in there and the follower would bind. As the ProMags have no inward-projecting part and leave much more clearance for the bullets, they had no such issue and fed everything. Insert a mag into the generously beveled magazine well. No top-mounted 90-degree cartridge flipping magazine shenanigans as with the PS90. 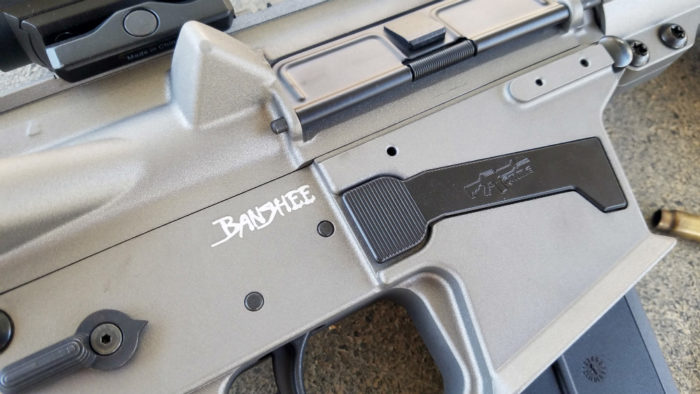 When the Mk57 locks back on empty, you’ll find the oversized magazine release paddle right where you’d expect. Should the gun fail to lock back on empty or if short-stroking or other cycling issues arise, you may want to swap for the lightweight buffer.

I was surprised to find that the 55 grain Detroit Ammo subsonic rounds cycled quite reliably with the heavy buffer when suppressed, though they didn’t throw the bolt back quite far enough to lock open on empty. Swapping for the light buffer fixed that completely and also resulted in more confident ejection of empty brass. The bolt carrier is a skeletonized job, made light in weight for the gentle push of the 5.7×28 cartridge. Note the gas tube-less gas key and round bolt cam pin. That’s right, this is a blowback-operated firearm, but it isn’t a straight blowback. The bolt head truly locks into battery, rotating and locking its lugs into barrel extension lugs just like a standard AR-15. The difference is an angled rear corner on each of the locking lugs that matches up with an angled corner in the barrel extension’s lugs. The rearwards push of the fired round causes the bolt to rotate along those angles until it unlocks and everything cycles rearwards.

This is CMMG’s Radial Delayed Blowback action, and it’s awesome. Whatever amount of delay it achieves over a straight blowback design is enough to be obvious and much appreciated. It’s enough to send more gas and pressure out the muzzle and less out the ejection port. It’s enough to provide a gentler, smoother recoil impulse.

A suppressed CMMG in 9mm is quieter and smoother than a suppressed straight-blowback 9mm AR. It also allows safe and reliable function with hotter calibers like 5.7x28mm, of course, but also 10mm and others. CMMG…is the 10mm next? (please)

This Radial Delayed Blowback system was first seen in the GUARD series of rifles and pistols, released around April of 2017. The BANSHEE line, actually, is part of the GUARD line — essentially it’s a GUARD that comes with the shortest barrels lengths CMMG offers in any given caliber plus upgraded components such as an ambi safety, large charging handle, RipStock stock (or a Gear Head Works pistol brace), etc. I’ve come to really like the RipStock. While it wiggles more than I’d prefer — especially considering it’s CMMG’s stock on CMMG’s receiver extension — it nails the lightweight, compact, fast, utilitarian, and comfortable things dead on. To extend it, all you do is pull it rearwards. It rips through up to five of its adjustment stops and locks in place. Whether it locks at stop one or stop five is up to you; adjust its built-in travel stop with the included set screw. I had a blast shooting this thing. Even though my AAC Element 2 isn’t technically rated for 5.7, I abused the heck out of it with nearly 400 rounds sent downrange in short order and more than a few mag dumps. It held up just fine and the Mk57 was fairly quiet and extremely pleasant to shoot.

As you can see in the slow-mo mag dump in the video above, 5.7x28mm is super soft-shooting. Those lightweight bullets don’t generate much recoil and the delayed blowback system does its job, too. The Mk57 simply stays parked right on target. It twitches instead of recoils. Of all the ammo I had for this review — Federal American Eagle 40 grain FMJ, Detroit Ammo 55 grain subsonic, the extremely pointy Vanguard Outfitters 34 grain Black^Fang, and Elite Ammunition’s ProtecTOR and PenetraTOR — the Black^Fang felt the snappiest. Though we’re still talking like half the recoil of a .223.

Which ain’t bad considering, depending on barrel length, this sharp little 34 grain copper pill flies downrange at between 2,150 and 2,825 fps. The flat trajectory of this cartridge and the range of bullet designs (including ballistic tip) make it great for varmint and coyote hunting. Not to mention the potential home-defense capabilities of a handy little package like this that’s easy to shoot and hearing-safe when suppressed. At 75 yards, groups were good but not fantastic. American Eagle 40 grain clocked in with about 1-inch spreads as seen above. And the subsonic fodder — crazy quiet, by the way! — opened group sizes up further. Still not bad, though. Tight enough to be confident on a squirrel inside of 75 or more yards, for instance. 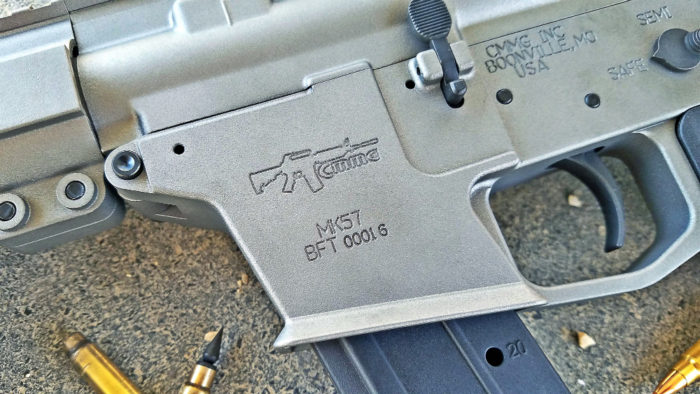 With no cleaning, no added lubrication, and 400 rounds fired almost entirely suppressed on an oppressively hot and dusty Texas day, the Mk57 BANSHEE never stopped (well, aside from a stuck follower in the factory mag). It’s hilariously fun to shoot and it’s about as compact and lightweight as it gets. As we’ve found with all of CMMG’s GUARDs and BANSHEEs, the Mk57 is a very well-sorted and well-tuned gun. Everything fits and functions perfectly and feels like it belongs together. It’s smooth and precise and confident. And I gotta say, whether you’re a fan of 5.7x28mm or not, it’s a hell of a fun round to shoot and this is an awesome firearm from which to shoot it.

Reliability * * * * *
Flawless function. The more I shoot it, the more I like CMMG’s Radial Delayed Blowback action.

Accuracy * * *
Not bad, but nothing to write home about. A faster twist rate may have helped with those subs.

Customize This * * * * *
At the end of the day, it’s mostly a standard AR-15. You can change just about anything. Though, with an oversized ambi charging handle, ambi safety, cool stock, M-LOK handguard, and Magpul furniture, it doesn’t leave me wanting for much. The mil-spec/parts kit-style trigger could use an upgrade, but that’s about it.

Overall * * * *
With a smoother trigger and a more precisely-fit stock, I’d give the Mk57 five stars without any hesitation…at a lower price point. The BANSHEE line is really nice, but $1,550 is getting up there. If you’re a 5.7×28 junkie, though, or always wanted to be, the CMMG Mk57 BANSHEE is an extremely solid option.