It seems like all of the major firearms manufacturers these days are going after the 3-gun market.And that’s great, since the sport is absolutely booming and the only serious manufacturers making things for 3-gun have been Noveske, Stag, Sampson Mfg and Lancer. But this year at SHOT, a handful of big-name manufacturers decided to take a shot at making a 3-gun rifle, and CMMG’s MK4 3GR was among those whose guns looked the nicest . . .

There are three things you want in a 3-gun rifle. First and foremost, it needs to be accurate. Second, it needs to be fast. And third, it needs to look really, really pretty. On paper CMMG’s rifle hits the mark on each and every requirement, but in the field there are some rough spots. 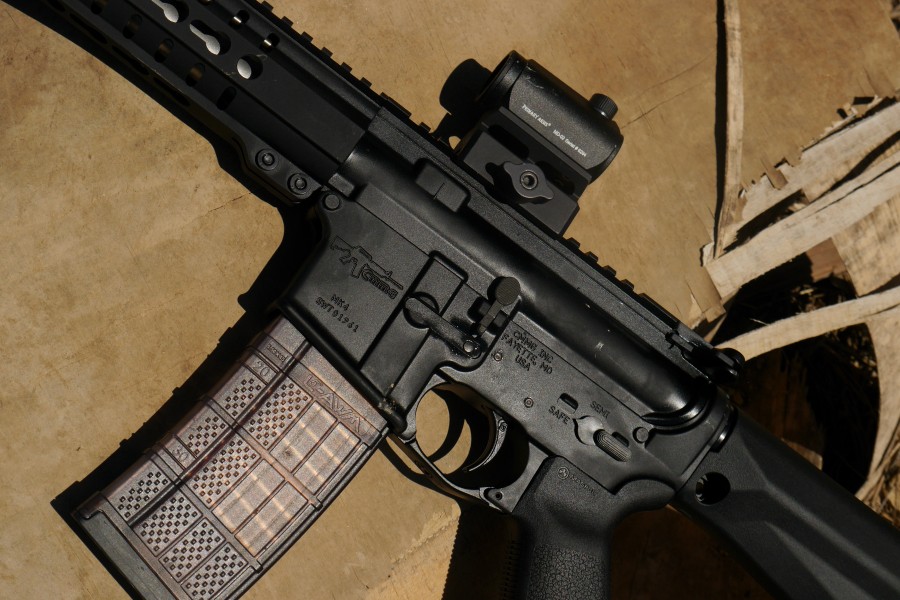 Let’s start with the really nice things about the rifle, and that includes basically everything in the receiver area. CMMG has been turning out good firearms for a while now, and they’ve got an eye for what works and what doesn’t.

For the furniture they’ve gone with the standard MOE kit, including a MOE grip, trigger guard and rifle stock. I reviewed that stock separately a few years back, and for the money it’s the best choice for this kind of competition shooting. Same with the grip. Staying with the Magpul theme I would have liked to see a B.A.D. lever included in the package, but the utility of that particular bolt-on accessory is a hotly debated question among competition shooters.

The trigger CMMG includes is an excellent choice: the Geissele SSA 2-stage. It’s one of a handful of triggers that works equally well in a “run and gun” situation where you need to shoot really fast and a “precision” environment where a 2-stage is preferable. I’ve generally stayed with single stage switch for my guns, but it’s still a damn nice trigger. Out on the forend you have another legitimate improvement: a keymod rail system. It used to be that competition shooters either ran a “slick” handguard with almost no rails or a “cheese grater” system that made it difficult to get your hand around the whole thing.

There were some attempts by companies like Sampson to make a hybrid of the two with pre-drilled holes for additional rail sections, but the proprietary nature meant that it didn’t really take off. The keymod system is a great compromise, allowing the end user to add or remove rail sections to meet their needs, and doing it in a way that’s standardized so you can buy generic rail panels from Amazon.

The top of the handguard is a full-length Picatinny rail, which is okay, I guess. I really don’t know what you’d want to put up there for a 3-gun competition, but I suppose if you want offset iron sights, it might be useful. CMMG decided to run with a lightweight profile barrel and an extremely aggressive compensator for their gun, and usually these would be good decisions. But they also decided that an 18″ barrel was something they wanted to throw into the mix, and that may have been a decision too far.

Let’s start with that compensating muzzle brake. It features a single chamber brake at the end to reduce felt recoil, but it also has two massive slots at the top to act as a compensator and force the barrel downwards after each shot. It’s intended to reduce muzzle rise and allow the shooter to get back on target faster, but there’s a point at which the compensator is simply applying too much downward force.

As those who have seen one too many weight and balance calculations will remember, the further away something is (the longer the “arm” of the lever) the more effect it has on the system. So a muzzle device at 18 inches has much more force on a lightweight gun than the same device at 16 inches, especially when using a compensator this efficient.

Was I exaggerating the effect of the over-efficient compensator in the video? Maybe a hair, to make sure it was visible on camera. But even trying my best to hold the rifle on target, shot #2 was consistently lower than shot #1. The traditional dead-center alpha with a charlie high and left turned into a low and right hole instead.

In the proper shooting stance for 3-gun competitions, the rifle should be recoiling almost straight back into the shooter’s shoulder. Muzzle rise shouldn’t be a big issue. It looks to me like CMMG is overcompensating a tad with their design. 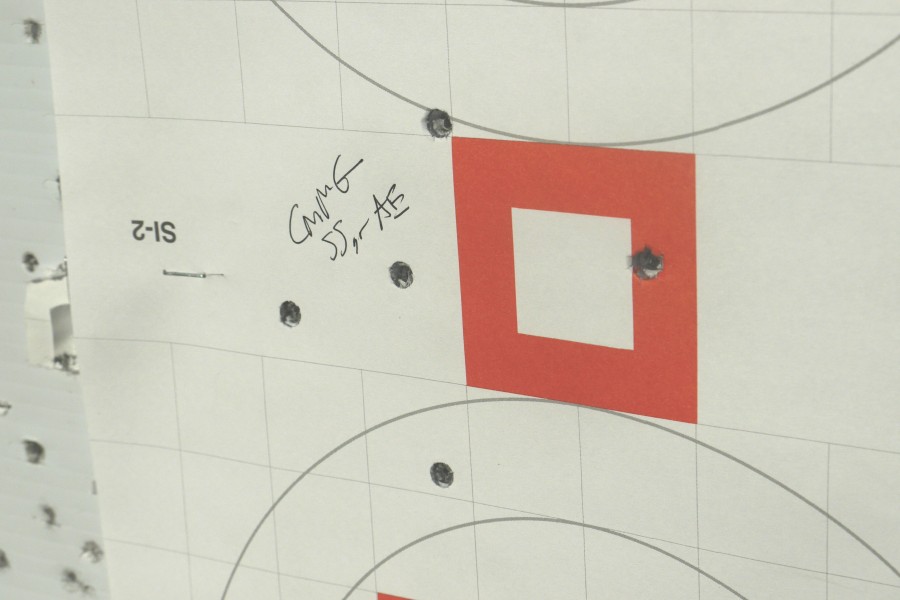 As I keep saying, barrel length has nothing whatsoever to do with accuracy in 3-gun. Daniel Horner was rocking an SBR all last season,and it sure didn’t hurt his long game one bit. The barrel is where almost all of the gun’s weight will come from (well, that and the optic), so the shorter or the thinner the barrel can be made, the lighter the gun will be. Lighter guns mean faster transitions and quicker sprints, but if you sacrifice thickness instead of length, this target is the result you’ll see.

With standard American Eagle ammunition, the gun turns in roughly 4 MoA groups at 100 yards. I tried various weights and loadings of bullets to get the gun to group better, but 2 MoA was the absolute best I could muster. I asked the CMMG rep if this kind of accuracy is normal, and he confirmed that I’m in the expected range. 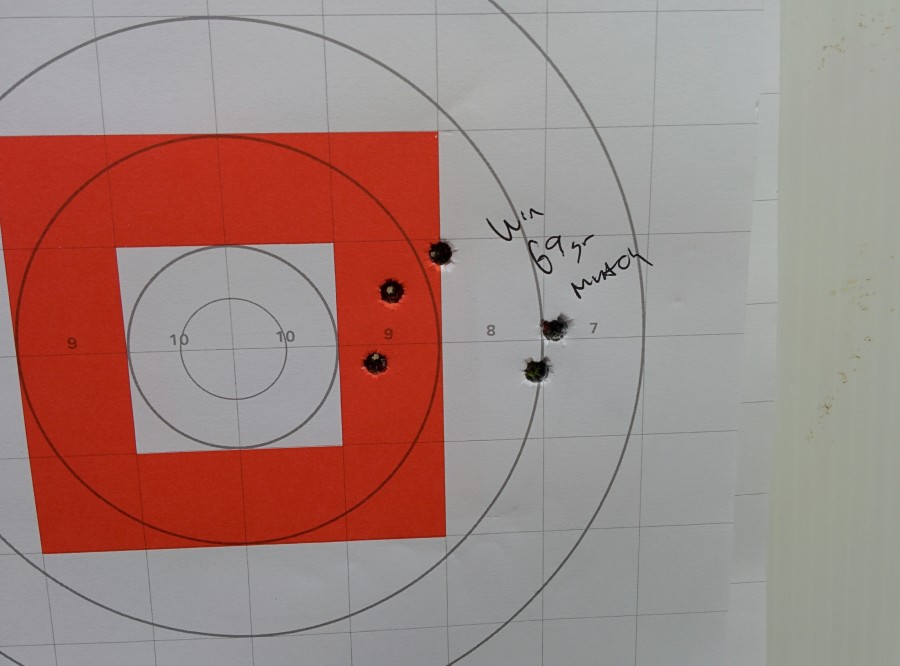 Shooters on the pro circuit had been experimenting with barrel length all season last year, and the result is that most people seem to have agreed on 16″ barrels being just about perfect for 3-gun. Daniel Horner went way shorter, but he’s a special snowflake. The extra 2 inches on an 18″ gun don’t really give you an edge over the competition. Instead, it adds more weight and a longer lever arm for the compensating muzzle brake to act on your gun.

The moral of the story is that longer barrels aren’t necessarily right for 3-gun. While the 18″ barrel was all the rage a couple years ago, it seems to have been replaced about the same time everyone started moving away from side-saddle shotgun shell holders. Now, 16 is the new 18. 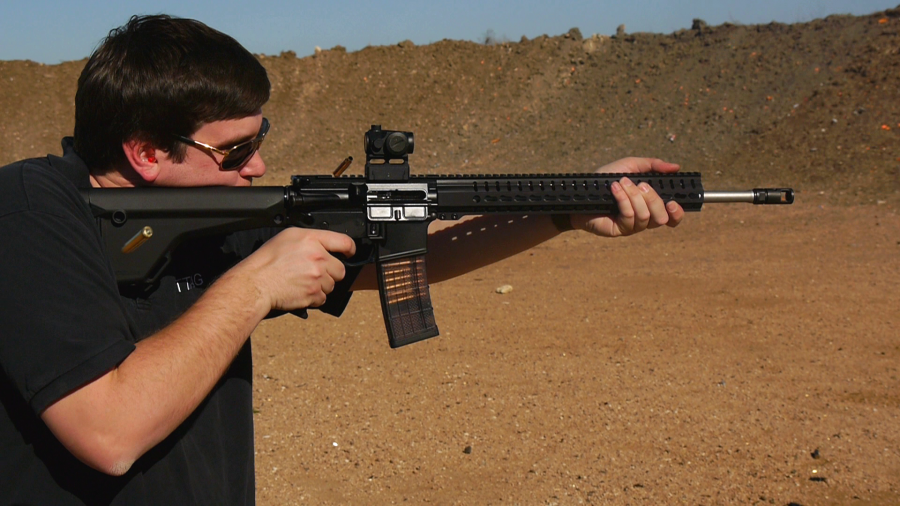 With this gun, CMMG decided to trade some accuracy for weight. And depending on where you shoot and what your local competitions are like, this configuration might actually be good enough for what you want to do.

If you’re in the northeast and close-range competitions are all you have, then the accuracy won’t be an issue. Even at Dean DeTurk’s Topton matches, the longest shot you’re going to make is at 200 yards on a rather large piece of steel. Speed at close range is the more pressing matter, and in that department this rifle delivers.

But if you’re out west where even the local matches involve 400-yard shots, the Mk4 might be a handicap. Those shots are hard even for those of us using Noveske guns and really nice optics, so having a shot pattern that’s bigger than the target definitely isn’t going to result in a happy day.

There are a few other tweaks I’d like to see on a competition rifle. Things like a nickel boron coated bolt carrier and a larger latch on the charging handle. But as-is, it has all of the basic features. It checks all of the boxes. For me, I would like to see this exact rifle with a 16″-barrel and a little less aggressive compensator. I think if they re-distribute the weight savings over the profile of the barrel you’ll see a gun that really gives the big boys a run for their money. As is, the gun is a good start, and for areas where the competitions stay mostly within the 50 to 150 yard range it should be able to keep pace with the other race guns out there just fine. But in longer distance competitions there’s a definite handicap that will keep you from performing to the best of your abilities.

Accuracy: * *
For near-as-makes-no-difference $1,400, I was expecting…more. 1.5 MoA accuracy is about average for this price range, so 2 MoA is one star removed.

Ergonomics: * * * * *
The rifle feels exactly how a competition race gun should. Lightweight in all the right places, and solid as a rock.

Reliability: * * * *
When you fill it with Texas dirt, it tends not to work so well. But under normal operating conditions it works just fine every time.

Customization: * * * * *
The gun gives you tons of options on how you want to set it up, from keymod attachments to QD cups and everything in between.

Overall Rating: * * * 1/2
For me, accuracy is the most important feature in a competition rifle. When you’re being pushed to your personal physical limits you don’t want to have to worry about whether that perfect shot you just squeezed off will be spoiled by a mediocre barrel. CMMG is definitely on the right track, and I can’t wait to see their next iteration of this gun, but as-is it’s rather “meh.” Slightly above average due to the nice features, but overall it doesn’t blow me out of the water.