Ages ago, when TTAG was still in its infancy, RF reviewed the modernized and shiny Charter Arms Undercover .38 Revolver. I’ve tried a couple of the newer .38 snubbies out there, and I absolutely hated the way the big, over-molded rubber grips made it look like I was smuggling a pineapple in my pants whenever I carried them. So when I ran across this very lightly used classic version in a local gun shop, with thinner wood grips and a more 1920’s look to it, I had to try it out for myself. But is it any better? . . . I carry a Wilson Combat Bill Wilson Carry 1911 as my normal everyday carry gun. Well, at least I used to when I lived in Virginia. The temperate climate allowed me to at least wear a concealment garment of some sort (usually just another button-down shirt left open) to make sure I wasn’t printing too much. And even then, worst case scenario, Virginia is an “open carry” state so I could have done away with that whole “concealed” rigamaroll altogether if it was too warm.

Texas is…different. During the summer it’s often too hot to wear anything besides a light t-shirt outside, meaning that trying to conceal a 1911 (even a baby one like mine) is difficult. Factor in the inability to open carry and what you have is a situation where my best option was to leave the gun in the car. That wasn’t good enough for me, so I decided to buy a small wheelgun that I could slip into my pocket on those warmer days. That’s where the Charter snubby comes into play. I tried carrying a tiny Smith & Wesson J-frame of some sort for a while, but there was something about the way the grip was angled that meant it was always peeking out of my pocket. Not so with the Charter .38 — this puppy stays nicely concealed in the depths of my pants all day long. It’s only visible if you take a flashlight and go poking around inside my pockets.

On the outside, though, it does make the pocket bulge just a tad. And by “just a tad” I mean that the thing looks like I have a soda can in my front pocket. Then again, no one ever seems to notice, and putting my hand in that pocket seems to make the bulge less noticeable. So it works for the intended purpose: pocket carry. But does it work as a firearm?

Robert had some issues with his snubby’s timing being off (the cylinder not locking before the hammer drops on the cartridge), but mine has been just peachy. I made sure to test the timing before I plunked down the cash for it at the gun shop and it was solid as a rock. Everything else, though, sucked. 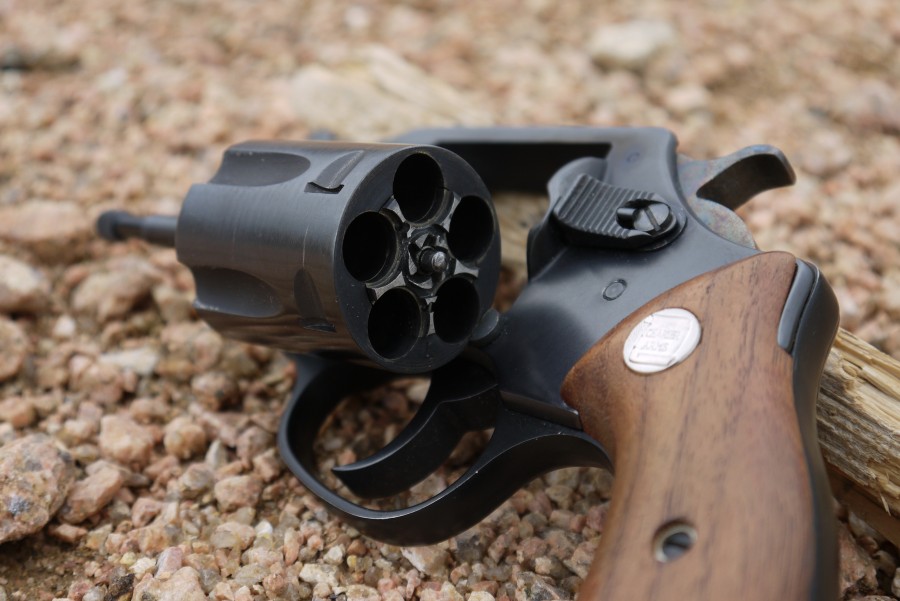 The trigger rates a solid “meh.” The double action pull is long and tough and doesn’t have a real “wall” before the final break, so you just keep pulling and eventually it goes off. And in single action mode, there’s noticeable creep to the trigger. Then, after about 20 rounds, the cylinder release stopped working. The only way to get the cylinder open was to pull forward on the shell extractor rod.

Things only get worse when I tried to fire it. I finally understand why people love those big, over-molded grips so much: they make recoil much less painful. Especially with my gigantic bear-like mitts, every time I pulled the trigger the metal trigger guard would crash down into my knuckles and cause considerable pain. That pain translated into some terrible shooting. I had to move forward to the five yard line to get the pitiful grouping you see here. Despite all that complaining, though, the fact remains that it’s a functional firearm that goes bang every time I pull the trigger. It’s something that’s easy to conceal, cheap to pick up, and light enough to slip into my pocket in the morning and forget about the rest of the day. In short, it works, and for that reason I’m keeping it. Although it might be quite some time before I ever voluntarily take it to the range again . . .

Accuracy: *
Minute of bad guy at 5 yards. Not exactly a tackdriver, but good enough for the statistically average shootout.

Ergonomics (Handling): * * *
Feels great in the pocket, if a little wide. Not much to hold onto when you draw it, though.

Reliability: *
Yes, it goes bang every time the trigger is pulled. Then again, there’s that non-functional cylinder release. Beyond that, it’s like pulling the handle on a slot machine.

Customize This: * * *
Ummm…new grips? Maybe? It does fit into the standard J-Frame sized pocket holsters.

Overall: * *
For its intended function, it works. It’s just a terrible gun in almost every other category.