Some years ago, Century Arms‘ first attempt at assembling CETME-style, .308 battle rifles from surplus parts didn’t go extremely well, and the product was hit-or-miss. The market has been a bit hesitant to dive back into a Century Arms-branded CETME/G3/HK91, but the most recent effort here, the C308, is definitely proving to be a solid performer at an incredibly low price. The C308’s manufacturing process is pretty unique, but it also means that they’re strictly limited in numbers. . .

By marrying U.S.-made parts from PTR Industries, a company with a solid reputation for quality and reliability from its much more expensive HK91 variants, and new, military surplus parts, Century Arms is able to keep the price really low on the C308. MSRP is $699, and standard going rate online is as low as $619.

While using surplus parts can mean both solid quality and low price, it also means limited stock. Indeed, Century Arms purchased all of the remaining CETME surplus. How many complete rifles will come out of this is not known to me, but Century’s assertion that this product at this price is limited to a very specific quantity is almost certainly accurate.

PTR makes the stamped and welded (like an AK-47) receiver, which accepts the very inexpensive — surplus mags in good condition are still widely available from $3.50 to $7 or so — G3 magazines. 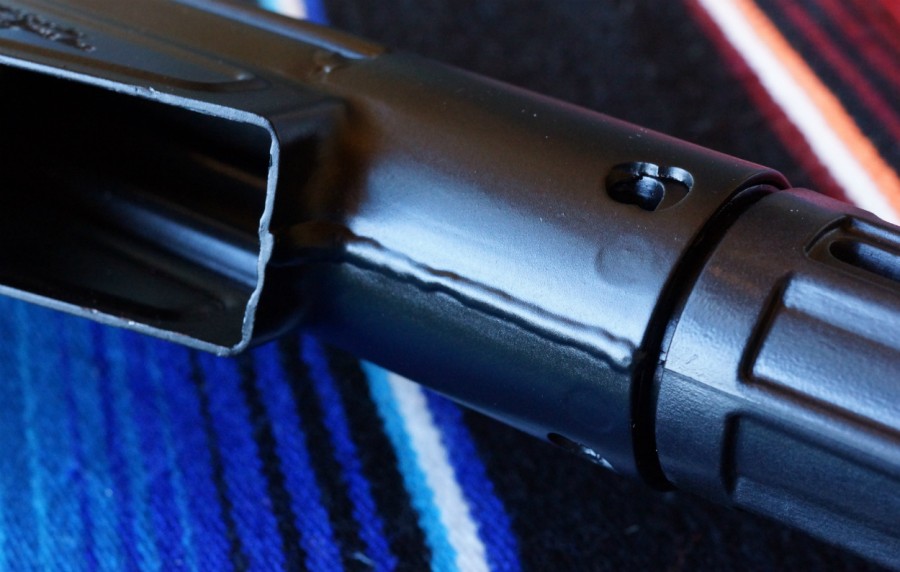 A huge selling point here is the M-1913 (Picatinny) rail that’s welded to the top of the receiver. The CETME/G3/HK91 rifles are notoriously difficult to mount an optic to, and obviously this nearly-7″ rail section takes care of that with a clean solution at the right height. 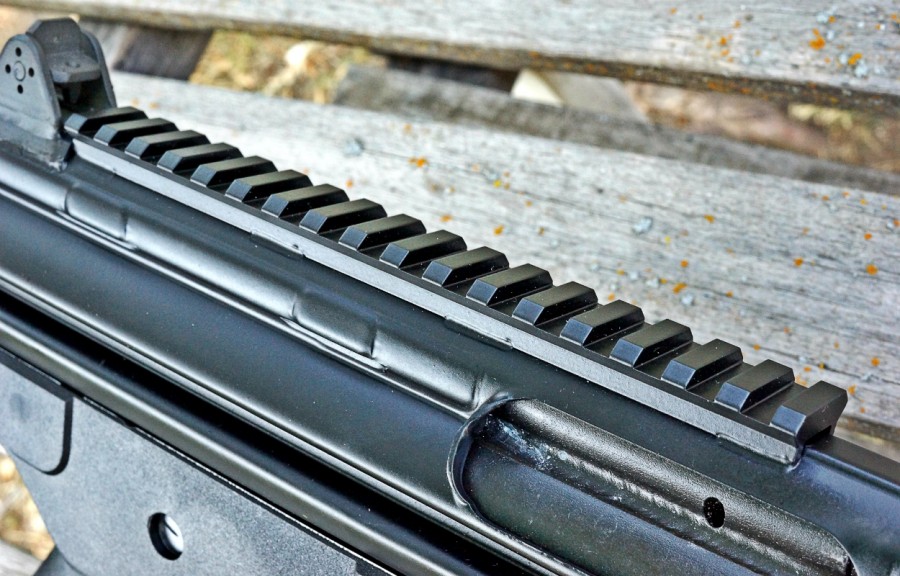 I believe the trigger parts are faithful to the original, semi-auto design, but here’s a glimpse inside for those interested parties: 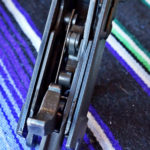 Iron sights are CETME sights rather than your HK rotating barrel style. The rear sight rotates forwards and rearwards like the CZ Scorpion Evo 3‘s rear sight, but with a mushier detent, exposing 4 different apertures: open notch, 200-, 300-, and 400-yard peeps, stamped 1 through 4. 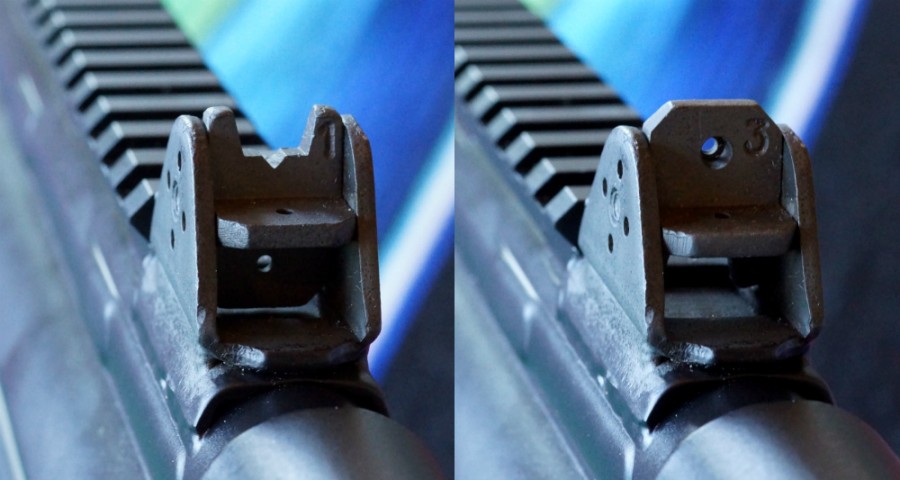 The front sight is a simple post with circular, protective shroud. That round shape does assist in centering the front sight in any of the rear peep apertures. A hole in the top of shroud allows for elevation adjustment. The folding, non-reciprocating charging handle lives far forwards on the left. It can be used to lock the bolt to the rear by lifting it up into a notch, much like the HK MP5, CZ Scorpion Evo 3, and other rifles and sub guns. Also like those, a little bop on the handle sends the bolt forwards with authority, which is an admittedly fun and satisfying way to charge a gun. 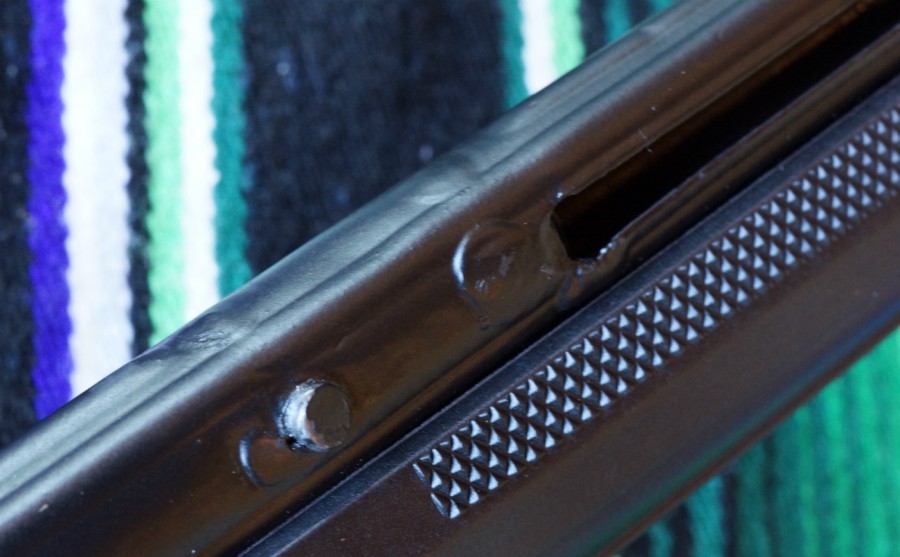 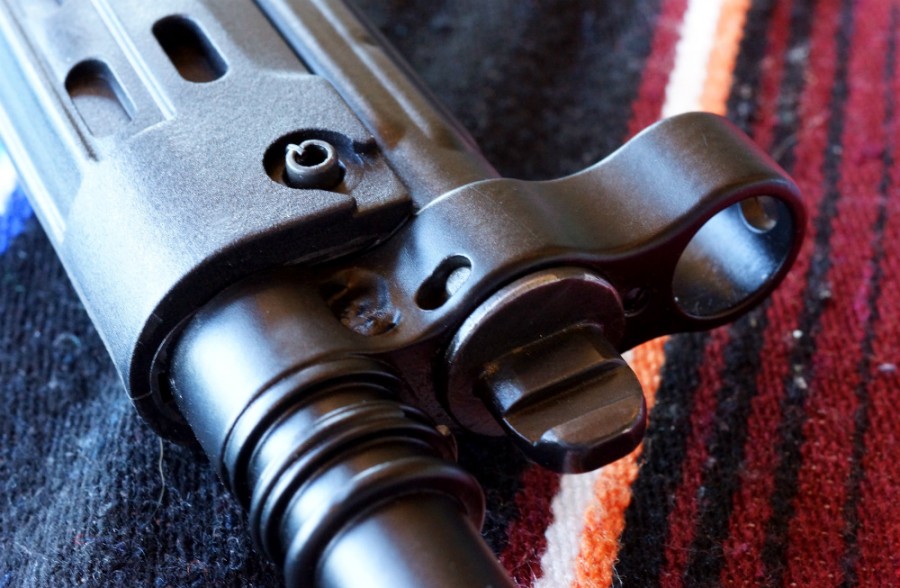 …but there’s a cleaning kit living inside a tin tube in there: Push the two pins at the rear of the receiver out — they can be stored in the two holes in the stock — and the stock and trigger housing are free to come off of the receiver. The charging handle can be used to eject the bolt and carrier out the rear. Pretty quick and simple. The surplus reciprocating parts look to be in great condition, and this is after I put the first 100 rounds through the C308: 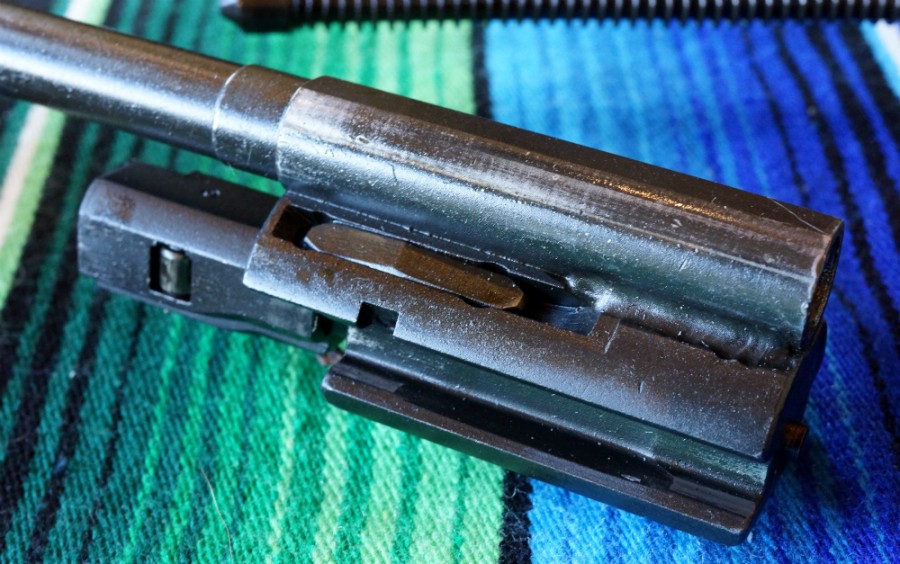 That long bolt in front of the carrier drives the round through the trunnion and into the chamber. It’s a bit unique in just how far ahead of the magazine the chamber actually is, which means the action travels a relatively long distance. Overall, all of the surplus parts like the forend, buttstock, bolt carrier group, charging handle, magazines, etc look really dang good. As good as what I’d expect from most newly-manufactured firearms, and probably much better than what I’d expect to see in any $699 rifle chambered in .308 or similar.

Yeah, it’s a battle trigger. A long, horrifically halting and sticky first stage eventually gets you up against the sear, at which point there’s nearly no creep at all ahead of a fairly clean break with minimal overtravel. Of course, breaking the trigger requires 12.5 lbs of pull force. Good thing it’s steel. Thankfully, the trigger doesn’t have to be released all the way forwards for it to reset, meaning if you can ride the reset — it’s a relatively soft click, but it’s there — you can avoid trudging through that absolute nightmare of a “first stage.” Once my trigger finger had memorized that reset distance, I was actually able to fire the rifle fairly quickly while keeping it on target.

Century’s C308 is a lot of fun to shoot and it proved to be completely reliable for me with the exception of the follower sticking a bit in the 5-round mag. I ran two brands of brass-cased ammo and two brands of steel-cased stuff through the rifle, spanning a range of bullet weights and constructions (FMJ, open tip, and soft point, from 140 to 168 grain), and it fed, fired, and ejected all of it. The fluted chamber left the typical racing stripes of carbon on the brass, but my C308 example left the brass in otherwise excellent shape, exhibiting none of the smashed case mouths and other damage that’s commonly seen on these roller locker guns.

Recoil is controllable and comfortable, but stout enough to be fun. The Chevron brake seems to do a decent job of keeping the muzzle down, but it doesn’t produce any annoying concussion. It isn’t a lightweight rifle, but the C308 balances pretty well despite its length — in part due to lacking the up-front weight of a gas system.

The forend is svelte and sleek and the pistol grip’s circumference is just right, but otherwise I feel like the scale of this gun is for somewhat of a giant. I’m 6-foot-even and reaching the charging handle with the buttstock on my shoulder takes a full extension of my left arm. 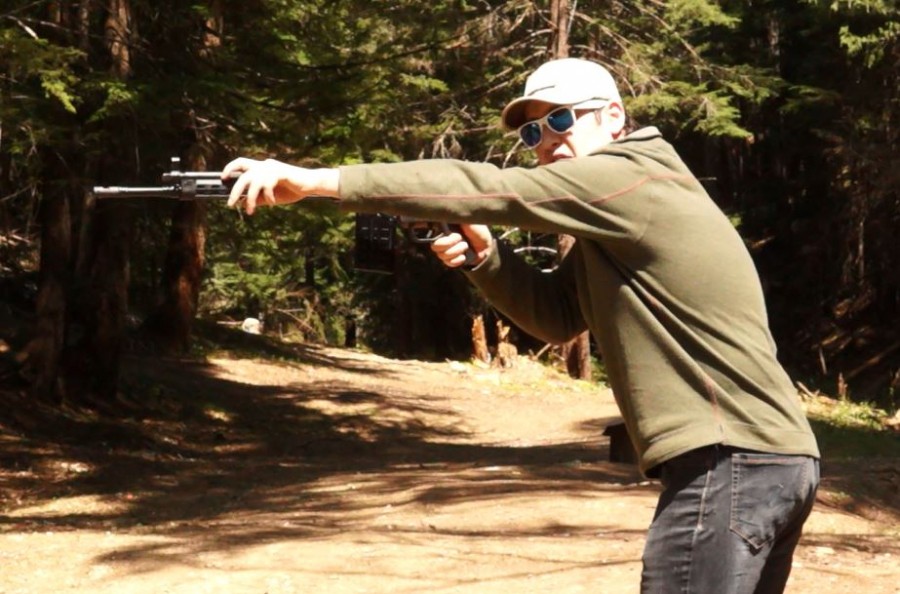 When successfully grasped, actually charging the rifle — especially if the hammer is down — takes serious effort. I’m not sure if many petite folks could even do it. My wife, who’s pretty strong after doing an aerial silks class all winter (“circus school”), can do it but she said it’s “really hard” and it hurts her hand and her hip, which is basically where she had to brace the buttstock in order to reach the charging handle without pointing the rifle mostly sideways.

Then there’s the reach to the magazine release button. It may look like it’s in a similar location as an AR’s mag release, but for my men’s size L hands it’s impossible to touch it, let alone depress it, without breaking my firing grip. 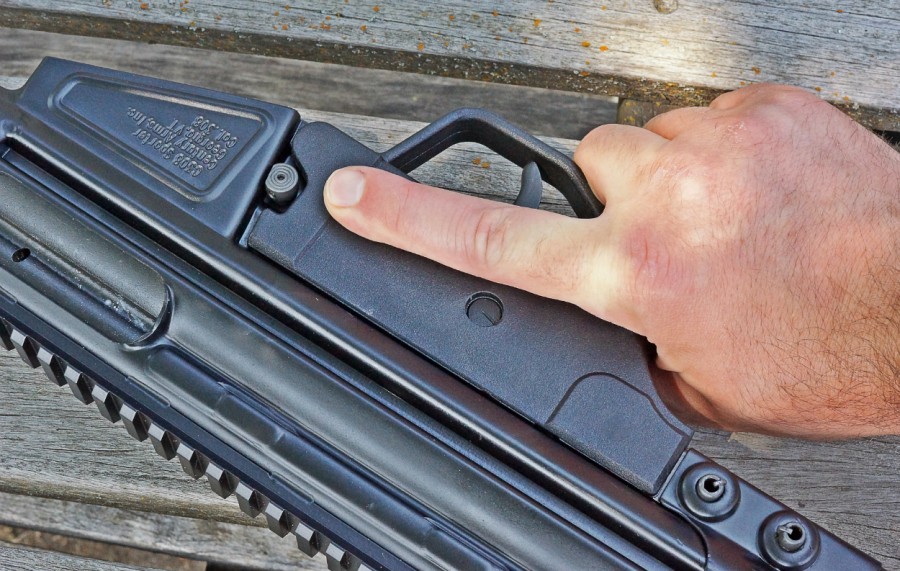 The safety lever is in a familiar-enough location. Due to a tight fit and the polymer trigger housing, it does drag a bit as the ball detent underneath it wears a slight groove into the polymer. It’s starting to break in and I think eventually it’ll hit its stride and operate smoothly while still indexing solidly up (safe) or down (fire). I think that gets the gripes and nit picks out of the way. Ergonomic design wasn’t exactly at the forefront over half a century ago when the CETME rifle first went into production and, yeah, it’s a battle rifle. Sure it’s large, but it’s a pretty good shooter.

Actually, I guess it does fall a bit short in one important category; accuracy. Of course, “falling short” is what you make it, and I told my FFL that I’d be happy if this thing did better than 5 MOA. Well…color me happy, then: The best group, shot, like all of these groups, at 100 yards with sandbag rests and the Lucid L5 rifle scope mounted to the rail, was turned in by HotShot’s 146 grain .308: 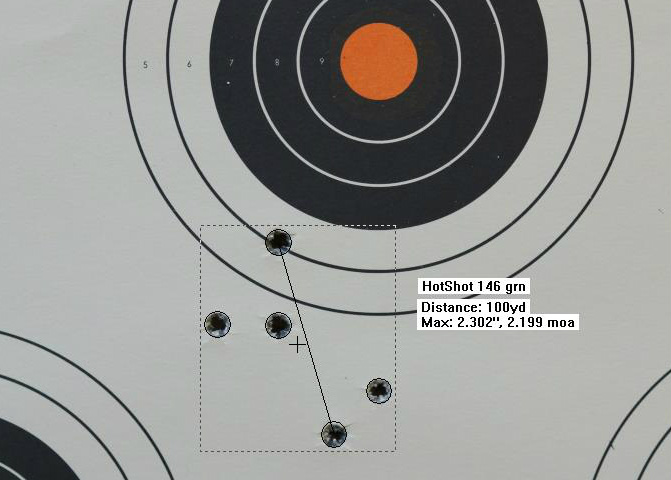 Obviously this is far from sniper rifle performance, but with ammo that the rifle likes it’s within “battle rifle” territory and should be more than sufficient for burying in your back yard until the zombies and North Koreans attack. Or, sure, for hunting hogs, deer, or most North American game within a reasonable distance. Or for exploding watermelons and generally having fun shooting a full-power cartridge on the range.

I’ve had a lot more fun shooting the C308 than I thought I would. I can envision Chris Costa C-Clamping the heck out of that extra long forend, and truth be told it felt pretty good to run it like that. It’s a solid shooter, and it proved reliable even with lacquered steel ammo. The addition of that receiver rail section for mounting optics is a huge plus. Another huge plus is the availability through various retailers of inexpensive surplus parts for replacement or modification (e.g. OD Green furniture), plus 20-round magazines in very good condition for like $6.

It’s not without negatives, of course, although the biggest one might be the C308’s limited production. How many will be manufactured is not known to me, but when Century Arms burns through its cache of new-condition surplus parts, the C308’s are done. With a street price of only ~$650 (seems to be 1800GunsAndAmmo’s going rate), I have to assume they’re moving fairly well.

Accuracy: * *
I’m willing to say it’s capable of 2 MOA with ammo that it likes. Considering the price point, that ain’t too shabby. Of course, it’s a 5 MOA gun with some ammo, so…

Ergonomics: * *
It’s big. Stamped & welded construction leaves some edges. The trigger is terrible. But it shoulders well and I like the sleek forend.

Reliability: * * * * *
The 5-round magazine needed some lube on the follower. With that taken care of, the gun ran like a champ. One nice thing about a blowback action is the simplicity and reliability, and even with the roller lockers adding some complication this design is beyond proven in all sorts of adverse conditions. The fluted chamber is supposed to help extraction, too, and it worked just fine with lacquered steel and nickle plated steel ammo.

Customization: * * * *
The scope rail is awesome, and it opens up options that are difficult to come by on most other CETME/G3/HK91 clones. Additionally, surplus parts still exist to change things up as you see fit, like going with wood furniture or different colors of plastic furniture, original slings, mag pouches, and other accessories.

Overall: * * * *
It definitely falls short on accuracy with most of the ammo I tested — it’s good with that HotShot load, though — and ergonomically it’s a bit of a challenge as it’s large-scale and fairly heavy. However, it’s a reliable, solid shooter in a full-power rifle cartridge at an amazing price, and you gotta love super inexpensive magazines.