Although I’m typically not one that’s interested in the lightest, smallest, or most generic offering out there, the Ruger American Ranch Rifle appealed to me. With a 16” threaded barrel and a weight of just under 6lbs, it seemed like a handy little rifle to have – either for a fun day on the range or for deer hunting. This rifle is equipped with a somewhat-standard 13 ¾” length of pull; although there is a compact version that is just over one inch less. In addition, the American series of rifles incorporate a rotary magazine design that, in the case of small case rifle rounds, holds five . . . The 300 Blackout cartridge has always appealed to me, though I’ve never ran out and bought one. Compact, good ballistics, the availability of brass, and other attributes make it a great cartridge. Over the past years, it has been well-received and increasingly popular with the AR folks. However, I’m not much of an AR shooter myself (gasp) and I’ve been waiting for a well priced bolt gun. The Remington 700 was a bit too heavy for my taste. I also liked the Remington 7 AAC but have seen varied accuracy reports. The Ruger American has made a great impact to the mass-produced rifle world and, with a street price of less than $400, I couldn’t pass on this one. Before going to the range, I cleaned the rifle ensured it functioned properly. I mounted a Nikon P-300 2-7×32 scope which uses Nikon’s proprietary SuperSub BDC reticle that ranges the drop out to 600 yards. This scope has great reviews and a street price of less than $200. In addition, it fits the rifle well, both in regards to looks and use. For what it’s worth, I installed the scope in Warne rings. I procured a variety of ammunition which included Barnes 110gr Tac-TX bullet, Nosler’s 125gr Ballistic Tip, and Remington’s 220gr sub ammo. From that point, I headed out to do some testing.

While I was moving the rifle around the range, I noticed there was a bit of discoloration on the left side of the barrel that was previously obscured by interior lighting. It took somewhat of a close look, but the finish was applied a bit thin in this area. Ruger did not use bluing on this rifle; instead, it appears to be a sprayed-on finish. Honestly, I’m not too concerned about this as long as the rifle shoots – but I know that many of you must maintain a pristine gun at all times, so this is of note. The ergonomics of the rifle are overall well designed and the stock has the appropriate amount of texture. The stock incorporates a unique bedding system that allows improved accuracy while reducing costs and lightening the weight. I am a bit upset that manufacturers still insist on using low combs for a rifle that requires the use of a scope. It prevents one from getting and maintaining a solid weld to the rifle when your head must nearly float around to see through the optic. 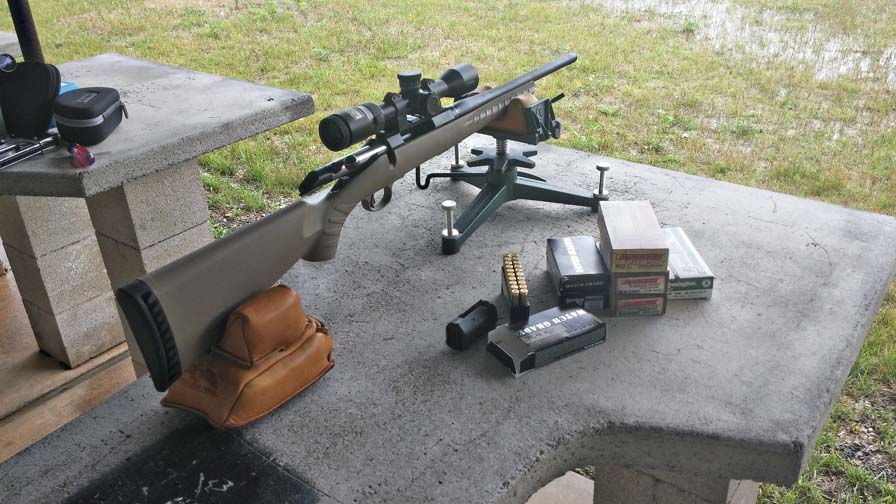 Seated at the bench, I dry fired the rifle a few times to get the feel of the trigger. It’s heavy for my taste – around 4 1/2 lbs – but it’s well suited for a rifle of this type. On the other hand, the trigger is adjustable (I believe it’s advertised range is 3 1/2 – 5 1/2 lbs) for those wishing to lighten it a bit. In addition, there are many reports – written by experts, of course – floating around the all-knowing interwebs instructing you how to cut coils off of the trigger spring to lighten the pull. I’m not going to discuss that here and it sounds like an awful idea for multiple reasons. If I decide the rifle requires a new trigger, Timney already has an excellent replacement on the market. After bore sighting the rifle and using a few rounds to adjust my zero, I started shooting for groups. I used TTAG’s standards – 3 round groups at 100 yards. I shot my first two rounds of  the Barnes 110gr – which were touching – followed by another around ½” away. That group was just over .600”. Needless to say, I was pleased. The second group was around the same. By the fifth set, the groups were opening up considerably. I must attribute this to the barrel temperature as, after I let the gun cool down a bit, the group sizes diminished. This trend continued and it’s not uncommon for a barrel with such a light profile. The Noslers had a best group of .650”. I ended up shooting a five-shot group for the sub ammo and it was just a hair under 1”. I’d say this rifle exceeds the $1k-1 MOA requirement by a large margin. I’m excited to start working up some handloads. Ergonomics * * * *
It fits me well, everything is within proper reach without hand manipulation. This would have been five stars if they included a higher comb.

Customization * * *
Aftermarket triggers are already available. You can screw a flash hider or suppressor on the end. Other than installing whichever optic you’d like, that’s about it.

Overall * * * *
This gun is very accurate. Very handy. Truly a great gun, especially considering the price point. I took it down a star for having a low comb in addition to the finish on the barrel being sub-par.