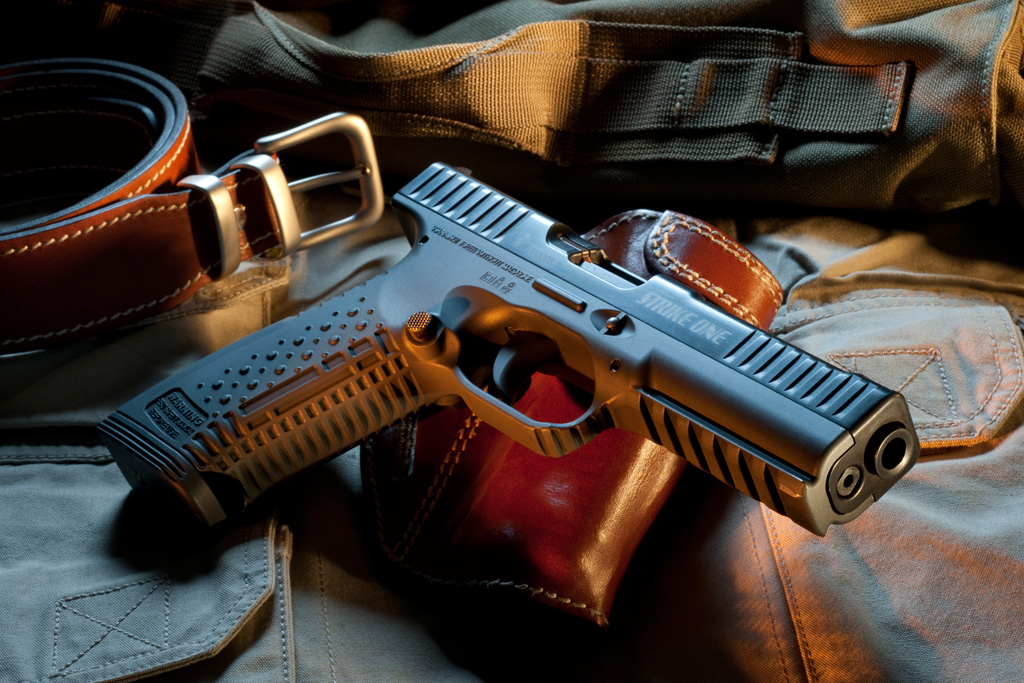 It took them more than a year and a half from order to delivery. That’s kind of a long wait for pretty much anything industrially made, particularly for a gun. Well, the wait is over. I finally got my brand new Arsenal Firearms Strike One, one of the first 200 produced, the first passing the Swiss border. And in the last week I have been shooting the hell out of it to see if it was worth the wait. But before the evaluation of the tool, a little about the gun itself . . . To dispel a few rumors, the gun is made and designed in Italy. All the guns marketed outside Russia and its satellites will be made in Italy — the company is multinational with facilities and shareholders in different countries. Several sources confirm that the Strike One will replace the venerable Makarov in the Russian arsenals for military and police applications. Apparently the Russian (or Strizh) model will be exactly the same but with a manual safety and will be locally produced. On a first look, the Strike One looks to be a common full-size polymer frame, striker-fired, 9mm pistol. It comes in a stylish case with two 17-round magazines (double-stack Mec-Gar) and a very handy cleaning kit. The frame is made of polymer reinforced with fiberglass, carbon fiber and elastomers mixed up in a property formula to maximize performance in the most adverse conditions. A quite long MIL-STD-1913 rail is there under the barrel and the pistol has a prominent beavertail to increase control and protect from “slide bite.” The slide and the most important metal components are machined from a solid billet of 42CrMo4 steel hardened at 44/46 on the Rockwell scale. The other metal parts are the result of a metal injection moulding or investment casting process. The single-piece chassis is embedded in the frame (not sure if it’s possible to remove it or if the frame is moulded on top of it) and includes two long, slim rails and all the lodgements for pins, springs trigger mechanism etc. Most of the metal parts have a 75 Hrc surface nitrite treatment or are chromed. The 5-inch barrel is made of 36NCD4 steel, is cold-hammer-forged and has six conventional 1:10 rifling. The magazine-release button is reversible. An additional button is provided with the gun in order to use the patented ambidextrous mag-release mechanism. It’s pretty easy to install without tools or gunsmith intervention. With the gun cocked, the firing pin protrudes from the tail cap and works as a visual and tactile indicator. The tail cap is one solid piece that includes the rear sight. This isn’t a good idea as it will make customization far more difficult and expensive. I doubt if this design adds anything in the way of structural strength.

With no external safety, prevention of unintended firing is handled by but automatic systems in the trigger and the firing pin. In particular the trigger safety engages if pressure on the top half of the trigger is applied. This differentiates the Strike One from its main competitors because the “second little trigger” in the middle of the main one is absent, not that I minded it on the other guns.

Overall quality is in at least as good as other handguns in the the price range. The Strike Once retails in Italy for 695 Euros — that’s about the same price of most of the plastic guns on the market. I understand that US MSRP is in the $799 neighborhood, putting it a little higher than its competitors.

Mine arrived in perfect condition except from a few scratches inside the magazine well. This isn’t a tragedy because there’s no way to see it without a detailed inspection of the inside of the gun and it doesn’t affect gun functionality or safety. Still, it’s the kind of thing that firearms enthusiasts don’t appreciate.

Overall, the general impression is that a great deal of attention was given to the sturdiness and strength of the pistol in order to pass the Russian military tests. All in all, the design seems to be a good blend of Italian craftsmanship and Russian pragmatism. Once disassembled, the gun reveals its true peculiarity: The locking system is a genial yet simple modification of the classical Browning short-recoil, tilting-barrel (modified Bergmann system) system. The barrel moves horizontally, without tilting, the locking block that drops to unlock the barrel after few millimeters of backward movement and then pushes it back in battery, sits before the cartridge chamber and not directly below it. The result is one of the lowest bore axes in the industry (12mm) with what should be an increase in accuracy, service life and reliability. The trigger is a very light single-action two-stage affair with a short reset. Another way to describe it is as a “dirty” single action — it’s a bit raspy. The two stages, the first one in which the trigger rotates and, I believe, disconnects the safety (a first click is audible) and the second one which engages the transfer bar and moves horizontally. This stops being an issue after the first couple of magazines, particularly in rapid fire.

What really astonished me is how light the trigger is. I experienced a similar one in my old Tanfoglio Stock customized for IPSC competition. I have no experience in the military or law enforcement, but the trigger maybe a bit too competition-oriented, especially considering the lack of any manual safety and the enormous space the trigger guard leaves in front of the blade. Yes, I know that guns don’t go off without human intervention and that a manual safety isn’t always popular. Just a consideration looking on what is currently in service around the world. Another thing I appreciated the first time I handle the gun was the trigger’s flat, large metal surface with grippy serration lines. I changed my mind after the first 200 rounds fired and I had a sore finger. Probably the wide trigger guard and the serrated trigger are engineered for military and police operators who use gloves or work in cold or extreme environments. Reliability has been very good. I shot 500 rounds of ammo with no malfunctions and an entire magazine fired with a very limp wrist. I shot it upside-down and horizontally, with the ejection port up and down and the gun always cycled correctly. I was only able to use FMJ because that’s all that’s available here. The Swiss follow the Geneva conventions — no surprise there. Field stripping the gun is easy enough, can be done without tools. The main takedown pin is captured. Full disassembly seems more complicated than steel- or aluminium-framed single/double-action guns, but I wouldn’t say that this is mandatory to guarantee the normal maintenance and cleaning of the gun.

The Strike One is both accurate and fast. More accurate and fast than I am. The factory sights with three white dots are OK and except for the fact that the rear sight is part of the tail cap, nothing good or bad to point out. The in-line barrel movement and the decrease number of moving masses as well increase control and accuracy.

In term of ergonomics, the designer (Nicola Bandini) did its homework. Controls are all within reach and spot-on in terms of dimensions. Lefties can install the provided ambidextrous magazine release. The Glock-like low-bore axis and beaver tail make the gun very controllable. The grip is grippy, but not too aggressive (probably not enough for competition shooters, though). The angle between bore and grip allows for instinctive aiming. The magazine well is oversized making magazine changes super fast.

What I was told by the company, during one of the many enquiry calls to investigate where my Arsenal Strike One was, was that the company is young and the product is new and I had to be patient, so patient I was … and I don’t regret it!

The gun is accurate and fast. More accurate and faster than I am. The three-dot factory sights are OK. The in-line barrel movement and the decreased number of moving parts means better control and accuracy.

Everything is right where it should be, easily within reach. The low-bore axis and natural grip angle make for accurate, instinctive shooting.

500 rounds without a hiccup. Again, due to local restrictions, I haven’t tried JHP. But so far, no problems to report.

No accessories or mods are available yet as far as I know. I was provided with the gun with a pretty basic holster. The rear-sight design doesn’t exactly lend itself to easy customization. I guess the availability of mods and accessories will depend on the Strike One’s success in the U.S. market.

It combines what’s great in the Browing design with the best of fixed-barrel guns, keeping the whole thing simple. What more do you want?

The Strike One is a very well-designed, comfortable-shooting reliable pistol. Period.