After a few years of unavailability in the U.S., Kahr Arms purchased Magnum Research and began reimporting the Baby Desert Eagle in 2011. This year, they’re extending the line with a downsized polymer gun that evokes the iconic big boy pistol famously chambered in . 50AE. With the new Baby Desert Eagle III, they’ve managed to tame the significant snap .40S&W in a gun that’s surprisingly fun to shoot.

In case you’re wondering, the Baby Desert Eagle III isn’t a scaled down version of the famous .50AE Desert Eagle. They may resemble each other, but the two pistols differ entirely in their function. 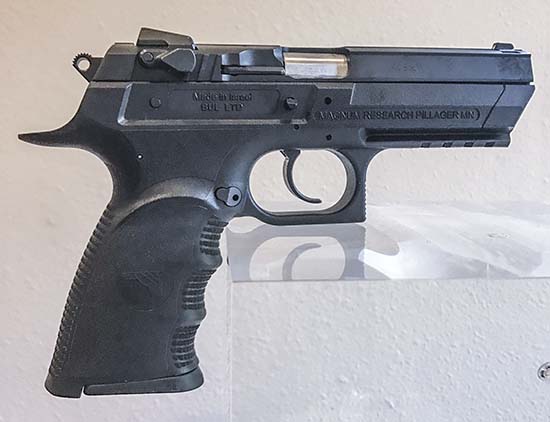 In terms of style, the polymer Baby Desert Eagle III is a bit of a chimera. The slide is large, steel, boxy…all angles and sharp lines. The top of the polymer frame follows those same lines, until you hit the grip, which is all swells and curves.  The mixed materials add to the bipolar effect.  But the lines flow into themselves and generally work. What also works is the slide to frame fit. The result is visually interesting, but more importantly, highly functional as it brings all of that mass closer to your hand. That reduces felt recoil and muzzle rise. Also deciving is the size of the gun. Just looking at it, I’d have thought it was larger and heavier than it is.  In fact, it’s a quarter of an inch shorter than, and 6oz less than the Beretta 92FS. A steel framed version is offered that is 9 oz heavier. The sight set up is pretty standard, 3 big white dots.  I would hope on a “tactical” minded pistols these would be fiber optic or Tritium for low light shooting, but that’s hard to get at this price point. I’m disappointed that the rear sight has a ramp front. I’d much prefer something like a Heine or other design with a grippy shelf that would allow me to cock the weapon one-handed against clothing, a boot, or my teeth (I’ve only had to do that once.) Although there’s space between the sights, its not so much that it has much of a negative effect on accuracy, and the gun has a lot of “pointability.” John Moses Browning’s influence really shows here. Although a now distant variation of the High Power, that same ability to go right up and point at the target is there with the Baby Desert Eagle. The grip is long, curved, and narrow, using a single stack magazine. Beyond just the shape, the front and back strap of the polymer framed grip are both heavily textured, with light finger groves molded in. There’s also an obvious and usefull shelf for your thumb that works well in single-handed fire as well as funneling your thumb to the magazine release. That release isn’t particularly obtrusive, but the layout of the grip works so well that my thumb went right to it when needed, and the two supplied factory magazines ejected with ease. Reloading a magazine was not particularly difficult, but the magwell isn’t funneled in any way, and in fact has several sharp edges to catch a magazine. Disciplined practice solves the problem, but if you were hurt, bloody, and stupid from blood loss and trauma, it might catch up to you.

To put it bluntly, that slide-mounted safety is an abomination. Massive, rough in movement, and located in entirely the wrong place. It begs to get caught on things. It’s like they were trying to out do the Beretta 92FS in otherwise ruining a good thing. And they succeeded. I tried clearing an induced stovepipe (and induced is the only way I could get them) by dropping the mag and racking the slide. Just like my old M9, if I did it fast without looking, I mistakenly reengaged the safety several times. Also like my old service pistol, I had to relearn to grip the slide forward of the ejection port to clear a malfunction, or just be willing to always press that safety forward every time, need it or not.

Those are your training options to get over what should be like the 92G. That is, this should be a decock only. That long double action first pull and a good holster is safety enough. This safety is also a decocker, returning the hammer to the full forward position. In single action, the  trigger is OK, but in double action it doesn’t even rise to that middling level. In single action mode, the trigger is still too long, and breaks within a millimeter of the frame at around 4 1/2 lbs with little grit and one felt click during the pull, if you’re moving it really slowly. The double action trigger is heavy — 12 to 13 pounds — with a sharp stack right a the end.

Old-school revolver shooters won’t have a problem here, because they’ll allow their finger to slide down the trigger, “stroking” it. You should definitely follow their example.  Failing to do so will result in a very sharp muzzle dip prior to that hammer falling. Of course, you then have the single action, where you won’t have to stroke it at all. I still struggle with that change on all my DA/SA guns, but the sharp stack of this model is a particular challenge.

As far as reliability, the Baby Desert Eagle is wonderfully, boringly perfect. I put 500 rounds of mixed ammunition through the Baby Deagle with no malfunctions of any kind. It sometimes looks as if it hasn’t fully locked back on an empty magazine, and there were a couple of times that fooled me. But it’s just the particular geometry of the gun. It performed flawlessly. Accuracy for this .40S&W varied significantly between loadings. Shot in five shot groups off of bags at 25 yards, my best groups were with the Federal 165gr FMJs at two inches, and the worst were the Federal HydraShock 180gr HP’s at three inches. Every other type of round fired landed somewhere in between those. Not bad at all and better than most service designed guns I’ve seen. The Baby Deagle’s is a fast gun. That doesn’t entirely surprise me, given the CZ 75 behind it. Even so, this gun doesn’t have the snappy muzzle rise so many complain about when shooting a fo-tay. Like the Beretta 92FS, the recoil is much more back and fourth than it is up and down, with little muzzle rise. It was easy to keep the front sight on target, and controlled pairs were a breeze with the gun.

The first two shots were very quick, and the singles in transition were surprisingly easy. I did a half-assed Bill Wilson 5X5 Skills Test with the Baby Deagle, drawing from my pocket and also doing five shots left-handed. I scored 35.27.  I only did the test twice, and that’s fast for me with a DA/SA gun I’m not used to and without a holster. On this gun, that first double action pull really slowed me down. After that, the rest of the string was brisk.

I did what has become an obligatory drill as well, which I have informally named “fall on your old broken ass, grab your gun and shoot everything you’ve got.” That’s not a bad drill for a review, because it gets the gun in the dirt and gets me shooting one-handed in an awkward position. There’s nothing spectacular about these sights, but they are bright enough and obvious enough to get a good picture, and that grip really is great even one handed. Held out at an odd angle, getting fast silhouette magazine dumps from the ground at 10 yards wasn’t much of a challenge.

It wasn’t until after I had finished shooting the Baby Desert Eagle that I looked up its MSRP…and was very pleasantly surprised. $646 is a good value for a .40S&W with all that this gun offers.

Style and Customization * * *
It’s at least interesting. Although there are no rough tool marks, there’s also nothing special about the finish. Serious points off for pretty much the entire right side of the gun being covered in lettering. There isn’t much customization to be done here. You can hang whatever you want off the particularly long accessory rail, and drift out and swap the sights. That’s about it.

Accuracy * * * *
Two- and three- inches isn’t bad at all, especially not at this price point.

Overall * * * *
I started this review with the notion that the Baby Deagle — especially in this caliber — was just a gimmick. Very much a why-does-this-even-exist gun. But I came away shooting a fast, fairly accurate, easy-to-handle .40S&W, and with a very different attitude. I don’t like the stacking on the DA trigger and I abhor that safety. But the Baby Desert Eagle III is otherwise a very worthy handgun.