There’s been a bit of a .45 Super resurgence of late. I carry a pistol every day for self defense, but I also hunt quite a bit, and very much enjoy hunting feral hogs. I’m always looking for a pistol that can serve both roles well enough, so the .45 Super piqued my interest.

First, a little on my take on the .45 Super. It’s a reloader’s round. Yes, there are companies that carry it, but ammo is expensive and you won’t see the big benefits of the round until you tailor it for your particular firearm.

I also don’t see the need for the .45 Super as a self-defense round. The .45 ACP does a fine job on its own. The increased energy and penetration of the .45 Super is nice, but the increased recoil and time it takes to get back on target during a defensive double tap is not. Where is shines is in a few specific realms of competition, and handgun hunting. 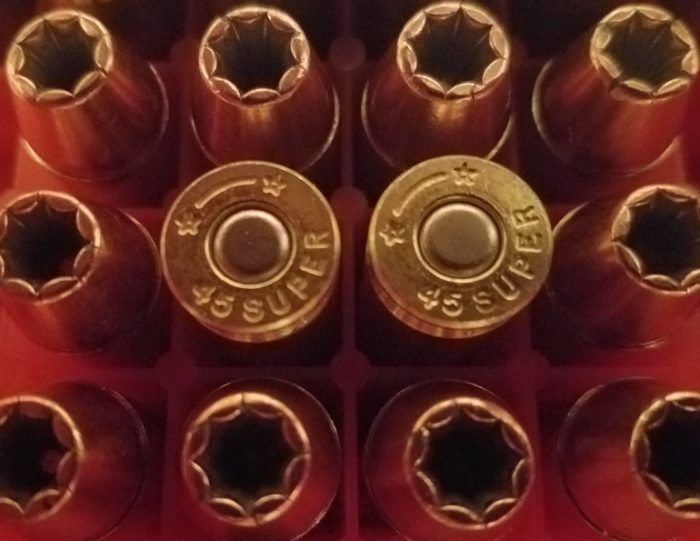 I was originally looking to build a 1911 to run .45 Super and I may still do that. But the GLOCK 21SF (with its 13-round magazine) I already had was just so easy to convert that I was willing to try it first.

Since most of my pig hunting is done at night with night-vision optics, I need a pistol that includes an accessory rail and I prefer it to be suppressed. Almost all of my shots on pigs are at night are taken from within 30 yards.

I’ve noticed a big difference in the animals’ behavior when using a suppressor. They don’t run as far, scatter as much, and half the time they run toward the gun, not away from it. Using a suppressor at night usually guarantees I get a couple of shots off on the running sounder instead of just one and done.

According to my shooting log, I have just fewer than 1,000 .45 Super rounds through my already used GLOCK 21SF. The results have been nothing but positive.

To convert my G21SF to run .45 Super, I bought an aftermarket barrel (Alpha Wolf  stainless-steel threaded barrel), a heavier recoil spring (24 pounds), and a tungsten guide rod, all from Lone Wolf Distributors (LWD). I originally went with a 23-pound recoil spring, but then found a heavier spring (24-pound) and went it with it instead. I can’t tell the difference.

The total cost of my conversion kit was about $200. Installation took less than 15 minutes and was 45 super simple. I’m shooting many of my rounds through an Advanced Armament Company .45 ACP suppressor. It needs a lot of regular cleaning and has a heck of a first-round pop, but has shown no signs of undo wear.

Many people run their .45 Super pistol with a compensator. This would definitely help reduce recoil, speed follow-up shots, and I imagine it would dramatically reduce the wear on the firearm for folks who intend to shoot .45 Super loads exclusively.

But the muzzle flash and sound of the comp directly contradict the use I intend for the pistol. I need it to be dark and quiet. Modified like I have, the empty cases most often land a couple of feet farther away than the stock pistol shooting full pressure 230gr .45 ACP rounds. That’s an indication that there’s some increased battering of my slide going on. If the empty cases landed 10 feet away, I’d call it a no-go, but I’m good with just a couple extra feet on a gun that only shoots the .45Super on occasion.

As long as I’m running a 230gr round, I’ve had no issues with reliability when shooting standard .45 ACP pressure loads in my modified G21SF. I’ve shot plenty of commercial 230gr FMJ target rounds moving at 795fps without issue. Lighter rounds, like the 185gr and 200gr bullets, often have failures to fully return to battery or won’t lock the slide back on an empty magazine. If I want to shoot rounds on the milder end of the .45 ACP spectrum or put my gun back to duty condition, switching back to the original barrel and factory recoil spring takes just a couple of minutes.

As far as the ammunition itself, I’ve used only my own hand loads with several projectile types. I’ve only used Winchester LP primers, Power Pistol powder, and Starline .45 Super brass. All of my rounds have received a heavy taper crimp and they have all been loaded to a 1.230 overall length.

Fortunately I’ve had a little success hunting with my converted 21SF. The first round I built for pigs was a duplication of a proven .45 Colt round. I loaded a 255gr hard cast LSWC bullet to barely over 1,000 fps. It proved to be extremely potent on the porcine pests. All of my shots were on fairly small pigs, none over 100 lbs, and all under 40 yards. With this round, I had 100% pass-throughs on pigs, at any angle. I hit a pig in the rump and it exited diagonally through its chest. That’ll do pig, that’ll do.

Although not a max pressure round, the recoil on that particular round is stout, and it has proven to be more than I need. In accuracy testing, the most accurate round for my gun is a 230gr HP pushed by 8.6gr of Power Pistol to barely subsonic speeds. That round shoots a 2″ average five-round groups at 25 yards off bags. This is about two-thirds the size of the better .45 ACP groups I shot through the G21SF when it was stock. Considering the accuracy of the round and the fact that it was still generating 500 ft-lbs of energy at 50 yards, I felt good about taking pigs with it at closer ranges. There’s also a bit less recoil than the 255gr rounds and it’s easier on the gun. This recipe has become the standard with my G21SF in .45 Super, and it’s what I’ve shot most through the gun. Although the pass-throughs aren’t as assured as with the heavy hard cast round, it has proven very capable on pigs at the ranges I usually encounter them at night.

I haven’t taken any animal at farther than 40 yards with this gun, but I’d be perfectly confident taking a hill country white tailed deer at 50 yards. Using that 255gr round would almost certainly result in a complete pass-through on the thin-skinned game, and it’s still generating about 550 ft-lbs of energy at that range. My G21SF experiment has been a success. The conversion was fast, easy, and fairly inexpensive. The gun ended up being more accurate and much more powerful than the stock gun before the changes. We’ll see how long it lasts, but I’ve liked it so much that the now-converted G21SF has taken the place of my S&W 29 in my truck’s console. High praise indeed.