I’ve said it before and I’ll say it again, nothing ruins a good gun like a bad trigger. Especially on the AR-15 platform, where everything is precision crafted and tuned for accuracy, even a little annoyance like an extra creepy trigger can throw off your game (and your shots). Thankfully there’s a thriving aftermarket for “improved” triggers, so you can find one that suits your needs. Today we’re talking about the X-Treme AR-15 trigger.

First things first, not all triggers are good for all things. Single stage triggers on the AR platform are generally used for “run and gun” setups, like 3-gun rifles and self defense guns. Two stage triggers are usually considered “precision” triggers and used in National Match rifles and long range setups. Not that you couldn’t do both with either, but one is better suited for the task at hand than the other.

This trigger is a two stage trigger specifically designed for the National Match Service Rifle division, and I’ll be doing my review in terms of the other National Match rifles I’ve handled. For a quick refresher take a look back at my review of the Armalite National Match M-15 A2 and my write-up of National Match shooting. That should give you a good frame of reference for what we’re discussing. 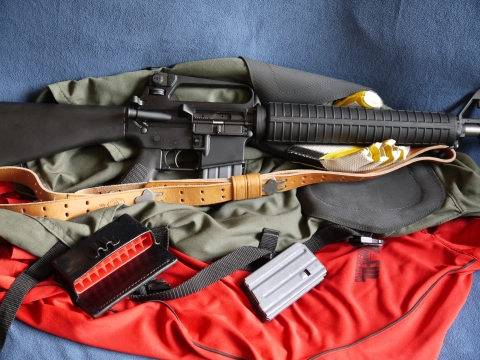 National Match competitions are all about precision shooting — breaking that shot off at just the right moment. No trigger does that better than a “good” two stage trigger. For exactly what makes a good trigger, go re-read my Ask Foghorn of the same name. It boils down to an easy first stage and a crisp break. The first stage is all about reducing the amount of additional force required to break the trigger, and a glass smooth break is essential to keep shooters from jerking off target. You don’t always get that kind of trigger pull on a stock trigger, so aftermarket triggers are plentiful and prevalent.

The first thing you notice after installing this trigger (it installs like a normal trigger, meaning it needs to be manhandled a bit) is that it’s smooth as silk. Not the pull itself, just the actual trigger blade. I’ve felt a lot of triggers in my time and this is the first one that has been polished to perfection. For comparison, the Rock River Arms and Armalite triggers both feel like they’re made out of fine sandpaper, and the Timney trigger has a smooth face but very abrupt edges. This trigger is smooth and round and plump, and it’s an absolute joy to rest your finger on. Seriously, I could go on about how smooth this thing feels forever.

It’s not just the blade that feels smooth — the pull itself is smooth as glass right out of the box. There’s no stacking or rough patches, just one long even pull to the break.

And that’s where things start to go a little downhill. But only a little.

Personally, I like a trigger that’s sharp and crisp when it comes to the break. The trigger should stop right at the break, and then the very next nanometer of movement should release the hammer. Unfortunately I have yet to find that ideal trigger, and what we’re left with are shades of gray. On both of the National Match rifles I own the creep is present and palpable, but the Armalite trigger is just slightly better.

On this trigger, while there is some slight movement, it’s not very noticeable on the range. In fact, it’s barely perceptible. It’s still there and slightly annoying, but less so than the other triggers I own. For those of you paying attention, I would rate the triggers I’ve played with in the following order of descending awesomeness:

Yes, I put a revolver first. Sacrilegious, I know. But it’s the truth. I still have dreams about that gun. So what’s the verdict?

Pull: * * * *
There’s a little bit of movement before the break. It’s not perfect, but it’s better than most of the triggers out there.

Overall Rating: * * * *
Not perfect, but close enough. A great two stage trigger that beats the pants of the stock triggers I’ve tried. I’m sure with some tuning this trigger could be amazing, but as with everything I review I try to stay as close to “factory” condition as possible.

Just a warning, I wouldn’t visit their website at work. There’s a picture of a, well, see for yourself when you get home.