After my time with the Ruger PC Charger I’ve become quite fond of the SB Tactical FS1913 folding brace. It comes in two configurations, a polymer model and an aluminum one and there are differences worth noting.

The FS1913 brace attaches to M1913 Picatinny rails. Big surprise, right? This brace was initially designed for use on SIG MPX and MCX pistols, but the M1913 rail as a brace attachment point on pistols (and as a stock attachment point for rifles) has moved well beyond the SIG weapons.

Braces are probably my top pick for firearm accessory of the century and their continued evolution has been fantastic to watch. The FS1913 brace is about the most minimalist brace out there that’s still useful.

Both braces are robust and well made. The polymer model is less expensive with an MSRP of $199. The aluminum models have an MSRP of $249. Both feature an identical, rubberized arm brace and stretchy, hook and loop-covered strap for attachment to your forearm. Besides the slight weight and length differences, the two braces felt nearly identical when used.

Tossed In and On

Both FS1913 braces have a metal attachment point that mounts perfectly on a length of 1913 rail. They are robust and attach with ease. Make sure you tighten it down well.

These are side-folding braces so recognize that our glorious overlords at the ATF have declared that any OAL measurement requires the brace to be in its smallest position when doing the measuring. This is important if you’re building your own.

The FS1913 brace folds to the left (it can be folded right by removing the hinge and re-installing it upside down) and holds itself folded via a pull-through detent. Meaning, to extend it you simply pull the rubber arm brace part away from the firearm to overcome the detent’s hold.

When deployed, a “tooth” on the brace-side half of the hinge falls into a notch on the gun-side half. They’re held together under spring pressure and lock relatively securely.

To unlock, pull up on the strut to lift that “tooth” out of the notch. It helps to place a thumb on the firearm in front of the hinge and then lift up on the FS1913’s strut with your other fingers. It’s a fast, intuitive, and rather smooth process. The hinge mechanism is made from steel for a long lifespan.

Currently, my only M1913 Picatinny rail-compatible firearm is the Ruger PC Charger, but I do own a Cobray M11/9 and 1913 adapters exist for it. [ED: scroll to the very bottom for photos of the FS1913 on lots of other firearms). On the PC Charger, the brace was almost perfect. The only downside involved the brace not locking folded when the PC Charger’s reversible charging handle was on the left side of the gun. With AR-type charging handles, or right-handed charging handles this won’t be an issue.

Keep in mind my sample size of one 9mm subgun isn’t a big one, but I ran into one issue with the FS1913 polymer model. When testing some of the SIG SAUER 124-grain +P M17 ammunition through the PC Charger the brace unlocked itself three times in 50 rounds. [ED: SB Tactical’s first run of hinges had a geometry issue that made them unlock too easily. This was quickly resolved and the FS1913 will no longer unlock under recoil unless the user applies excessive upwards pressure on it.]

It didn’t unlock with further M17 ammo, or with any other 9mm load. The FS1913A never unlocked [ED: all FS1913As employ the newer hinge design]. Again, these braces are designed for guns like the MPX that use a gas piston operation which results in less recoil than a blowback system so that could be the reason. There is always the possibility that I goofed up somewhere along the way.

Other than those two instances there were no other issues or differences between the two FS1913 models. If you try hard enough you’ll notice the weight difference, but the slightly longer length of the polymer FS1913 brace is a bit more noticeable. I have long arms and the little bit of extra length is nice.

The brace portion of both models is rather small for my above-average sized forearms. It was a little tricky to slip them over my forearm and latch down without something to set the gun down on. This micro-sized brace is trickier than the original SB15 brace and a range table helps quite a bit in getting the brace mounted on your forearm.

I found the strap to be incredibly comfortable. It’s soft and stretchy enough to prevent it from digging into your forearm. It adds a good degree of stability and makes using a red dot on such oversized pistols possible and more practical.

If you choose to use the brace as a cheek weld, you’ll find that it really is not a shoulder stock. It doesn’t provide as much structure on which to rest your cheek. You get some, but it’s relatively skinny.

If you want to misuse your SB Tactical brace and shoulder it (gasp!) as you’re legally allowed, you may find it a little narrower than an actual shoulder stock typically is. In fact, if you’ve used the much wider SBA3 a lot you’ll notice the difference.

That being said, the FS1913 is still very supportive and comfortable when shouldered and allows you to handle a pistol with much greater ease. Especially when it comes to light recoiling weapons like the PC Charger.

Ergonomics  * * * *
This is an excellent tool. The length is good and the strap is comfortable, but it’s a little tough to get on without the use of a table. If you shoulder it you’ll find a cheek weld is skinnier than what you’d expect from a shoulder stock, but it’s still supportive, solid, and comfortable.

Reliability  * * * (FS1913) * * * * * (FS1913A)
The polymer model collapsed three times in several hundred rounds of testing with the PC Charger when using +P ammunition. I continued to use the same +P ammo and ran into no other issues. The aluminum model has never collapsed while firing with the same gun and the same ammo. [ED: this issue in the original hinge design was resolved by SB Tactical within a few months of the FS1913’s initial release, and unlocking while firing doesn’t occur on newer units]

Overall  * * * *
The FS1913 and FS1913A folding braces are a low profile option for those with rear M1913 Picatinny rail-equipped pistols. It folds, it’s lightweight, and it’s stable every way you use it.

I’ve been shooting with the FS1913 and FS1913A extensively over the last year with calibers including .22 LR, 5.56, 300 BLK, 6.5 Creedmoor, .308, .458 SOCOM, 375 Raptor, and more. For the most part this has been on Black Collar Arms Pork Sword Pistols, where we find the FS1913s to be the best pistol braces available for these compact, bolt-action pistol builds. We love their light weight, how incredibly compact they become when folded, and their nice cheek weld.

Here are some photos of different guns I’ve had an FS1913 or FS1913A on over the last few months (and took a photo of): 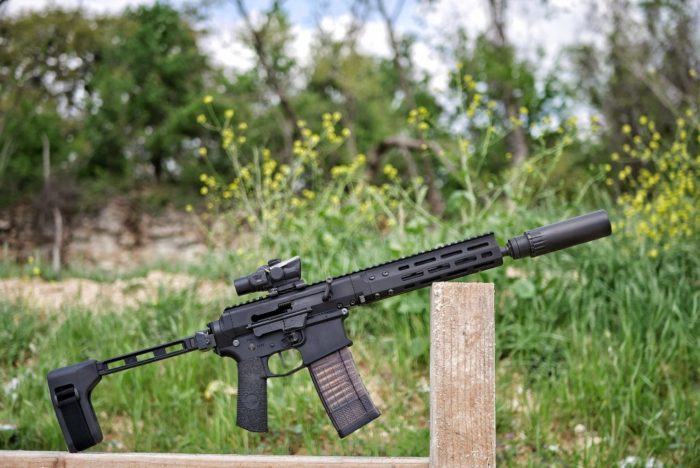 One of the great things about the FS1913A (seen immediately above and below) is that it can be Cerakoted: