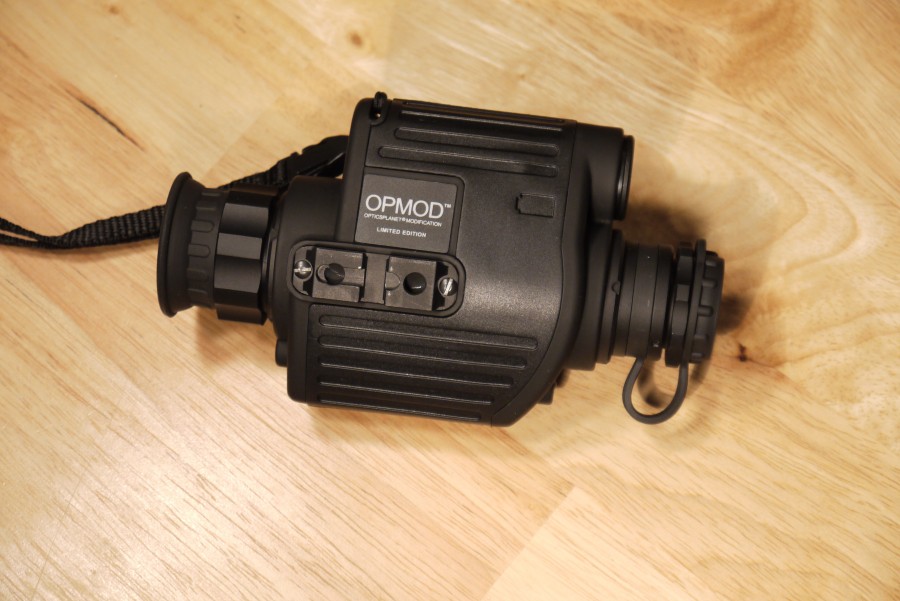 Hunting in the daylight is relatively easy, but when the sun goes away the game changes. There are plenty of flashlights out there that will light up the night, but when you’re trying to unobtrusively find your way to the hunting blind or stalk some wild porkers, light isn’t your friend. You want to be able to see even without much available light, and for that you’re gunna need a night vision optic of some sort. Optics Planet’s OPMOD skunkworks offers an entry level night vision monocular that’s perfect for those looking for more stealth on a budget . . .

OPMOD’s Gen 1M night vision monocular is a re-branded Armasight unit with a few extra bells and whistles. But that’s a good thing because Armasight is a well-respected name in the night vision business. Their products that I’ve handled in the past seemed well put together and functional, and the OPMOD monocular is no exception.

Right out of the box, the fit and finish on this device was excellent. The lens cap fit perfectly into place, the battery compartment cover screwed in tightly and without complaint, and the sole control button on the device was easy to use. Overall, I found it to be an easy-to-use design that fits my hand extremely well. The rear of the device has, as I mentioned, the sole control button on the entire unit. There’s a focus ring on the eyepiece to let you set the proper focus, but there’s only one button that controls the electronics. Click the button once and a green light starts shining on the back of the unit to let you know that it’s working, click it once mroe and it turns red to let you know that the forward facing infrared beam is on. That’s all there is to it, no fancy control pads or other techy stuff. Pretty simple and straightforward. Over on the business end we can see the objective lens and the IR light. There’s a rubber cap that is on a lanyard which covers the objective lens when not in use, mostly to preserve the delicate innards from the harmful light. Night vision devices work by using intensifier tubes, which multiply the number of photons coming through the objective lens and eventually produce the green image you see at the rear. During low light conditions you want as much light coming in as possible, but during the day too much light might damage the intensifier tube. If you do have the urge to use your NOD (Night Observation Device) in the daylight there’s a handy pinhole in the cover that lets in just enough light to not damage anything, provided you keep the usage to only a couple of minutes.

Off to the right is the battery compartment, and the only real gripe I have about this device’s construction. It’s a little tricky to figure out which way the CR123A battery should be placed in the compartment, and I wasn’t able to quickly find any markings that would help me alleviate the confusion. I had to resort to using the instruction manual, which is something I hate doing more than working the pits during a high power competition.

The monocular comes in a pouch with a head mount thinger that lets you wear the monocular hands-free while you’re walking around, and the built-in tripod mount lets you put it damn near anywhere that standard mount can be affixed. I’m pretty sure there’s even a way to get this thing mounted on your rifle to be used as a rifle sight.

So, the thing seems to be well built and comes with some nifty bells and whistles. But the real test is how well it works at night, and it’s about as good as you can expect from a Gen 1 device. Objects nearby are pretty well defined, but anything over 50 yards is a blob. 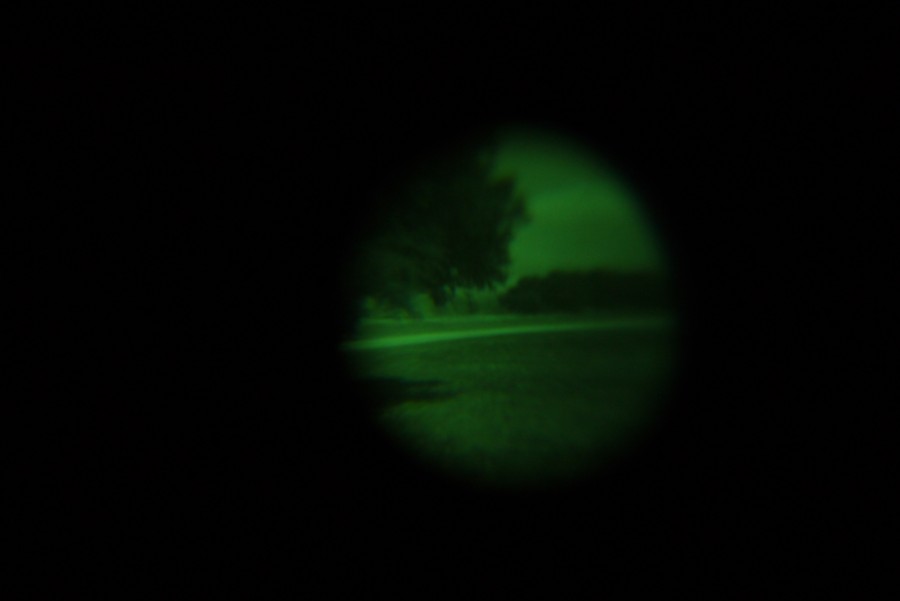 There are different generations of night vision devices, which correspond to different levels of technology. The Gen 1 devices are roughly 1960’s era tech, and as a result don’t have the same kind of resolution or quality of the modern stuff. However, that doesn’t mean that they’re useless. I wouldn’t recommend using this NOD for long distance hunting, but if all you need is something to get you to your stand in the dark of night this would be perfect. Also, if you’re working at 50 yards or less and have some supplemental illumination on your gun (like an IR flashlight) this would be quite sufficient. Especially considering that the next rung up the ladder in night vision usually breaks the $1,000 mark.

Overall, I’m very impressed with this product. For the money, it’s one of the best Gen 1 monoculars on the market. ATN has some products in the same price range, but the head mount and the accessories seal the deal. If you’re looking for something to let you get out into the darkness for the first time, this is a good beginner’s night vision monocular.

Overall Rating: * * * *
I would have liked to see a clearer marking on the battery compartment, and the IR beam could be a little stronger. But overall, an excellent product for the price.