Lone Wolf has been the #1 name in aftermarket GLOCK accessories, at least based on sales volume, for many years. While they’ve earned a solid reputation for decent quality at extremely competitive prices, they’re now looking to capture another segment of the market; buyers wanting even higher quality parts that are made in the United States. First up in what will be a growing roster of made-in-the-US products is the Alpha Wolf barrel series available in stock length, threaded, and conversion caliber flavors. One of GLOCK’s MOS pistols would seem to be an obvious candidate for hosting a suppressor, but GLOCK doesn’t make threaded barrels available a la carte. And the few factory pistols that came with a threaded barrel used metric thread patterns that we don’t see much of in the US. If you want to suppress your GLOCK — and why wouldn’t you? — you’ll have to turn to the aftermarket. For me, this meant an Alpha Wolf M/19 for my G19 MOS. 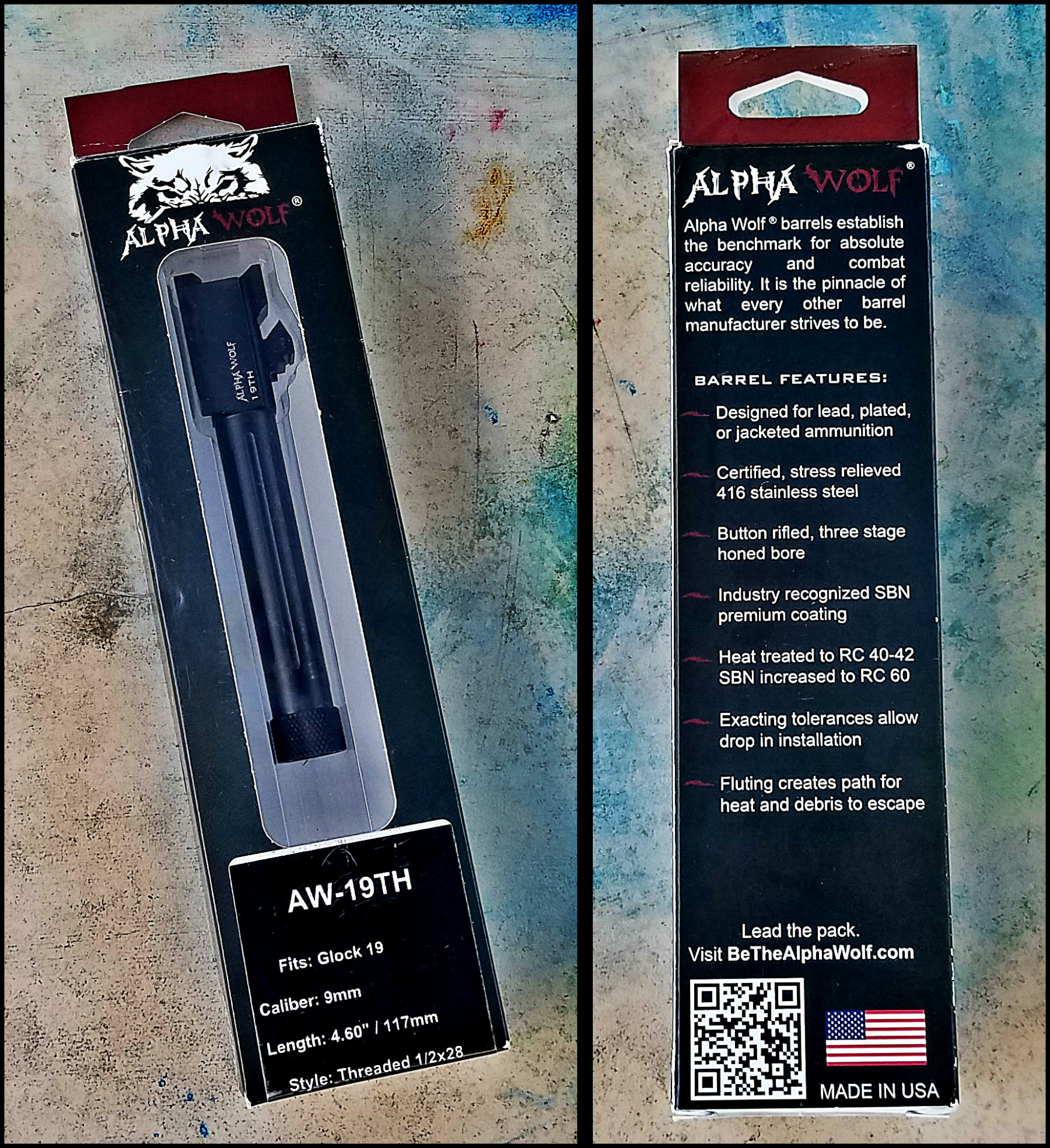 These new barrels come in new, retail-friendly packaging. While I don’t care about the ability to hang one up on a peg like a gun shop would, it’s still cool to get it in a box with the stand-out features listed on the back rather than in a plain plastic tool tube (like a carbide bit is usually packaged) as LW’s previous barrels were shipped. In case that’s hard to read in the photo, the Alpha Wolf barrels — threaded or not — bring the following to the table: That last point — traditional rifling — allows the use of lead ammo (as in non-plated, non-jacketed, bare lead projectiles) without fear of kaboom-inducing lead buildup as can happy in the factory, polygonal rifled barrels. This is the primary reason I purchased a 6.6″ Lone Wolf barrel for my GLOCK 20SF; I wanted to run Underwood’s 220 grain hard cast lead ammo as my “woods load.”

Logo and model number live on the left side of the barrel hood, meaning they’re hidden when the barrel is installed. There are no real standout differences in barrel hood, feed ramp, or chamber as compared to the factory barrel. Corners and edges are sharper/crisper, finish is smoother, and the chamber is ever so slightly tighter. It’s still a self-defense sort of chamber rather than a match-tight chamber, but it’s a skosh tighter. So is the barrel’s fit in the slide. It’s smooth and doesn’t hang up, but it’s tighter and leaves less wiggle room. The threading job is clean and precise and the barrel shoulder is generous and, as near as I can measure, totally square. The photo above shows a tiny divot on one of the thread edges, and at this point I have no idea if it came like that or happened during the last seven months that I’ve been using this barrel. With or without my Liberty Mystic X on the end, it has run reliably. I’ve shot eight brands of ammo through it at this point, including 115 and 147 grain reloads, and haven’t had a stoppage.

All of the ammo — from lightweight +P fodder to the particularly slow, 147 grain reloads — grouped approximately the same. Which is to say…

From a rest, about the same accuracy as I can squeeze out of a factory GLOCK barrel: I marked the point of aim (the JPoint red dot is zeroed for the factory barrel at 25 yards with 147 grain standard pressure Federal HST) with a blue dot on all of those photos, because… It shifted down about 7″ as well as a few inches left with the suppressor attached. This will certainly vary based on suppressor choice, ammo, and shooting distance. The Mystic X may be one of the quietest 9mm suppressors on the market and overbuilt to handle 5.56 and other calibers, but it’s no lightweight.

Unlike on a rifle, I don’t believe this POI shift is due to the barrel flexing. In this case, I think it’s due to the nature of a drop-in pistol barrel that must necessarily leave a certain amount of clearance so it fits in every factory G19 slide. While it’s a slightly tighter fit than the factory barrel, it still doesn’t lock up at the muzzle or barrel hood like a hand-fitted barrel would, and I think the weight of my Mystic maxes out its wiggle room.

At an MSRP of $159.95, the threaded Alpha Wolf barrels run about $70 less than most of the competition, but are $55 more than LW’s overseas-made offerings. I’ve had good success with those as well, but appreciate the nicer aesthetics, upgraded finish, and US-made aspects of the Alpha Wolf line and am willing to pay a few extra bucks for that. Price aside, the barrel has been working flawlessly for me. It fits perfectly, shoots straight, locks my suppressor in place nicely with its square shoulder, and after seven months, the finish still looks great. Although the Alpha Wolf barrel series is relatively new, they’re already available for most GLOCK models and possible caliber conversions, both threaded and not. There’s even a 9×18 Makarov conversion barrel for the G42.

Fit, Finish, Build Quality  * * * *
It’s as perfect as a “combat reliable” barrel could hope to be, but I’m giving it four stars because there are shops out there making match-grade GLOCK barrels that are works of art. There are no flaws on the LW piece, but they keep it simple as well as functional with drop-in, self-defense-reliable clearances.

Value  * * * * *
I think the only way to get a new, threaded barrel for a GLOCK for less is to go with Lone Wolf’s foreign-made models or with something that’s both foreign-made and noticeably inferior in quality. The Alpha Wolf is well made, it works, and it’s priced more than competitively.

Accuracy  * * * *
So far it’s about the same as a factory barrel for me, but I’m adding an extra star because it shoots cast lead ammo accurately, too. Even if the barrel is manufactured more precisely than a factory one — which I believe it to be — it’s still going in a GLOCK and it has to leave large enough clearances to work within GLOCK’s tolerances as a straight drop-in affair.

Overall  * * * *
There’s no shortage of options for aftermarket GLOCK threaded barrels, but most of that market has seized on the opportunity to aggressively gussy up the aesthetics of Gaston’s finest while charging a premium for the fancy machining and finishes. If your concern is more of the functional variety, Lone Wolf’s Alpha Wolf barrels will treat you right. They’re well made (in America), they shoot straight, they’re backed by a solid warranty. They’re also available in any color and finish you want as long as it’s salt bath nitrided black.