Leupold’s latest entry into the 1X sight field is the Freedom Red Dot Sight (RDS). It’s a crowded field filled with popular names like Trijicon, Aimpoint, SIG SAUER and Vortex, but the new RDS has much to recommend it — not least of which is the fact that unlike almost all of its competitors, the 1x34mm Freedom RDS and RDS BDC are designed and built in the US.

The tube-style 1X sight features a 1 MOA red dot and is offered in two models. The standard RDS model has screw-capped turrets with 1/4 MOA adjustments. The RDS BDC model which we tested has an open bullet drop compensator turret on top allowing quick, easy adjustment for various shooting at distances. The 34mm Freedom RDS ships in a beefy mount that will affix to your Picatinny rail via three Torx screws (small wrench included). If you decide you’d rather use another kind of mount — say one with a quick release — there are lots of options out there. 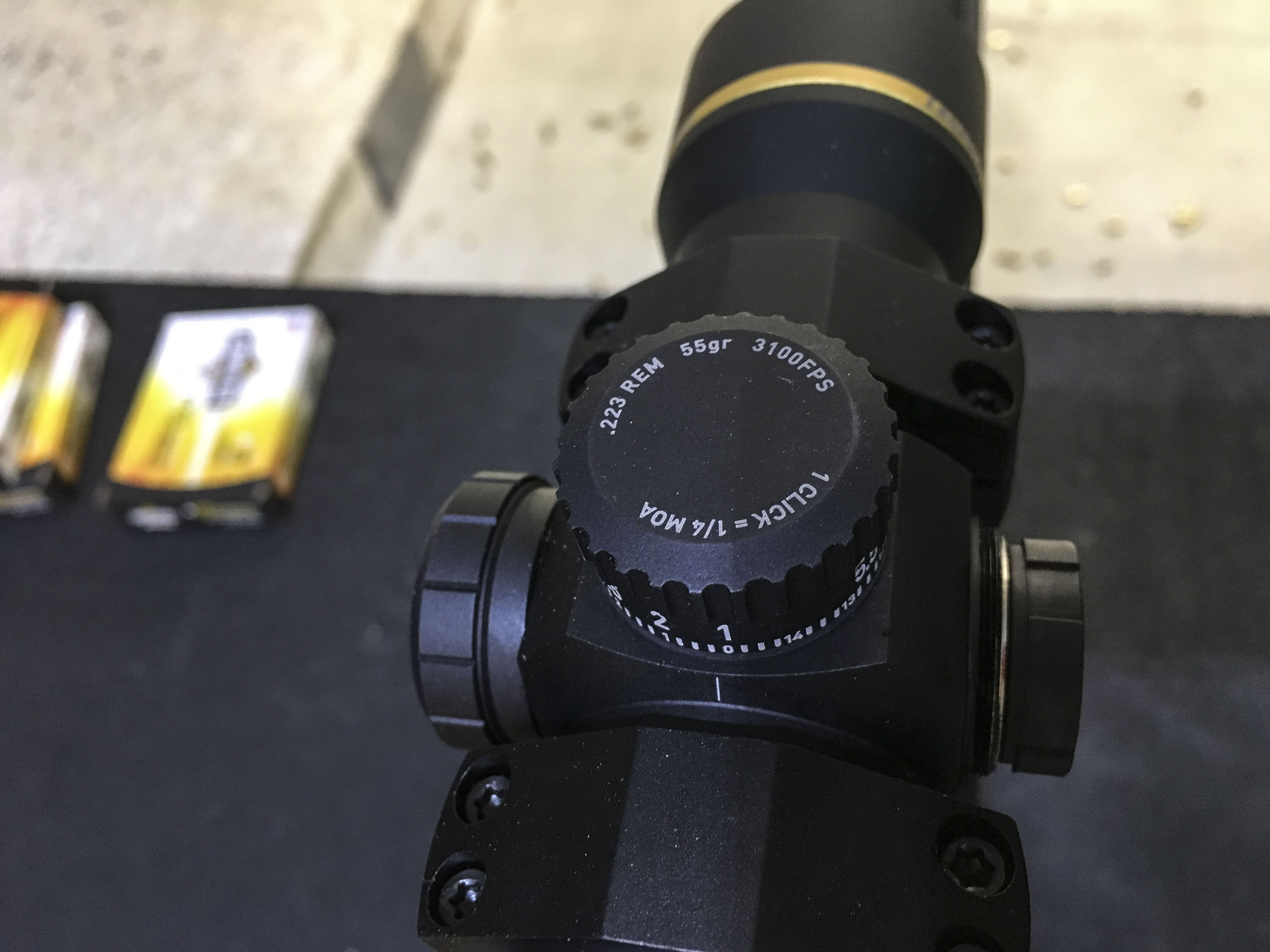 The Freedom RDS BDC is calibrated for standard 55 grain .223 ammunition. Once you’ve zero’d your rifle, shooting at ranges out as far as 500 yards is easy.

If you’re shooting at, say, 400 yard, just turn the dial to four, put the red dot on your target and go. No holdover necessary. The turret’s quarter MOA adjustment clicks mean more precise adjustments are easy.

If you’ll be using your Freedom Red Dot Sight on an AR chambered in another round — 6.5CM, 300BLK, whatever — Leupold will sell you a new dial calibrated for that round ($80). Both models feature an 80 MOA adjustment range in 1/4 MOA clicks for both windage and elevation and can be adjusted without the need for tools. Though it’s hard to see in the photos, the 1 MOA red dot is clear and distinct without undue flare, even at higher brightness levels.

The American-made Freedom Red Dot Sight uses what Leupold calls their Twilight Red Dot system which is intended to give you better clarity and color rendition in low light. We took the sight out at dawn and at dusk and had no problem distinguishing targets.

Also note in the images that the Freedom RDS’s optics are color-neutral. There’s no red or green cast to what you see through the tube. So if you shoot with both eyes open as many red dot users do, one eye won’t be viewing your target with a weird “stereo” or 3D glasses type effect. The Freedom Red Dot Sight has Leupold’s Motion Sensor Technology. Basically, if you leave it alone for five minutes, it automatically switches the unit off.

Move it or pick it up and the red dot pops back on to its previous brightness level setting for instant use. That will extend your battery’s life (which Leupold rates at 1000 hours on a single CR2032 battery).

Leupold also puts their Freedom Red Dot Sights though their “punisher” testing, something we saw in a recent tour of the company’s Oregon factory. This is the highest level of impact and endurance testing they apply to their high-end scopes for commercial and military customers. On/off and red dot brightness are adjusted via a button on the side of the sight that doubles as the Leupold logo.

There are seven different brightness levels available, from very low to very high. Adjustment involves simply pressing the logo button. The brightness increases through the levels until it gets to the maximum and lets you know it’s maxed out by blinking.

Continuing to press the button will then decrease the red dot’s brightness. Again, it lets you know when you’re at the minimum by blinking.

Leupold says the Freedom Red Dot Sight is night vision compatible, but we haven’t tested it under those conditions.

Using the BDC model’s dial really does simplify range adjustment. Simply judge your distance to target and dial it in. The ability to then put the red dot on your target makes hitting what you’re shooting at much easier.

The Luepold Freedom Red Dot Sight gives most shooters everything they need in a red dot…an easily adjustable, ruggedly built sight that will hold up to anything the typical hunter or recreational shooter will do with it. It doesn’t have quite the battery life of some (more expensive) competitors and it may weigh an ounce or two more. Wether the BDC dial option is worth an added Benjamin will be up to the individual user, but it’s a nice option to have.

In the end, the fact that an American-made red dot (there are very few out there) of this quality is made and priced within reach of the average gun owner is a big win.

Optics: * * * * *
Excellent. The amount of light transmitted through the Freedom RDS’s 22mm objective lens is exceptional and clear, with no tinting. Performance in low light was very good.

Build Quality: * * * *
The Leupold Freedom Red Dot Sight is built like a tank. It’s extremely sold, and, having passed Leupold’s punisher test, should give you years of service. It may be a little on the heavy side, depending on your use.

Adjustment: * * * *
The Bullet Drop Compensator turret model we tested makes dialing in your distance to target a breeze. If you shoot a round other than 55 grain .223, you’ll need another dial calibrated for your bullet. The extra $100 retail for the BDC reticle won’t be worth it to every shooter, but it’s something we really appreciated.

Overall: * * * * 1/2
The Leupold Freedom Red Dot Sight is a lot of red dot for the money. Its solid build quality and the included mount make it an excellent plug-and-play option for those who don’t want to spend $500 or more on a rugged, reliable red dot. Some will say it’s heavy and others will quibble about its battery life, but for most shooters, the Freedom RDS — in either configuration — is all the red dot sight they’ll ever need or want.