There’s always been something about the SCAR rifle series that bothered me. The gun is great — accurate as all hell, runs like a Swiss clock, and easy to use. But the aesthetics of the gun leave something to be desired. Something about the gun always seemed…off. Then I installed the MREX MLOK handguard from Kinetic Development Group, and it was as if the clouds parted and angels had begun to sing. The SCAR had been ‘fixed’ . . .

The SCAR has seemed like something of a chunky monkey. The rail sections on the sides and bottom of the rifle are great, but it makes the gun awkward to hold and visually unappealing. A least to me. FN offers a rail extension kit that gives you some extra railage out past the gas block and improves the ratio a bit, but the gun is still kind of a beast and not for those with smaller hands. What it really needed was a slim and sleek rail extension that would give the shooter more room to grip the gun and also chop out the rail sections (except those that were really needed). Enter Kinetic Development Group.

I had originally contacted the KDG guys to try out their new stock (review pending), and their enthusiastic response was “we’ll just send you everything!” Little did I know they meant one of everything they make, including a MREX rail.

That posed a little problem, though. My SCAR has a barrel that’s too short to take advantage of the rail they sent. I needed a SCAR with a 16″ barrel, and I knew just the schlub for the job. So I packed up some tools (and a few cigars) and headed to RF’s garage to pimp his SCAR. There’s a little note on the rail when you open it up stating that you should watch an online video before installing it. I promptly ignored that, and it took me the better part of a Cuban robusto to figure everything out. In the end, the rail requires you to remove the existing rail sections from the sides and bottom of your gun, and momentarily un-install your barrel as well to get everything to fit right.

Having tinkered with SCARs before, I was very familiar with the platform and it wasn’t much of an issue, but less technically inclined buyers beware. And watch that video.

When it was finally installed on the rifle, the gun just looks right. At long last the proportions are correct, and the rifle actually looks sleek and sexy. Not at all the blocky and awkward-looking gun that left FN’s factory, it has graduated from frumpy to fabulous. The MREX rail system comes in two flavors: a 6.5 inch version for 16 inch SCARs, and a 4.9 inch version for 13″ SBR’ed SCAR 17s. Both versions replace the existing rail sections on the sides of the gun as well as along the bottom of the barrel assembly, the main difference is how much additional space they add to the front of the gun. There are two versions of each rail (besides just different colors, available in black and FDE), one using Magpul’s new MLOK system and the other using a screw-in rail section system of some sort. we were sent the MLOK variety in FDE to test out in this case. 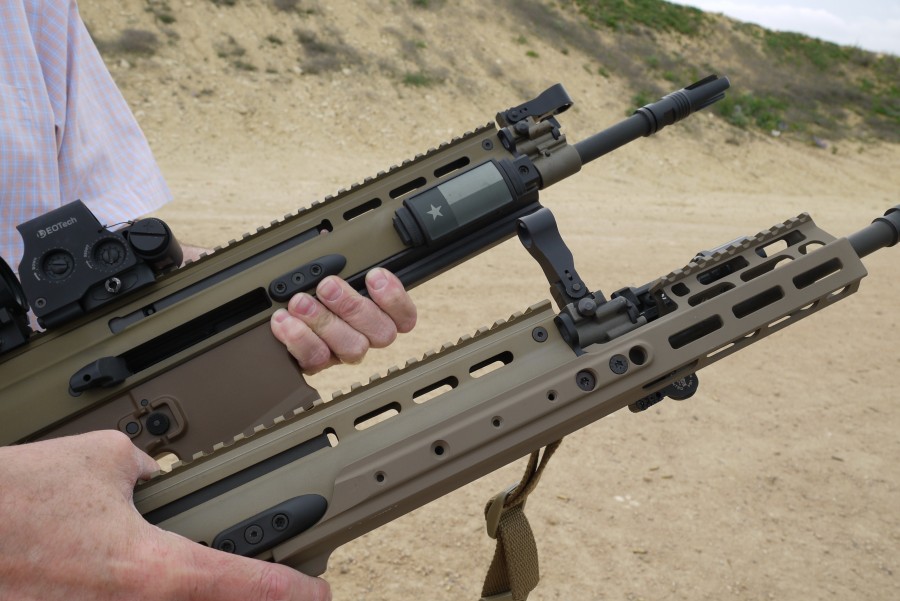 Compared to a relatively unmodified SCAR 17, the difference is pretty obvious. There’s a good 1/4 inch to 1/2 inch of material gone from the bottom and sides of the gun, making it easier to hold and slimmer in appearance. There’s a new QD hole out front too, in addition to the existing sling loops on either side of the gas block, for your sling attachment enjoyment. A ton more rail space exists further out beyond the receiver than ever before, and as an added bonus the gas block is enclosed within the aluminum chassis to keep you from burning yourself.

Ask me about why that’s important. I do, however, have a small issue with the thing: the forward rail section isn’t coincident with the rest of the rail space on the receiver. There’s a distinct dip in the height of the rail, and while that does make the rail slimmer and sleeker it can pose a problem for those who want to mount stuff out there.

I’m of two minds about this specific feature. On the one hand, it makes the rail slim and I like that. But on the other hand it makes the rails uneven, and I like everything to line up. It’s a style choice, and in the long run I think I can live with it, but it’s definitely something to be aware of when choosing the right rail for your SCAR.

Another issue some might run into is the color. No two SCARs are ever the same color really, and that’s all got to do with how long the receivers are in the anodizing tank. Heck, two receivers from the same batch might not be the exact same shade of brown (or FDE or whatever). So just be aware that the FDE on this rail might not exactly match the color on your SCAR. In this case, however, Robert got very lucky. Something I thought I would hate is the choice to go with MLOK. Everything I own and actually use is currently running the competing keymod system for accessories and attachment rails. I like it better mainly due to the ease of use and ready availability of accessories.

Magpul wants their MLOK system to be the new hotness in accessory rails, and initially I thought it was pretty dumb. I tried it for the first time in the field with this rail, and in my opinion… I still like keymod. But MLOK isn’t as bad as I thought it would be. It definitely gives the extension a better and sleeker look than the odd shaped keymod holes, but putting things on and taking them off can be a pain in the ass. They need to make it a little easier to use, I think.

But I digress. Back on topic. I like it. A lot. The SCAR was designed with specific requirements in mind, and while it meets those military requirements, that doesn’t always translate into something that the civilian market will find useful. The MREX rail takes that clunky military firearm and adds some style and usability to it for the civilian world, and does it very well.

There’s nothing destructive done to the gun, and you can do it without even reading the instructions in about half a cigar. Robert likes it so much that he’s keeping it on his gun. I like it so much that I’m buying another one for my SCAR, but a little shorter this time.

The MREX rail combined with a different stock on the SCAR completely changes the nature of the beast. It makes the gun slick and beautiful instead of chunky and utilitarian. And I like that.

Fit and Finish: * * * * *
The rail locks up perfectly on the rifle, with very tight clearances on the receiver parts. The finish is satin smooth.

Ease of Installation: * * * *
Grab a cigar and a laptop, you’ll be fine. Not quite as easy as changing an optic out, but WAY better than adding a rail to an AR-15 M4gery.

Overall: * * * * *
It’s right in the same price range as all the other available SCAR rails, but it’s the only one that actually looks good. Functional and pretty, it’s definitely a keeper.