Some gun enthusiasts consider firearms-related products aimed at women buyers nothing more than pandering. Sometimes it’s true (even if it’s unimportant). Sometimes it isn’t; the product offers females a genuine advantage over “standard” products designed for men. Is the Crossbreed IWB Women’s Appendix Carry Holster — hereafter known as the WACH — the former or the latter? According to CrossBreed’s website, “with its softer leather and smoother corners, the Women’s Appendix Holster was designed specifically with the female body in mind.” True story? . . . CrossBreed sent me a right-handed black WACH with zero cant (as is their wont) for my Ruger LCP. It’s a combination of leather and hardened molded plastic with a simple belt clip. Not to gender bend, but the Women’s Appendix Carry Holster is a handsome holster. The company’s embossed logo is a nice touch that highlights the quality baked into their $59.95 product. Weighing-in at 2.8 ounces, the WACH isn’t a bulky belt dweller — which is to be expected for a holster designed to accommodate Ruger’s “mouse gun.” 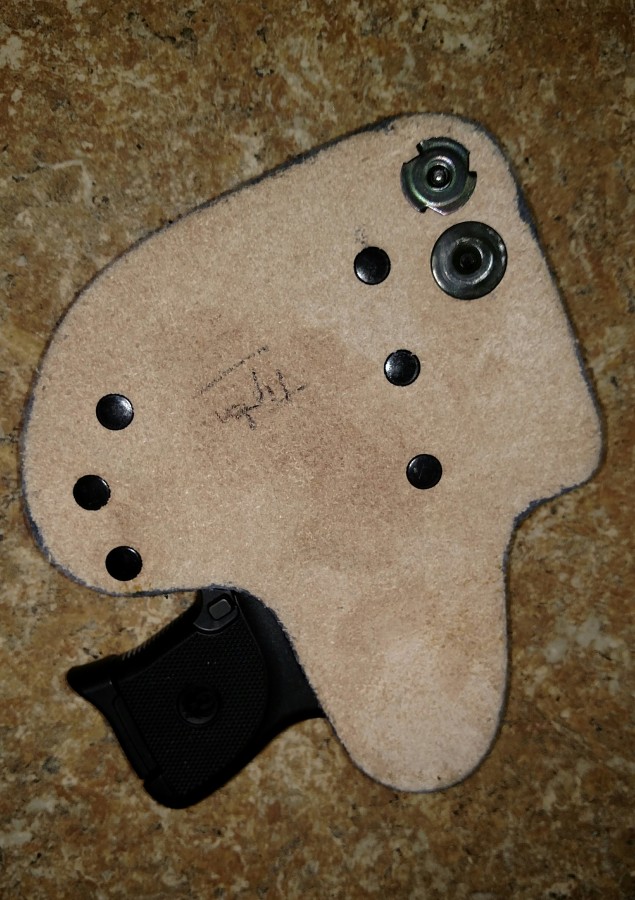 I was genuinely surprised by the leather’s feel. As advertised, it felt smoother than your average holster and, dare I say it, sexy against my skin. Equally important, and unlike several other holsters in my burgeoning collection, the WACH’s screws and rivets are virtually flush with the leather. No cold metal against my skin. The holster’s “smoother” (“de-horned”?) corners made positioning the CrossBreed WACH a relatively painless process. Although it’s not adjustable, the WACH’s retention is Goldilocks good. It isn’t too snug to prevent an efficient draw and it isn’t so loose that I worry about it falling out when I run or do a handstand (for the kids).

As the WACH is an IWB (inside the waistband) holster and the LCP (Little Compact Pistol) isn’t a large gun, I could get away with wearing a snug-fitting shirt while hiding the gun. As long as you’re wearing an outfit with a belt, the WACH works as advertised. Saying that, the CrossBreed appendix carry holster’s natural home is a pair of jeans. Less rigid pants may not cave under the weight of the gun and holster, but they may require a proper gun belt cinched tight — a solution that’s not particularly stylish or comfortable.

While women can position the WACH on their lower back, I consider back carry more than slightly dangerous (in terms of the potential damage to your spine if you fall backwards), uncomfortable and inefficient for presentation — especially while driving. Speaking of which . . .

In the appendix carry position, the WACH is not a women driver’s best friend. It rests under the lap belt part of the seat-belt. The taller back bit pressed a little under my rib cage. It wasn’t enough to be painful but more than enough to be uncomfortable. Once I stood up and started walking around, the discomfort disappeared. Almost. The little tender spot under the ribs reminded me that it’s best to remove my gun and WACH before anything other than a short car journey.

I carry all the time; I’m accustomed to accomplishing a wide range of domestic tasks while armed. Wearing the Ruger-equipped WACH through my daily chores wasn’t a burden, but I can definitely feel its presence — more than I would with an outside-the-waistband holster.

I’m wearing the WACH now with my three-year-old son on my lap “helping mommy,” which highlights the safety aspect of appendix carry. The WACH forces me to sit up straight to keep it from digging in to my ribs. (Posture Nazis would view that as a feature not a bug.)

So, is the CrossBreed IWB Women’s Appendix Carry Holster a female-specific product or a pure pander play?

As far as the softer leather is concerned, Winston Churchill never wore anything less than silk underwear. ‘Nuff said? The WACH’s rounded corners are just as much a blessing to a man as a woman. And the holster’s small size only means it carries a small gun, a non-gender specific option. So yes, yes it is a marketing ploy. But the CrossBreed IWB Women’s Appendix Carry Holster is still a fine, useful product.

Comfort * * * *
The CrossBreed IWB Women’s Appendix Carry Holster carries comfortably in most situations. Driving is not one of them. (YMMV)

Retention * * * * *
CrossBreed took a gamble by deleting adjustable retention, but it paid off.

Concealability * * * *
A skin-tight shirt isn’t going to work here, but you can go fairly snug and still avoid printing.

Value * * * *
At $59.95, the CrossBreed IWB Women’s Appendix Carry Holster is not an inexpensive option. But the quality is there and CrossBreed’s “Two Week, Try it Free Guarantee” means you won’t be wasting your money.

Overall * * * *
Star deleted for discomfort while sitting, but that’s the only problem I could find. CrossBreed makes these for a few gun models. It’s hard to say if the issue’s a style, brand or body-specific problem.