Our dear leader is a big fan of carrying an extra magazine. Not a spare, but an extra. The way he figures it, a magazine is the most likely thing to fail, so carrying another one is a smart move. The issue that I soon encountered carrying an extra mag is likely the same everyone runs up against — where do I put the damn thing? Blackpoint has an option with their M.A.P. that might fix what ails ya’ . . .

I tried carrying an extra mag in my pocket at one point, but like most, I found out quickly that it was never where I wanted it to be. And with some pants, the question soon became, “So, you happy to see me? Or is that a mag in your pants?” I never got a chance to check out one of those cool clippy things, but given the amount of crap that’s usually in my pockets, the only viable location for a spare mag is off my left hip.

The issue there is that the belt-mounted mag holders have all been driven by some sort of competition focus. These are usually super fast on the draw but print like crazy. They’re also really bad about ensuring the magazine floor plate digs into the middle of my ribs. Again, great for those times when I need to reload, but for the other 99.99% of the time, an enormous pain in the ass.

As you’d imagine, things that are a pain aren’t carried, and before long, an extra mag, snug as a bug in a rug, sat in a belt-mounted holster in my truck’s center console. Black point’s M.A.P. has reinvigorated my desire to carry an extra magazine by doing it in a true holster. It has two sides of Kydex, two belt clips, and the leather wing system that adorns most of their holsters. It can be adjusted slightly for ride height, but once it’s set, it helps full-size magazines virtually disappear. I had no problem wearing a light T-shirt with this, and nobody was the wiser. The M.A.P. is also unique in that it is supposed to be part of a daisy chain of accessory pouches. So, if I got serious about carrying a flashlight, a multitool, or (no shit) a dip can, I could add those accessories to the flappy little wings. Weirdly, the model that Blackpoint sent me is set up for IWB carry, but the photos on their website show OWB usage of their pouch system. I guess if you’re setting up an IDPA rig off your belt, or if you want to have a pretty serious collection of gear to show off at the next open carry rally, you could go that route. For me, the IWB clips were perfect and tuckable!

A brief note on speed. Now that I finally own a shot timer, I’ve been using it more and more for evaluating products. I found that the Blackpoint system, set up as an IWB rig was a touch slower than my OWB belt clip models. That’s a tradeoff for a much more discreet and comfortable method of carrying an extra magazine. Looking at video of myself reloading, I found that the having the magazine higher and further away from my body resulted in an easier time grasping the magazine. The M.A.P. seems to hold the mags lower, and tighter to the body (duh), but also with a bit more force. As you can see in the photos above, the holster covers better than half of the magazine and that’s a lot of contact area vs. my competition holders which only touch the very end of the mags. You’ll be a little slower on the reload, but you’ll likely have a magazine to reload from, because it is so dang comfortable. 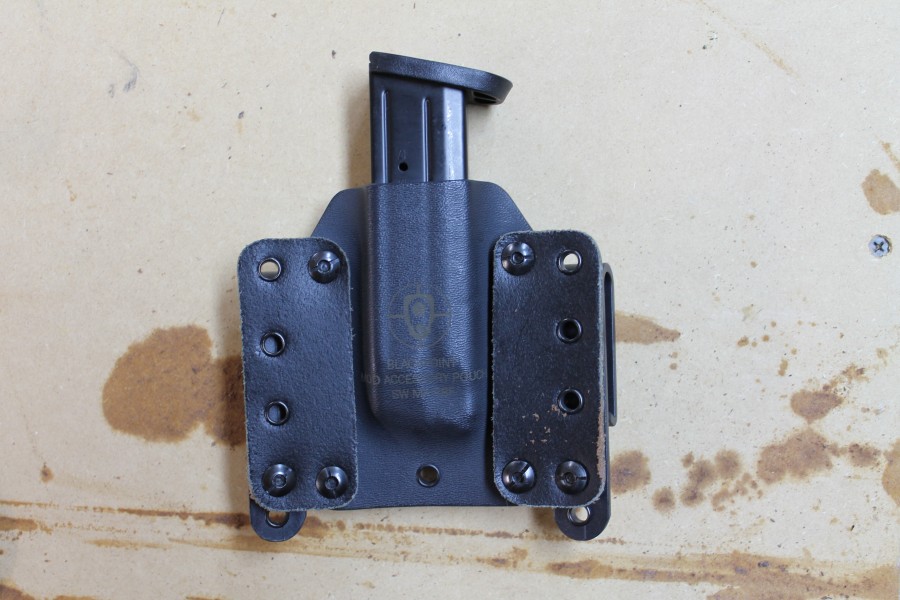 I know I should be carrying an extra mag. I also know I’m supposed to eat leafy greens and walk 10,000 steps every day. I often don’t either of those things. Blackpoint has successfully created a magazine carrier that’s comfy and unobtrusive enough that my only reason for not carrying an extra magazine is my own inherent sloth. Just like the tourniquets that are stashed all over my house and every day carry backpack, an extra magazine is worth its weight in gold when you really need it. AT $45, this is a pricey little bugger, but it gets me carrying a spare, so it’s probably worth it.