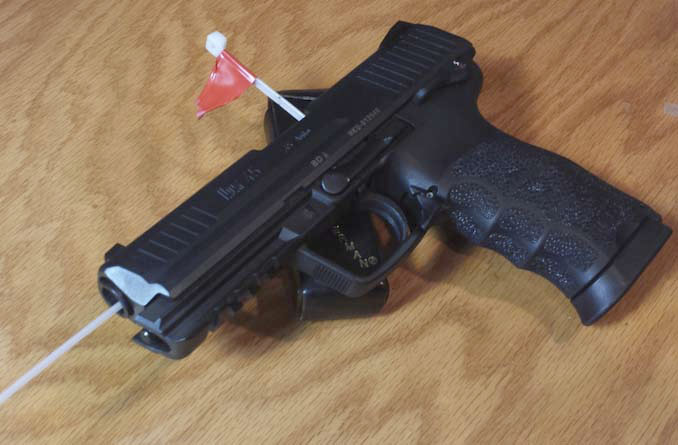 If there’s one thing that any concealed carry training regimen should include, it’s dry firing practice. And plenty of it. Some might even argue that it’s the most important training a concealed carrier can do.

Dry firing is the surest way to master trigger control and tame recoil anticipation. Just about anyone who’s considered an expert with a gun – competitors, hunters or real life operators – will tell you that they include plenty of dry firing as a regular part of their training.

For all the attention paid to sights and sighting techniques (rear sight alignment, front sight press) trigger control and mastery is arguably more important. All the sighting in the world isn’t going to matter much if your trigger pull haphazardly pulls your pistol off target.

Think about the most common causes of shooting poor groups. People who don’t use enough finger (using just the fingertip to actuate the trigger) usually wind up pulling shots right. Those who use too much digit wind up pushing shots left. Those who pull the trigger, rather than squeezing it will also lose their point of aim as the shot breaks.

One of the best ways to cure trigger these ills is by dry firing. Once you’ve learned a good dry firing exercise, a shooter can improve their trigger technique drastically with practice. Once having acquired good trigger technique, you can keep those skills sharp with regular dry fire reps.

Another common cause of poor shooting is recoil anticipation, which has two common cures. One is more time behind the gun. The other…wait for it…dry firing. And when you’re dry firing practice the “surprised break” trigger technique.

The surprised break is a technique wherein the shooter begins to squeeze the trigger, focusing on the squeeze and keeping the sights on target until the trigger breaks. Concentrate on an even, smooth pull, and let the break of the trigger “surprise” you, without anticipating it.

The “compressed surprise break” taught by Jeff Cooper and Gunsite is more or less the same thing – it’s just done in more rapidly rather than in the slow, controlled fashion of the traditional surprised break exercise.

How are these methods taught to students? They all start by dry firing

By learning to concentrate on the sight alignment and the trigger squeeze rather than anything else, the shooter can get themselves out of flinching, jerking and otherwise fouling shots due to recoil anticipation.

Do a bit of reading on the various recognized authorities on guns and shooting over the past century and you’ll be hard-pressed to find one of them who didn’t see some utility in dry firing. As mentioned, Jeff Cooper certainly did. He was known to dry fire his rifle while watching television and his pistols just about any time.

CCW instructors nationwide use dry firing as an exercise with their students to hone trigger control. Competitive shooters? Same thing. Rob Leatham and Jerry Miculek both use it as part of their regular training and teach it to others.

W.D.M. “Karamojo” Bell, an ivory hunter from the early 20th century, was famous for mastering a brain shot on elephants from an oblique angle behind the animal (still called the “Bell shot” to this day) using only a 7x57mm Mauser, often making single-shot kills. Bell, who was known for wingshooting cormorants with a .318 Westley-Richards offhand (and with iron sights, no less) advocated dry firing as the most important practice a shooter can engage in.

He often dry-fired at distant targets while on the march. He probably got a lot of practice in, too, as he was known to wear out a dozen pairs of boots per year.

In fact one of the few things Jack O’Connor and Elmer Keith agreed on was the benefits of dry firing.

But enough examples. The point is that the experts advocate it for good reason. It’s easy, inexpensive and wonderfully effective. And that’s why it should be part of every shooter’s regular training regimen.