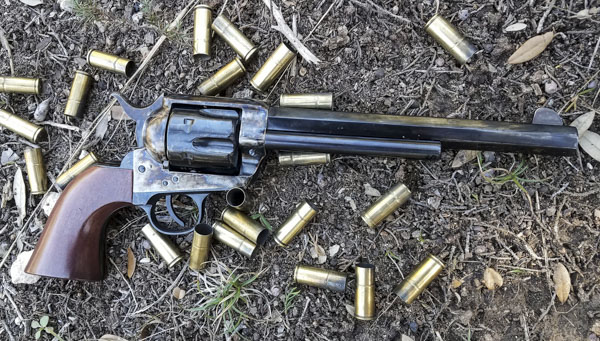 Much like .45-70, .30-06 and other cartridges, the .45 Colt — aka .45 Long Colt — is an old cartridge design, dating back more than a century. When first invented, it was propelled by black powder. In fact, much of today’s .45 Colt ammunition still is since one of the most popular uses for it is cowboy action shooting.

That’s probably the most popular use of most pistols chambered in the .45 Colt these days, as reproductions of Colt Single Action Army, S&W Model 3, cartridge-converted Remington New Model Army and Colt Open Top pistols are quite popular for the CAS crowd and general collecting. You can even get a Walker Colt repro and convert it…if you don’t mind a pistol the size of your arm.

Given that only a few modern revolvers are made for .45 Colt – far fewer than .44 Magnum and people who go for the high-end hunting handguns are generally more apt to select .454 Casull – it seems that .45 Colt still manages to hang in there.

But shouldn’t it be getting more love than it does? Big-bore revolvers just aren’t a lot of people’s cup of tea in this age of compact poly striker nines, but there’s a bit more than meets the eye when it comes to the old flying ashtray.

The first thing to know about .45 Colt is that – much like some of the aforementioned older cartridges – the march of time has made it far more diverse. The case length allows for loading more powder than many other rounds are capable of. The result? A plethora of loads, ranging from soft BP loads for cowboy shooting all the way to full-test hunting rounds that equal the .44 Magnum in every sense of the word. The full-house rounds also get .44 Magnum performance with about 80 percent of the chamber pressure. Mileage will vary but the prevailing wisdom seems to be that a stout .44 Mag produces about 38,000 psi, while the .45 Colt will only generate around 25,000 psi to send a bullet downrange at more than 1200 fps.

That makes it a great backup gun in the woods and/or handgun hunting round. Heck, you can even get a lever gun in .45 Colt and use the same rounds in your belt gun.

As for self-defense use — after all, far more two-legged predators have been downed with this round than four-legged ones — the even average .45 Colt loads give you everything .45 ACP does, but with less chamber pressure and basically the same velocity and muzzle energy. If you’re a fan of 800-ish fps in a big hollowpoint, the .45 Colt will definitely fit the bill, and the reproduction guns can handle most standard-pressure loadings.

So you can totally load an Uberti SAA with 200-grain LSWCHP. It may not be ideal for the biggest four-legged critters, but it will do the trick on most two-legged predators with accurate fire.

Speaking of ACP, some .45 Colt revolvers come with machined cylinders, allowing them to accept moon clips and fire .45 ACP if desired. (Ruger’s Blackhawk and Redhawk revolvers, for instance, are both available in convertible forms.) That means you can do a whole lot more shooting than your buddy who has a Model 29.

Besides…when was the last time you saw .44 Special at your LGS? That said, for a nightstand or woods gun, it’s one of the best and most versatile (and frequently affordable) options out there. Get a Model 29 if you want one. but if a big-bore revolver is in your future, don’t overlook something drilled for .45 Colt. You might be missing more than you know.