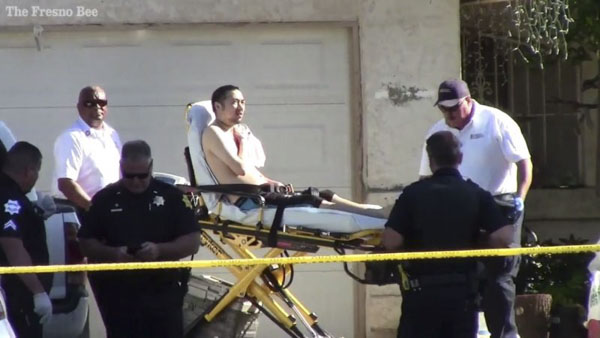 On June 6, 2017, in a quiet residential area of Fresno, California, a home invasion resulted in a gunfight. The 30-year-old victim who fought back was wounded along with another man. The two home invaders were killed, as was the father of the wounded defender. The defensive firearm used by the homeowner was described as an AR-15.

Yang said the family was preparing to celebrate her brother-in-law’s birthday when in the early morning two armed suspects walked through their front door. The father, 69-year-old Chong Yee Yang, hollered to warn his children– one of his son’s (sic) ran out with an AR-15 and that’s when a gun fight began.

Elijah Mays, 27, and Xavier Williams, 23, are from Stockton and both have extensive criminal histories. Their records include murder, robbery, and home invasion charges.

No drugs were found at the house.

As a result of the shooting, Mays, Williams, and 69-year old Chong Yang died. Yang was the father of the 30-year old man. That man survived with only a wound to the shoulder, and Dyer said he remains in stable condition. Dyer said Mays and Williams were gang members. Criminal records from San Joaquin County show the two had been arrested previously for robbery, grand theft, and even murder. But why they came to the house armed is still being investigated. It isn’t known if California’s severe restrictions on magazine capacity hampered the defensive shooter in this situation. Neither is it known how many crimes were likely prevented, and how many lives saved, by retiring Mays and Williams. Both were career criminals, aged 23, and 27 with the potential for hundreds of crimes in their future.

AR-15 type rifles are excellent choices for home defense. They’re powerful and easy to handle. With the right ammunition, they don’t over-penetrate. Normally, they have excellent magazine capacity to deal with multiple attackers, however it’s now illegal in California to sell any magazine greater than a 10-round capacity. After July 1, it will be illegal to own one.

Anti-rights activists claim that semi-auto rifles aren’t useful in defense of home and self. This situation is just another data point disproving that claim.