Announced earlier this fall, Federal Premium‘s new cartridge, the .224 Valkyrie, starts shipping this month. Supersonic to 1,300 yards, this AR-15-compatible round stretches the capabilities of the platform beyond the 6.5 Grendel and other options. How does it stack up? Read the following article — written by Federal — for all sorts of comparison points of the .224 Valkyrie vs. the competition. Ready to go? Rifles and uppers are already being manufactured by Savage Arms, JP Enterprises, Masterpiece Arms, Seekins Precision, LWRCI, LaRue Tactical, LMT, Q LLC, Mossberg, C&H Precision Weapons, Barrett, Accurate Mag, Precision Firearms, CMMG, and more. 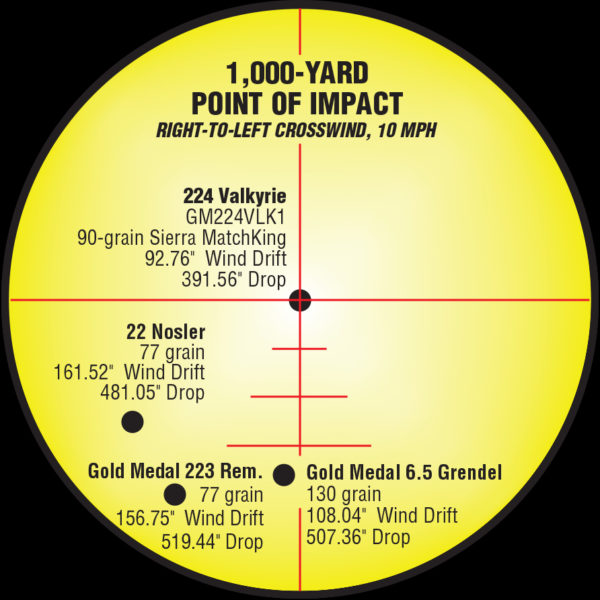 224 Valkyrie Versus the World

How the newest MSR 15 round outpaces all of its competition

Initially available in a 90-grain Gold Medal Sierra MatchKing, 60-grain Nosler Ballistic Tip Varmint, 90-grain Fusion MSR and 75-grain American Eagle TMJ, the lineup offers a bullet for everything from casual target shooting to serious competition and hunting everything from varmints to medium-size game like deer and hogs.

But how does the cartridge’s ballistics stack up to similar and even larger competition?

The 224 Valkyrie is fast. A round loaded with the 90-grain Gold Medal Sierra MatchKing produces a muzzle velocity of 2,700 feet per second; it maintains a blistering 1,950 fps pace at 500 yards and 1,359 fps when crossing the 1,000-yard line. In fact, it remains supersonic (faster than the speed of sound) past 1,300 yards. Velocities are based on 24-inch test barrels with a 1:7 twist.

Sustaining bullet speeds faster than the 1,125 fps speed of sound during long-range flight is critical to maximum accuracy. For starters, a projectile is more efficient and easier to put on target at higher speeds. But the transition from super- to subsonic flight (slower than the speed of sound) can also destabilize the bullet, causing it to tumble like a poorly thrown football instead of spinning in a perfect spiral like it does at supersonic speeds. Such destabilization wreaks havoc on accuracy, causing downrange performance to plummet.

“The longer you can fly faster than the speed of sound, the more you can maximize the accuracy and ballistics the bullet is designed to provide,” says elite long-range shooter and Federal Premium Brand Ambassador Jim Gilliland. “Once a bullet falls into subsonic flight, it’s much harder to hit your target.”

To put the Valkyrie’s performance into perspective against other match loads, a 223 Rem. 69-grain Gold Medal Sierra MatchKing produces a respectable 2,950 fps muzzle velocity, but slips into subsonic flight just 775 yards downrange—more than 500 yards less than the supersonic range of the 90-grain Sierra MatchKing 224 Valkyrie. Likewise, the 77-grain Custom Competition 22 Nosler rips from the muzzle at 2,950 fps, but quickly loses momentum before dropping below the sound barrier at 875 yards.

Still on the MSR 15 platform and in the 6.5mm class, a 130-grain Gold Medal Berger AR Hybrid 6.5 Grendel offers a 2,400 fps muzzle velocity and supersonic range of 1,100 yards, which also falls short compared to 224 Valkyrie.

The 224 Valkyrie also holds its own against popular 6mm rounds built for larger MSR 10 rifles. For example, a 108-grain Berger BT Target in 6mm Dasher produces a 2,950 fps muzzle velocity and 1,350-yard supersonic range, while the 115-grain DTAC in 6XC has a 2,950 fps muzzle velocity and stays supersonic out to 1,380 yards. While these numbers slightly surpass those of 224 Valkyrie, neither of these cartridges were designed to shoot in the MSR 15 platform.

The 224 Valkyrie is designed around bullets featuring incredibly aerodynamic designs, which is reflected by their ability to score the kind of sky-high ballistic coefficient (BC) ratings typically produced only by larger caliber bullets. BC refers to a characteristic value that describes how well a bullet flies through the air. The higher the number, the better it flies.

The 90-grain Sierra MatchKing leads the 224 Valkyrie lineup with a G1 ballistic coefficient of .563, which is noteworthy for virtually any bullet and exceptional for short-action rounds. In comparison, the 223 Rem. 69-grain Sierra MatchKing scores a G1 BC of .301 and even the 22 Nosler 77-grain Custom Competition round tops out in .340 BC territory. In the 6.5mm arena, BCs range from .421 to .564.

Other 224 Valkyrie offerings also offer admirable aerodynamics. The 75-grain American Eagle TMJ achieves a .400 BC and the Nosler Ballistic Tip Varmint, while lower, still registers a solid BC of .270. Such efficient flight produces higher downrange velocities and greater energy on impact, with less bullet drop.

In practical terms, elevated BCs help the bullet shoot flatter, buck the wind better and hit harder when it reaches the target. For example, at 1,000 yards the 224 Valkyrie 90-grain Gold Medal Sierra MatchKing experiences just 92.8 inches of drift with a 10 mph crosswind and drops 350 inches en route to the target. In comparison, the American Eagle 120-grain open-tip match 6.5 Grendel drifts 120 inches and drops 410 inches at the same range, under the same conditions.

The story is much the same with other small-caliber cartridges, meaning the only way to experience ballistics similar to those of the 224 Valkyrie is upsize to a heavier, more expensive MSR 10 platform paired with a larger-caliber round such as the 140-grain American Eagle 6.5 Creedmoor—which drifts 92.7 inches and drops 352 inches.

The 224 Valkyrie also packs plenty of punch. For example, the 90-grain Gold Medal Sierra MatchKing packs 1,457 foot-pounds of energy at the muzzle and retains 369 foot-pounds of that force at 1,000 yards.

On the recoil front, 224 Valkyrie provides comparable ballistics as larger counterparts like the 6.5 Creedmoor—but with as little as half the felt recoil.

In comparison, a 6.5 Creedmoor 130-grain Berger AR Hybrid OTM cartridge shot from a similar platform produces more than 10 pounds of recoil. Even the 6.5 Grendel loaded with the same bullet yields nearly 7 pounds of force.

The 224 Valkyrie’s mild recoil isn’t just easy on the shoulder. “Lower recoil allows you to see where your shots are going through the scope and make follow-up shots as needed, rather than having to reset your sight picture like you might have to with a heavier recoiling round,” explains Federal Premium development engineer Jacob Burns.

“It’s just another example of how Federal Premium’s new 224 Valkyrie is going to help shooters get more from their MSR 15,” he adds. “More long-range accuracy, more consistent performance—and more fun.”

Flight of the Valkyrie

A look at the 90-grain Sierra MatchKing 224 Valkyrie’s dope card provides more insight into the cartridge’s performance. With baseline factors including 29.92 barometric pressure, 0 percent humidity, an air temperature of 59 degrees Fahrenheit and 10 mph average crosswind, the round racks up consistent ballistics throughout its 1,300-yard journey.

The 224 Valkyrie is based on a 6.8 SPC case (necked down to .22 caliber), but comparing the two cartridges is an apples-to-oranges proposition. Designed by Special Forces personnel to increase the firepower of an M4 carbine, the 6.8 SPC uses a 0.277-inch diameter bullet and is based on a shortened version of the now-obsolete 30 Rem. case.

“The 6.8 SPC does not lend itself to using high-BC bullets for extended long-range shooting,” Burns explains. “With the 6.8 SPC, you’re launching a short .277 or 6.8mm caliber, 90-grain projectile with a lower BC at 2,850 fps. The 224 Valkyrie has a long .224 or 5.56mm caliber, 90-grain projectile with a very high BC that leaves the muzzle at 2,700 fps. When designing the Valkyrie, Federal Premium engineers didn’t consider the 6.8 SPC a comparable load. Instead, we aimed to beat the long-range ballistics of the 223 Rem., 22 Nosler and 6.5 Grendel.”

Besides stellar ballistics, the 224 Valkyrie packs an economical punch as well, significantly reducing the cost of 1,000-yard precision shooting for fun and competition. Suggested retails for a box of 20 224 Valkyrie rounds run from $31.95 for the 90-grain Gold Medal Sierra MatchKing down to just $13.95 for the 75-grain American Eagle TMJ. In comparison, 6.5 Creedmoor ammunition within the Federal Premium family costs from $51.95 per box for 140-grain Nosler AccuBond  to $26.95 for 120-grain American Eagle open-tip match.

In the end, the advantages 224 Valkyrie offers in ballistics, recoil, accuracy and economy don’t just make this hotshot new cartridge different for the sake of different. They make it hands-down the best performing MSR 15 cartridge ever conceived—perfect for anyone who wants to shoot farther, more accurately and more effectively than ever before.