Last week we posted an Ammoland article about maximum point blank range. The article touched on — but didn’t explain — some topics related to long range shooting. Among them: the Coriolis effect . . .

As far as shooting is concerned, the Coriolis effect is the Earth’s rotation causing the target to move away from the bullet as it travels. So you have to make adjustments, but do you compensate by aiming up, left, down, right of the target? Let’s find out . . .

First, the results of Coriolis effect:

Envision the following scenario, then we’ll scale it up to long range shooting over the moving Earth . . .

You’re in a car driving 60 mph down the highway. There’s a stationary target 200 yards away in a field directly off the driver side of the car. If you shoot out of the car at the target [ED: don’t shoot from cars], you’ll miss to the right of the target. That’s because your bullet was in your gun, in your car, going 60 mph in the car’s direction when it was fired. It kept moving in that direction even as it simultaneously flew away from the car.

Likewise, if you stand at this target and you fire directly at the driver side of the moving car [ED: don’t shoot at cars], you’ll also miss to the right. Your shot will have gone straight, but the car kept moving and was no longer in that spot when the bullet arrived. 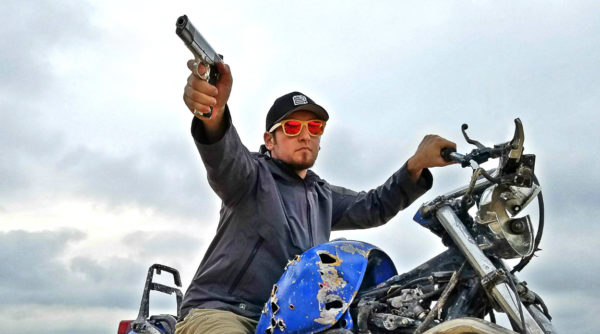 Conversely, if you’re shooting at a target off the passenger side of the same car going the same direction, you’d miss to the left, whether you’re shooting from car-to-target or from target-to-car.

In this metaphor, the car is the Earth’s equator. It’s moving East at 1,037 miles per hour. The Equator is the fastest-moving line of latitude on Earth because it’s the largest in diameter and, therefore, farthest from the Earth’s rotational axis.

Likewise, if you’re shooting south of the Equator, whether South from “the car” or North up towards it, you miss left/left. FYI, in the off chance you’re shooting across the Equator from one Hemisphere into the other at a target equidistant from the Equator as you, you’ll be spot-on.

If the car thing doesn’t make sense, another example — though it doesn’t scale up to match what’s truly going on in long range shooting on Earth — is that of a playground merry-go-round (roundabout).

You and a friend are on the merry-go-round and you’re sitting across from each other on opposite sides, facing inwards. It’s spinning fast, and you throw a ball across to your friend. What happens?

If you’re shooting East or West, regardless of hemisphere, Coriolis effect makes you miss high or low, as the earth is either effectively dropping below your bullet (shooting East) or coming up at it (shooting West).

The Earth is spinning to the East fast enough to complete one rotation every day (what a coincidence!). As mentioned, on the equator, that’s 1,037 miles per hour and it’s slower and slower as you approach the poles, until eventually you’re at a pole and you aren’t moving (discounting motion through space and time) at all, but just spinning in place (and you can only shoot either due South or due North).

Had you zeroed your rifle while shooting North or South, if you take a shot due East you’ll hit high and due West you’ll hit low. While most of us focus on the North/South effects of Coriolis causing a “windage” drift, the East/West effects on elevation are typically even greater.

How Much Does it Matter?

In most of these cases we’re talking about some 2 to 6 inches at 1,000 yards depending on caliber and, particularly in the case of East/West shooting, latitude.

• North/South at 1,000 yards: about 3 inches right if in Northern Hemisphere, left if in Southern
• East/West at 1,000 yards while here in Austin: 4 inches high if shooting East, low if West (at the equator it would be 4.6 inches)

Add spin drift — the bullet’s drift off course due to the right- or left-hand rotation on it imparted by the rifling (a typical .308 bullet is spinning something like 188,000 rpm) — to the Coriolis effect and you’re easily missing targets even in dead calm conditions.

For example, you’re looking at 39.2 inches of spin drift at 1,500 yards with the .308 load above. In most rifles it’s drift to the right, as most rifles have right-hand twist rifling. Add in Coriolis and you’re now 47.9 inches right of target and you’ve just missed by a long shot.

Your ballistic app will take care of it, don’t worry. But you’ll want to know your latitude and your azimuth (the direction you’re shooting, in degrees from true North). In many cases, the GPS in your phone can provide that information to your ballistic app. “You should end the Coriolis article with something funny.” — Robert