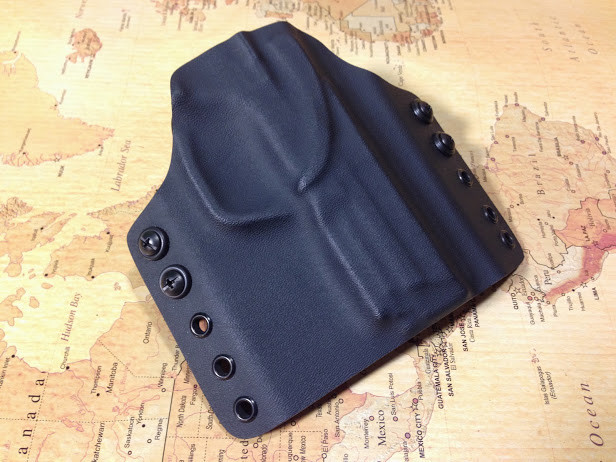 I have to admit, second only to flashlights, I am a holster addict. It started way back in 1966 when I started carrying a Browning Hi Power in a World War II M3 ‘tanker’ holster while flying around and sightseeing in that sunny garden paradise, South Vietnam. As often happens, vacation getaways end and I came home and became a cop. That’s when the holster fetish really kicked in. . .

It would seem police leather, including holsters, kicked into high gear in the late sixties and early seventies. John Bianchi, a young cop in southern California started his company, Safariland started making gear for the LAPD and Don Johnson and Miami Vice made the JackAss shoulder holster famous.

Over the years I slowly migrated to non-leather holsters and also gradually started using inside the waistband holsters almost exclusively. Many were really made well and the first kydex holsters started arriving and it became possible for new start up manufacturers to start plying their trade via the Internet.

I first heard of Overwatch holsters just after I blew $110.00 for a comparable holster by one of the really well known manufacturers. As I was still waiting for my ‘other’ holster, I decided to take a chance on the “Treadstone” for my S&W M&P Pro. I placed the order and the cost was only $45.00. Yep, less than half of what I sent to the other company. Being a firm believer in “you get what you pay for” I could hardly wait to see how badly I had been ripped off. Didn’t take it long to arrive either. As a matter of fact, the first time I wore it I was still waiting for that other big name” company’s product to arrive.

My daily carry preference is for an inside the waistband holsters. My normal everyday wear is a tee shirt and cargo shorts in the summer and a tee shirt and jeans in the winter. I learned long ago about the need for a quality leather belt and with a good IWB holster, I can hide whatever pistol I am carrying really well.

The Treadstone is a really well made (formed?) kydex IWB holster manufactured by a Brit expatriate, Ian Wright. Ian developed his technique after moving to this country, marrying the love of his life and catching a serious case of firearm addiction. He learned to shoot with a friend who subsequently formed a firearm training company called Fast OC (fastoc.com). While shooting, Ian began to wonder about making a quality holster and his first effort was the Overwatch and then the Overwatch Custom, both outside the waistband holsters. After making that first one, acquaintances began asking for their own copies and that soon progressed into a demand for an inside the waistband model. Thus, the Treadstone came about. The holster is very well constructed as are all of the higher quality kydex holster available in the market today. Ian goes a step further and adds a quality and extremely strong metal fastener that has been coated in Melanite which holds the holster to the belt with absolute zero movement.

I always test my new holsters by using three simple tests, retention, accessibility and comfort. Retention is easy, I unloaded and snugged my S&W M&P Pro into the holster and shook it as I held the holster upside down. No problem as there was absolutely no movement. Then, after securing the holster inside my shorts, I practiced drawing the weapon from under a tee shirt. The forward cant I ordered (as opposed to a straight drop) made drawing the weapon easy and fast. I was able to get a firm firing grip on the pistol; with the web of my hand firmly in place below the tang.

I also have a simple test for checking the comfort of a new holster. I put it on, jump in my Jeep Wrangler and drive to my other house 600 miles away. If I can still function at the end of the trip, it passes. When I tested my new Treadstone, I was accompanied by my wife, two Jack Russell terriers who would suddenly break into a frenzy of activity and barking every 100 miles or so and then go back to sleep and an African Grey Parrott who spent the entire 9 hours saying “Bad Dog!”

Wearing this holster for a nine hour drive with a full size pistol is absolutely no problem at all. The ultimate comfort test.

It does disappear when worn under a tee shirt and it sits low enough that a light unzipped coat would easily conceal it in other situations. Overwatch does not offer a tuckable model so four stars.

Offering comfort, concealability and both for a low cost, the Treadstone is all that it is advertised. It quickly became my go to holster for everyday carry. They offer models for S&W M&Ps, Glocks, Kahr, Sig and Ruger and I am pressuring them for Browning Hi Power Beretta 92 models.