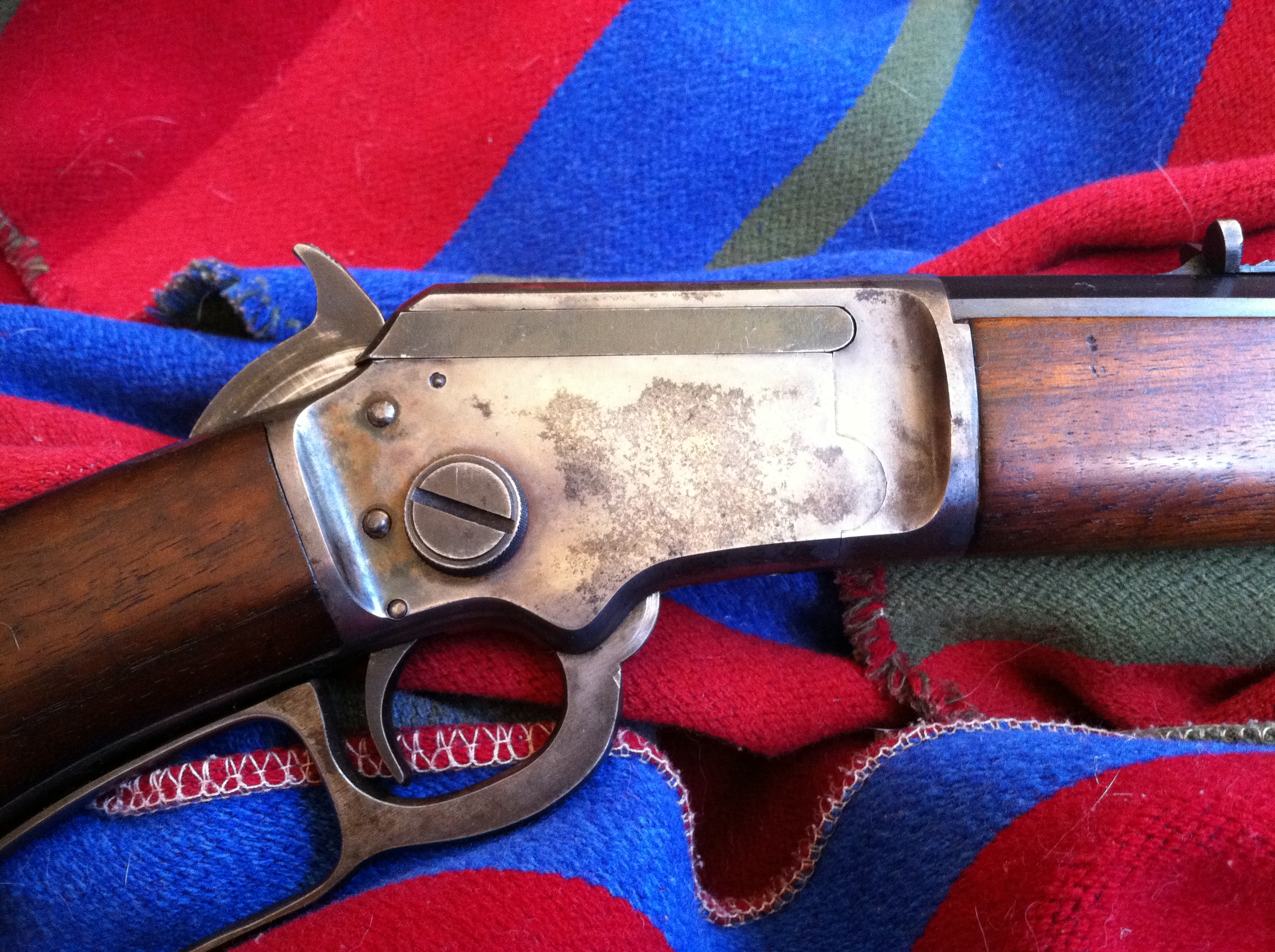 The Marlin Model 39 claims to be the oldest continually-produced cartridge rifle in history.  Its parent design was born during the unexceptional presidency of Benjamin Harrison, whose bust never even made it onto the Mount Rushmore Commemorative Paperweight.  Unlike that former Commander-In-Chief, this 19th Century Fox was blessed with what sales and marketing types like to call ‘legs.’  Legs so long, in fact, that it’s still a perennial favorite here in the 21st Century.

Does it deserve it?  You bet it does… The Marlin Model 39 is a lever-action .22 rimfire rifle, manufactured by Marlin between 1921 and 1937.  It has a 24″ fully octagonal barrel, a color-blued receiver, and a tube magazine that holds 16 and maybe 17 rounds of .22 Long Rifle.  The sighting apparatus is  a beaded front post and a drift-adjustable semi-buckhorn rear with an elevation ramp.    Like most .22 lever-actions it will also feed and fire .22 Short and Long cartridges, although we didn’t have any to run through our test rifle.

The Model 39 is descended from the Marlin Model 1891, a solid frame lever-action .22 introduced in…wait for it…1891.  The 1891 used the same side loading gate as the Winchester series of lever-actions, but jamming the tiny rimfire rounds through the tiny loading gate proved to be a major pain in the ass and Marlin switched to tube-loading the next year.  In keeping with their cryptic product designation codes, Marlin called this slightly-revised design the Model…1892.

Five years later the solid frame was changed to a takedown design which allowed the gun to be separated at the receiver for cleaning and storage, using a nickel for a screwdriver.  You’ve probably guessed that this model was called the Model 1897.  More minor changes were made in 1921 and the gun was renamed the Model 39, even though it wasn’t 1939 yet.  Go figure.

Toward the later part of the Model 39s long production run it became apparent that the old bolt design wasn’t strong enough to handle then-modern ‘high-speed’ .22 Long Rifle cartridges.  The bolt was redesigned to handle the higher pressures, and those Model 39s were designated with an “HS” prefix to their serial numbers.  Our test gun was such a rifle, happily safe to shoot with any .22 Long Rifle ammunition ever made.

Only minor changes were made throughout the evolution of the 1891/1892/1897/39/39A design, and most parts and dimensions remained constant from one year (and one model) to the next.  The 1897 has as much in common with a brand-new 39A as a 1980s Gen1 Glock has with its own latest iteration.  It’s not too much of a stretch to say that the 39A has been continuously produced since 1891, although there was a 4-year break in production during WWII.

The Model 39 is a little different in operation from a modern rimfire lever-action.  Which is to say, it’s a little bit better.  The despicable cross-bolt safety that has infected most of the lever-gun biosphere (although not the Henry) simply didn’t exist back then, and neither did the awkward and easily-broken tube magazine plunger.

My very first rifle was a Marlin Model 60 semi-automatic.  I still own it, but I can’t remember how many times I cringed as the spring-loaded plunger slammed violently into the magazine tube when I tipped the muzzle upwards to load it.  I also dropped it several times, and it’s a minor miracle (not quite the loaves and the fishes, but better than a good card trick) that it still works at all, much less perfectly. The Model 39 is so old-school that they hadn’t invented that kind of silliness yet. Instead of pulling out the plunger with the magazine spring inside it, you press the detent button (above) and pull out the outer magazine tube itself.  When pulled out about 18 inches the outer tube locks in place, and this reveals an inner magazine tube with the little cartridge-shaped cutout to slip the rounds into.  Since the outer tube locks in the ‘open’ position, you can tip up the muzzle without the plunger ramming itself back down, and one-handed loading is suddenly made simple.

While it’s still slower than feeding cartridges through a receiver loading gate, the Model 39’s design is infinitely better than the ‘modern’ (read: cheap) loading design of my Model 60 and of the Model 39As.  It doesn’t take two people to load a Model 39!  Why do so many modern tube-fed rifles get it so wrong?  If the Henry Rifle Co. would switch to this much more elegant loading system it might cost a few more bucks, but could gain them legions of shooters who simply cannot abide their loading procedure.

The rest of the rifle works exactly the way you’d want a lever-action to work.  Once you’ve loaded up the tube with sixteen rounds, you’re ready to rack and roll.  Unlike modern Marlin triggers, this old-school rifle sports a solid one-piece trigger which will not flop around.  It also uses a one-piece firing pin, which makes it more theoretically vulnerable to slam-fires if it’s dropped on its muzzle while loaded.  Since I’ve never done this with any firearm, I wasn’t concerned about it on the Model 39. With the twist of a nickel, the split receiver opens like a Faberge Egg, revealing a marvelous lockwork of hand-fit Steampunk intricacy.  This particular rifle was built between 1937 and 1939, with essentially the same lockwork that Marlin had been using for 30 years.  The craftsmen who built this gun knew what they were doing; even almost 75 years later it still fits together and runs like clockwork.  The only exception is the bolt itself, which seems as though it might have been a replacement part, transplanted from another rifle at some point.  It doesn’t fit with the same precision that every other part does, but it still fits better than the bolts I saw on new-manufacture Marlin 39As at a gun show last month.  And speaking of fit and finish…

You have to give a 75 year-old gun a little slack, especially when it comes to noncritical internal surfaces, blueing and wood-to-metal fit.  Those guys didn’t have CNC mills to do the work for them, and fancy coatings like Melonite or nickel-boron were decades in the future.  Every cut was measured twice, cut by hand-adjusted machine tools, and detail fit with files, stones, and emory cloth.  Steel was either in the white, color-hardened, or blued.

The blueing on this rifle has held up remarkably well.  I’m not a whiz at rating firearm finishes on the NRA scale, but the blued barrel still retains almost all of its original blueing except at the corners.  The color-hardened receiver hasn’t fared so well, because color hardening doesn’t produce as durable or protective a finish as ordinary blueing.  The receiver’s finish has dulled to a pleasing satin, with some patches of minor surface discoloration.

The wood is still in remarkably good shape.  75 years have caused some shrinkage away from the metal in places, but it still boasts a wood-to-metal fit that puts modern Marlins to shame.  The only jarring ‘character mark’ on the whole rifle is the hard plastic buttplate.  It’s a poorly-fitting replacement part, not made for this rifle, and the heel of the buttplate sticks out about 1/4″ proud of the wood of the buttstock itself.  It’s a pity, but I wouldn’t dream of having it ‘repaired.’  A gun like this can be ‘restored’ by an expert restorer (more akin to a museum conservator than to a gunsmith) using period parts, but never ‘repaired.’

With this in mind, the quality of workmanship that went into this rifle is excellent. The octagonal barrel flats are true and flat, and the receiver halves mate together like the hand-fit sidelocks of a bespoke English double.  All of the moving parts, of course, are slicker and smoother than silvered glass: they’ve been lapping against each other for three-fourths of a century, yet somehow they’re still tight and solid.

The lever and trigger are better than a brand-new Marlin, which may be scant praise, but also slightly better than the action and trigger of a heavily-customized race gun like my .357 Magnum Model 1894.  The old Marlin is at least the equal of the finest brass-framed lever guns I’ve ever fired like Henrys and Ubertis, and that’s the highest praise I can give.

The lever works with smooth and nearly silent precision.  The trigger offers only minimal takeup, breaks very cleanly at exactly three pounds, and then follows up with a little more overtravel than we’d like to see.  Did it affect accuracy?  We doubt it.

Feeding and functioning was, um, perfect.  The old Marlin fired all the contents of my ‘remainders’ bag of .22s: standard and high-velocity  roundnoses, hollowpoints and truncated cones from a half-dozen brands, randomly fed into the magazine tube.  Somehow the point of impact didn’t shift more than a quarter-inch at 30 yards from one brand of ammo to the next; I’m not sure that’s physically possible, but there it was.

It was also perfectly zeroed, right out of the gun case, with no fiddling whatever.  Neither of us are crack marksmen with iron sights (thanks for my crappy eyesight, law school) but Kurk and I discovered that we simply could not miss with this rifle; the trigger was so clean and the handling was so steady that even firing offhand at 50 yards we rarely missed a tin can or clay pigeon.  Or a bottle cap.  Or a fragment of a clay pigeon.

A marksman with better eyes than mine could teach more than a few bolt-action target shooters a lesson in accuracy with this rifle, but that’s not really what a lever-action .22 is for.  It’s built for small-game hunting, plinking and fun, and for me there may be no .22 rifle in the world that’s more fun a good lever-action.

How much fun is it?  Fun is hard to quantify (except perhaps in dollars, laughs or pints) but we had more of it after running 200 or so rounds through the Marlin than we did after running 400 rounds through my Evil Assault,  er, Modern Sporting Carbines.  We’d already had a great day shooting (great weather, no malfunctions, and we were both shooting exceptionally well) but the real fun didn’t start until we pulled out the Marlin.  After 75 years, it had both of us grinning like idiots and taking offhand potshots at tin cans 75 yards off.  And usually hitting them.

You just can’t buy that kind of fun.

No, I really meant it.  You can’t buy that kind of fun from Marlin; not today.  The virtues of this fine old rifle, sadly, are not embodied in the modern Model 39A’s on the rack at Wal-Mart.  Marlin’s historic Connecticut factory is an empty and shuttered ruin.  The clean lines of the Model 39’s receiver are now blemished by an ungainly cross-bolt safety with a plasticky look and feel.  The bright blued octagonal barrel is a thing of the past, replaced by a round barrel with a rough Dremel Tool finish.  The receiver halves of modern Model 39A’s no longer fit together tightly, and wood-to-metal fit is atrocious.

Marlin may yet rescue this design from a shameful demise (I keep hoping they’ll make it) but for now, if you want a good one, you have to get an old one.

Accuracy:  ****
More accurate than I could hope to be with iron sights.  The excellent trigger, long barrel and sighting radius make it a marvelous offhand rifle.

Shooting Ergonomics:  ****
Marlin has had handling nailed for 120 years.   (Loading ergonomics are a different story: **1/2.  The old-style tubular magazine loading was vastly better then than it is now, but still awkward. )

Aesthetics: *****
The classic lines of a classic rifle that Marlin should never have changed.  Wish it still had its original buttplate, though.