A few weeks ago, while researching weaponry for a game I’m building, I stumbled across a fun new addition to the armory: the Allen & Thurber pepperbox pistol.

The Allen & Thurber pepperbox wasn’t a military firearm, nor was it glamorous or elegant. It was a practical, affordable tool, which explains both its immense popularity and the fact that very few people today would recognize one if they saw it. (You can see it in a Forgotten Weapons video here.) From the 1830s through the 1850s, it was probably the most popular handgun in America, due to its reasonable price (about $10 new) and the ability to fire six shots before reloading. If you needed a not-too-expensive pistol that could be carried in a coat pocket or waistband or kept handy in a drawer while you went about your daily business, this was the gun of choice.

Pepperboxes are an interesting species of firearm. Once very common, they’ve largely faded from common knowledge. I had heard the term before, but it wasn’t until seeing Logan Metesh’s article about the strange little knuckleduster pistol (technically also a pepperbox) that I connected the word with the gun it describes. In the revolvers we’re familiar with, the chambers rotate to align with the barrel. A pepperbox, however, is a multi-barreled gun in which the lockwork rotates the entire assembly to align each barrel’s chamber with the hammer in turn.

While there were various configurations, the typical Allen & Thurber pepperbox had six un-rifled barrels and was fired by a flat, elongated hammer atop the pistol. The great majority were produced in .32 caliber, with a minority in .36 (and other, smaller calibers too). Its popularity declined as the more reliable and powerful metallic cartridge revolvers came into their own, but it was manufactured in dwindling numbers well into the 1880s.

In his memoirs of the California gold rush, Samuel Clemens (Mark Twain) described a friend’s Allen pepperbox this way:

Simply drawing the trigger back, the hammer would begin to rise and the barrel to turn over, and presently down would drop the hammer, and away would speed the ball. To aim along the turning barrel and hit the thing aimed at was a feat which was probably never done with an “Allen” in the world…

It was a cheerful weapon—the “Allen.” Sometimes all its six barrels would go off at once and then there was no safe place in all the region roundabout but behind it.

Twain may have exaggerated for comic effect, but there is truth in the description.

The Allen pepperbox wasn’t a long-range weapon by any stretch. It was more like a belly gun — meant to be used for self-defense in dire emergencies, when an attacker was closing in. Although rare, it was possible for a spark to flash from one percussion cap to the next, igniting anywhere from two to all six charges virtually simultaneously. It would have been a hell of a surprise for people on both ends of the gun. 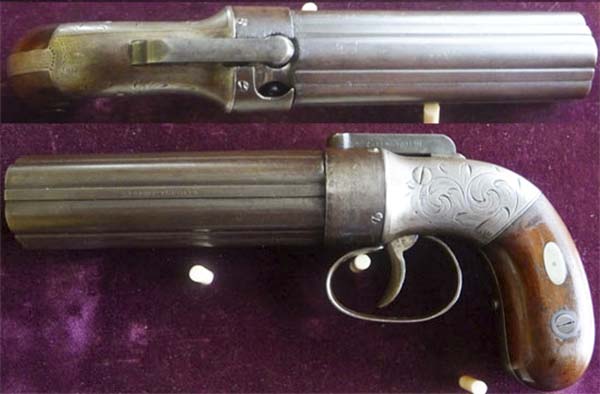 Despite its relative obscurity, the Allen Pepperbox played a significant part in American history that few are fully aware of. It’s not “the gun that won the West” or the subject of a pithy “God made men, Sam Colt made them equal” kind of slogan. But it was part of a single pivotal encounter that shaped the future of the west.

In June of 1844, Joseph Smith — the founding prophet of the Mormon religion — was at the jailhouse in Carthage, Illinois, awaiting trial along with his brother Hyrum, Willard Richards, and John Taylor. To be clear, although the four were in custody, they hadn’t exactly been jailed. A local militia group had sworn to kill Joseph and anyone they found with him, so he and his three counselors sat in a second-floor guardroom, awaiting a law enforcement delegation to escort them to the courthouse.

The upstart religion had a tumultuous relationship with its regional neighbors. To put a complex situation in a nutshell, mobs had been raised against the Mormons on several occasions, and homes and property on both sides were destroyed in an escalating sequence of aggression and retaliation. One of these episodes had led to the religion’s leaders turning themselves over to the law for trial, at which they expected to be acquitted.

But a local militia had other ideas. Violence was brewing again.

Earlier in the day, a few of Joseph’s friends had visited the jail, bringing letters, news, and food. It was a rainy morning, so they wore long coats. In their coat pockets — unsearched by the jailers — were two pistols. One was a single-shot pistol of unspecified make, and the other an Allen pepperbox in .32 caliber.

The Allen’s owner pressed the little pistol on his prophet, saying, “Here, you may have use for this.” Initially Joseph declined, saying that Mr. Wheelock might need it for his own protection on the way home, but eventually accepted the offer.

The single-shot pistol went to Hyrum, who protested, “I hate to use such things, or to see them used.” Joseph replied, “So do I. But we may have to, to defend ourselves.”

Those were prophetic words. Later that afternoon, the anti-Mormon militia overwhelmed the jailers and stormed up to the second-floor guardroom.

Hearing a commotion in the hall, Hyrum approached the closed door just as they fired a volley through it. He fell backward to the floor, struck by a musket ball just below his left eye. Joseph leapt to aid his brother, who exclaimed, “I am a dead man!” and lapsed into unconsciousness. A few seconds later Hyrum Smith was dead, his pistol still unfired in his pocket.

Meanwhile, Willard Richards and John Taylor were valiantly trying to hold the door against the assailants. Taylor used his sturdy walking stick to great effect, knocking the muskets away as they were thrust through the partially open door. Joseph then rushed to the door, stuck the pepperbox pistol around the door jamb, and emptied it at point-blank range into the mob.

A chain-fire might have been useful at that point, but instead the pistol suffered a more common malfunction. Only three of the six barrels fired.

Severely outnumbered, Joseph and his remaining companions couldn’t hold the door for long. When the assassins burst into the room, he made a desperate bid to escape through the window. He was shot several times in the attempt and fell dead to the ground outside.

In the end, the borrowed Allen pepperbox — that “cheerful weapon” of self-defense — was not up to the task. Against a dozen enemies or more, armed with muskets, it never could have been.

Known to friends, family, and the internet as Ing, Dallen is a marketing writer by day, a designer of roleplaying games by night, and a gun enthusiast at all times.