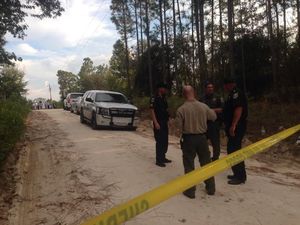 From usatoday.com: “Several news organizations are reporting a multiple shooting in Bell, Fla., and WCJB in Gainesville confirms that there have been deaths. Six children are among the dead, the Gilchrist County Journal reported on its Facebook page, and the Gainesville Sun tweeted that two adults and six children are dead in the incident.” Very little is known at this point though there are multiple reports that the shooting was a murder-suicide. For more we turn to CNN . . .

The sheriff told reporters the children ranged in age from 3 months to 10 years. He didn’t name the daughter or the grandchildren because not every relative had been notified of their deaths.

Schultz said Spirit, who called 911 around 4 p.m., killed himself after a deputy arrived on the scene.

Deputies had previously responded to calls from the home, owned by Spirit, on “numerous” occasions, officials said. Spirit had a criminal history, Schultz said.