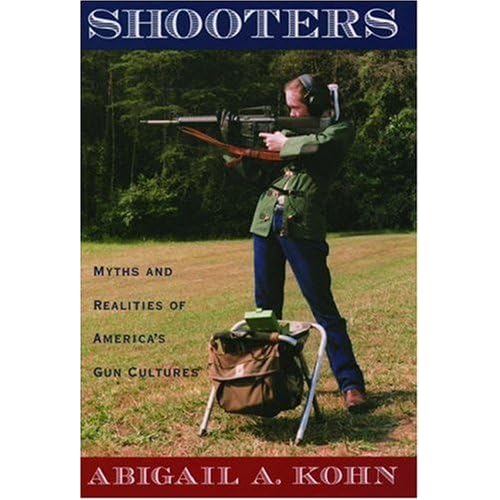 Although Abigail Kohn was raised in a liberal Jewish background, it would be hard to reduce her to cultural stereotype after reading Shooters: Myths and Realities of America’s Gun Culture. The book followed from her UCSF dissertation in anthropology, Shooters: The Moral World of Gun Enthusiasts. In May 2001 she posted this article for Reason Magazine: Their Aim Is True – Taking stock of America’s real gun culture. In May 2005 she participated in a Reason Debate: Straight Shooting on Gun Control.

Her book was published in December 2005, but I only ran across it because some folks here were touting More Guns, Less Crime. Based on the Amazon reviews, I had a feeling I already knew what Lott’s book was going to say, and Shooters was one of their alternate suggestions. I disregarded the peach schnapps jokes that were running through my head and sent for a copy.

Kohn sought to define what owning guns means to American gun owners. Any city would have had quirks, but I have to admit that San Francisco seemed like an outlier of a place for a study of American gun culture. I’m relatively new to guns myself, but in MD and PA I know a lot of guys that hunt and frequent gun ranges, and even some that shoot paintball. But I had no idea that Cowboy Action Shooting and SASS even existed – and I’ve never met anyone that calls himself, or herself, a shooter. But America is a big place, and she started near her campus at U Cal SF.

As I come away from the book, I feel that I learned some interesting history and was exposed to many new ideas, which reflects well on the book. But I also feel that the book was actually less balanced than the dispassionate anthropological tone would indicate. Kohn immersed herself in gun culture – and liked it. She made friends and though the weapons still scare her a bit, she found the shooting challenging and exciting. Through Kohn, these SF shooters come across as the sort of people you’d want to meet and have fun with on vacation, and in many ways she seems to have become one of them. That isn’t a bad thing, but I don’t really see her in the white lab coat.

Towards the end, Kohn switched gears fairly quickly from observer to political adviser and peacemaker, and while I think she tried very hard to be practical, it is very, very hard to get past the intractable positions on each side. For example, Gun Control Australia, where Kohn is now researching gun culture, writes:

As we see it, Kohn is trying to trick the public into believing that American shooters are taking the high moral ground by purchasing, and practicing to use guns.This is a trick and a trick which should be condemned.

Shooters gets a more positive review at this blog:

What makes the book truly useful, however, are her remarks about her fellow academics, as well as anti-gun liberals generally. Seen through her eyes, many of the arguments these people make seem hysterical and ridiculous, born out of ignorance and a lack of thought. This is not to say that gun owners get a thorough white-washing, but rather only that she uses a book likely to be read primarily by academic audiences to make it clear why those same academics are sometimes seen as irrational lunatics. Kohn is to be applauded in this effort, as a better understanding of gun owners as well as gun control advocates can only lead to improvements in our society’s handling of guns generally.

Indeed, as my friend and I discussed over burgers, despite the fact that he is relatively conservative and a gun lover, and I am relatively liberal, our views on gun control are essentially the same. We both support waiting periods, background checks, and restrictions on particularly dangerous types of firearms like machine guns and very heavy rifles. An approach like Kohn’s that encourages people to see these areas of overlap, rather than simply the hostile rhetoric of the gun control debate, is extremely useful.

Why is a Richmond Utility Trying to Keep Virginia Gun Owners From Voting in the November 2 Election?