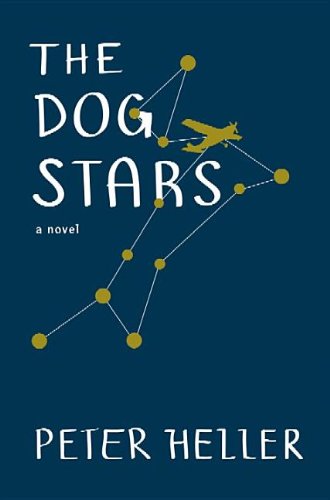 Aside from the gun nut thing, and much like our boy Leghorn, my other interests outside of work include aviation. According to my parents, my first full sentence was, “I see it!” while pointing to the sky at a passing plane. Like the gun thing, it is an open secret at work that I’ve got a soft spot for airplanes. Knowing this, one of my coworkers recommended that I read The Dog Stars because, “Its about a pilot and a gun nut living at an airport in a post apocalyptic world near Denver. Right up your alley.” He wasn’t wrong about my enjoyment of The Dog Stars, but not for the reasons he assumed . . .

The Dog Stars is the work of Peter Heller and was originally published in 2012. According to the author page in the book, Heller is a long time contributor to NPR, Outside Magazine, Men’s Journal, National Geographic, and Bloomberg Businessweek. He’s authored several nonfiction books, but to my knowledge this is his first published work of fiction. His second, The Painter published in May of this year. The Dog Stars was also chosen in August 2012 as one of Amazon’s best books of the month, for what its worth.

The Dog Stars is arranged into three books. The first gives an overall background on the characters, their day-by-day lives, a bit of background on how the main character, Hig, ended up at an abandoned airport in Erie, CO with a gun enthusiast named Bangley. In another life, Hig was a carpenter in the Denver area, but due to a nationwide flu pandemic that killed off 99.9% of the population including his wife, he wound up at the airport. Bangley showed up not too much later towing a trailer brimming with firearms, explosives, reloading supplies and enough machinist’s tools to continue building, modifying, and maintaining his collection for the foreseeable future. Books two and three can’t adequately be discussed without giving away significant spoilers, but know that they exist, and that they’re good.

The book is written in a very halting, choppy style that actually works well. The style is intentional as Hig’s dialogue is often internal and external, something Hig himself acknowledges in several parts of the book. Heller intentionally does not use quotation marks to blur the line between what Hig has kept to himself and what he has shared with the rest of the world. I found it to be much easier to consume because of the style. Your mileage might vary.

Central to the book is the strange relationship between Bangley and Hig. Bangley believes in a shoot first, ask questions later mentality, and takes great pride in his ability to pick off other survivors of the apocalypse using a .408 Cheytac sniper rifle. Heller in his acknowledgements section mentions that he collaborated with several former military members while writing The Dog Stars. This commitment to research shined in his descriptions of the firearms used throughout the book.

As the resident gun nut, Bangley’s collection is alluded to many times, especially in the guns he loans to Hig for various missions and duties around their compound. Bangley is a weird one, no doubt, but Heller manages to make him a thoroughly likeable character especially as the book progresses.

Hig is a man of the woods, no doubt a reflection on Heller’s own experiences writing about the great outdoors. He’s an avid fisherman, a practice he keeps up even in the midst of a terrifying apocalypse, though the loss of the trout in his favorite mountain streams seems to hurt him more than the loss of his wife. And while Bangley seems perfectly content to ride out the apocalypse picking off marauding bands of starving strangers, Hig spends a good portion of the book lamenting existence itself. He seems to find temporary relief by heading to the woods with his dog, Jasper, ostensibly to hunt for meat. During these excursions, he still fly fishes the mountain streams, seemingly content to catch only carp, most of which he feeds to his dog. As part of the open dialogue between he reader and Hig, it becomes apparent that these excursions are therapeutic, a fact Bangley acknowledges by encouraging Hig to “go on vacation” at various points throughout.

Hig’s usefulness to Bangley is his ability to scout from the skies using “The Beast”, a 1957 Cessna 182. Since most modes of transport are done for, invading marauders come in by foot, which means that Hig usually scouts a 50 mile radius for Bangley, giving him a few days of prep for any incoming raids. For our aviation enthusiast readers, you’ll likely recognize Hig’s Cessna as being the straight-tail model that along with the smaller 172, helped spark the aviation revolution of the late 1950’s and most of the 1960’s. The 182 is a worthy bush plane if piloted correctly, a mission that Heller writes about extensively in The Dog Stars.

But what of the guns? This being a gun blog, I’m obligated to mention that several types of long guns and pistols make an appearance, though Heller seemed satisfied to never get more specific than the name of the manufacturer. The aforementioned Cheytac appears several times as Bangley uses it to great success from a tower that he and Hig built. Also included are multiple references to the M4 platform rifle, though Heller never mentions the manufacturer. All of the M4s in The Dog Stars have giggle switch enabled, which I took as a sign that only a nationwide pandemic could nullify the NFA. Your interpretation might vary.

Bangley also loans a GLOCK to Hig for his wilderness adventures, though Heller never mentions if it’s a stout G20 or something more mundane like the G17. Also making appearances are an Uzi which Hig keeps in the plane for aerial attacks and a SIG rifle that seems to be constantly in pieces on Bangley’s work bench.

Unlike most of the books TTAG reviews, The Dog Stars is not centrally focused on a gun or guns. However, firearms ownership, their usefulness, and their usage against other humans is a recurring theme that threads its way through the entire piece. The more central plot point is Hig’s dissatisfaction with life in the compound; spurred on by a mysterious radio transmission he received many years before the entrance of the reader. The radio call came from the Grand Junction airport which lies beyond Hig’s fuel limited point of no return. An investigation of the caller would take him away from Erie, perhaps permanently. I’ll leave out any plot spoilers about his decision.

The Dog Stars is a deviation from your typical dystopian survivalist novel as the circumstances aren’t the central theme, but rather the human aspect of living nearly a decade beyond the fall of civilization as the characters knew it. Several Amazon reviewers have compared it to Cormac McCarthy’s The Road, a point I disagree with since The Dog Stars actually contains moments of happiness unlike The Road which seemed written solely to crush my soul. The Dog Stars contains accurate references to both airplanes and guns, a refreshing fact given how much is usually wrong in public portrayals of two of my favorite interests. I found The Dog Stars to be a fairly quick read, something you could put back on a rainy weekend when the shooting and flying aren’t that great.

Character Development: * * * * *
As the central character, Hig is given the most attention. As such, Heller portrays a very real picture of a man struggling with his own existence nine years after a nationwide pandemic that kills of the majority of the population including Hig’s wife and unborn child. His partner in defense, Bangley is equally fleshed out. Appearing throughout the book hard, callous, irritable, creepy, and rude, Heller does an excellent job of presenting his softer human side as the book progresses. Without giving too much away, there are other characters. Heller brings them to life too.

Style * * * *
As a reader with the attention span of a fruit fly, I found Heller’s halting, staccato presentation to be delightfully easy to digest. Readers who like a fair bit of flowery prose might be disappointed. That’s not to say that Heller does a poor job of painting beautiful imagery, quite the opposite actually. His pictures are quite vivid. More pointillism than broad sweeping strokes of vibrant color.

Realism * * * *
Suspending belief is somewhat of a prerequisite for reading any post apocalyptic novel sure, but accuracy still matters. Heller’s portrayals of firearms and aircraft functions were spot on, and helped with his credibility in other parts of the book. Not much time is spent on the menial day to day details like food preparation, water purification, waste removal, etc. but I didn’t find that it detracted from the work as a whole. Skeptical readers might not believe Bangley’s cold bore, 1400 yard hits on moving targets, but I think those readers that do will truly enjoy Bangley as sort of a weird, nutty shooting demigod. Again, suspend belief as necessary.

Overall * * * * *
Due to the fruit fly attention span thing, I rarely reread books, though I probably should given how much I enjoyed The Dog Stars the second time around. I think Heller did a fine job of crafting a story about humanity wrapped in a post apocalyptic survival novel. Even if you don’t enjoy firearms or airplanes, The Dog Stars is worth a read. Those that enjoy the finer things in life, guns and planes, will likely get a bit more joy out of the whole thing. Do yourself a favor, pick up a copy of The Dog Stars. I doubt you’ll be disappointed.