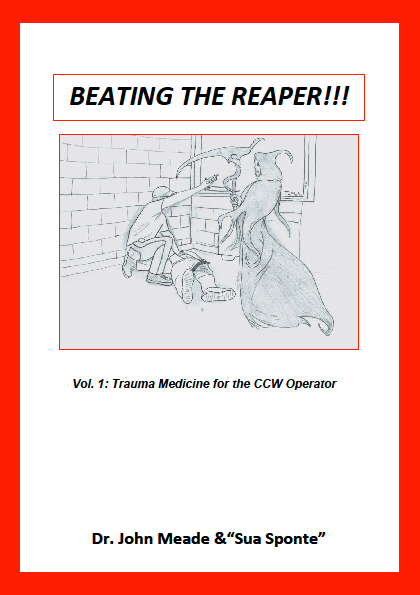 Do you have any clue what to do to treat yourself or others if someone is shot? Could you stop your own or someone else’s bleeding quickly enough to save a life? Are you familiar with the priority of treatment of various injuries? Those of us in the CCW/gun community place great value on self reliance. We believe that when seconds count, police are only minutes away. If you take that seriously, you should feel the same way about medical help. Most of us don’t treat this issue with the gravity it deserves. Beating the Reaper: Trauma Medicine for the CCW Operator by Dr. John Meade and “Sua Sponte” ($25 from One Source Tactical) is a great first step in educating yourself in lifesaving first aid. I bought the book last week and read it through in one sitting . . .

[FYI: graphic photos, all used with the authors’ permission, after the jump]

The authors of the book are both experienced in medical care in the context of a violent altercation. Dr. Meade is a board certified ER physician, EMS director, and instructor of Tactical Medics for SWAT teams. He also serves as a reserve officer on a SWAT team. Mr., well, “Sponte” is a Special Forces combat medic still active in the service and, as such, prefers a pseudonym. He has extensive experience treating injuries under fire in exotic locations around the world. While both authors are experienced treating injuries in the context of a fight, more importantly the authors have an ability to organize, present, and teach this material in a manner anyone can understand. The book is short (131 pages of large font) and takes only two to three hours to read cover to cover. It clearly explains the evaluation and first treatment of a penetrating trauma in the context of an ongoing violent event. I come to the book as a surgeon with 10 years of training and 10 years of experience behind me. The information isn’t dumbed down, but the terminology is explained so that almost any lay person can understand it. I’ve always said that medicine is mostly common sense, and Beating the Reaper presents a very simple, common sense approach to initial treatment of injuries that anyone can learn and apply.

The chapter on tactics is probably the most unique part of a book. It’s certainly the first time I have ever seen the term “fire superiority” used in a first aid book. The point of the chapter: winning the fight is the best first aid, otherwise you and those injured around you are as good as dead.

Once you or any other “friendly” person is injured, your immediate action must be to increase the ferocity of the fight and focus on eliminating the threat, rather than on treating casualties or addressing your own wounds. If you don’t win the fight, you may all die.

The chapter gives some techniques for one-handed weapon manipulations for hand guns and rifles, self aid and buddy aid. The authors point out that ambulance crews are taught not to enter an unsecured area that could be dangerous to them. That means you and anyone with you may be on your own from an aid perspective until police secure the scene for the ambulance crew. That means the faster you can end the fight, the faster the professionals will be able to reach you with medical help. There’s also a brief discussion of cover vs. concealment, how and when to move an injured person and functioning in low light environments. 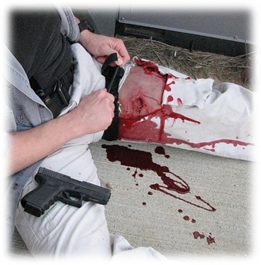 Chapter three gets the reader into heavy duty first aid, namely hemorrhage control and it’s worth the price of the book on its own. They go into some detail on the physiology of bleeding and follow up with several practical approaches to making it stop: direct pressure, pressure dressings, wound packing, hemostatic agents and tourniquets. The section on tourniquet use was extremely valuable, covering several different tourniquet systems including improvised tourniquets.

Chapters four and five cover airway management, breathing and chest injuries. Again, the physiology is discussed in plain layman’s terms followed by assessment and various simple maneuvers you can use to open and or maintain an airway, including how to use a simple device called a nasopharyngeal airway. Treatment of open pneumothorax and facial wounds is briefly discussed, too.

Next up is shock management and simple stabilization of orthopedic injuries, including improvised splinting. 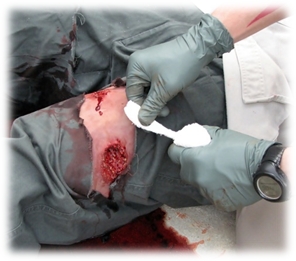 The book ends with something we all should think about: how to put together a first responder trauma kit, as well as evaluating some of the commercial kits currently on the market. A medical/tactical glossary follows the final chapter.

It’s hard to quibble with the content. I would have loved to learn about other areas such as surgical airways, inhalation injuries, blast injuries, burn care, needle decompression of pneumothorax, etc. But those things distract from the main focus of this book which is how a lay person can perform simple, life saving initial injury care they’re likely to experience after a defensive gun use. I suspect volume two may get into a few of these areas.

Overall, this is a valuable resource for virtually anyone. The book is aimed squarely at the average Joe who may suddenly be put in a life threatening situation with nothing other than his wits and a few simple tools at his disposal. And while this kind of first aid is vital for just about anyone, it should be required reading for those carrying a firearm.