A month ago I wrapped up the review of Beretta’s new Pico. It’s definitely the slimmest, tiniest .380 out there and I really dig the great sights, the quick and simple takedown, and the fact that only the easily-removable inner chassis is the serialized “firearm.” However, I wasn’t such a fan of the ejection problems I was experiencing. After a call with Beretta USA’s VP of Product Marketing and some further testing, there are some updates, tech notes, and best practices that I wanted to share here (some have subsequently been added to the owner’s manual), as I have experienced zero stoppages since . . .

Considering there is no SAAMI spec for .380 +P, I’m a bit surprised that Beretta manufactured a pistol that is officially rated to handle it. No question it’s built to do so, though, with the stiff recoil setup, stiff magazine springs, and stout stainless steel slide and takedown pin, etc. This is one little mouse gun through which you can confidently run the hottest “factory” ammo on the market. This “overbuilt” nature is why it definitely performs best, particularly right out of the box, with self-defense ammo that’s loaded a bit hotter than your standard target fare.

The downside to this is that it will likely take a little extra effort to get a Pico to flawlessly run practice ammo, especially if you load it to 6+1. I don’t think only being 100% reliable out of the box when self-defense ammo is used is a big issue for a gun designed specifically for concealed carry self-defense use, but it’s a problem when the consumer purchases it expecting it will flawlessly run cheap practice stuff without any extra effort on his or her part.

I still believe that the pistol is better tuned for standard target ammo by removing the smaller and weaker of the two recoil springs. NOTE: Beretta does not feel this way under any circumstance and you shouldn’t do it. I personally don’t think it’s asking too much of the consumer if Beretta marketed it as having two recoil setups and said something like “run both springs for +P ammo and only the stiffer, outer spring for standard pressure ammo,” but I understand why companies would want to avoid that. And, of course, after taking the steps outlined below I was left with two Picos that cycled all of the ammo brands I have, every time.

After spending hours on The Beretta Forum (plus wherever else Google took me) reading feedback and range reviews from lots of other Pico owners, it was clear that the ejection problems — the slide doesn’t always cycle rearwards enough to eject the spent case — were quite pervasive. Nearly every single instance of this happened with a combination of two things: target ammo as opposed to more powerful self-defense ammo, and when firing the first round in a full magazine or, even more frequently, the first round when loaded 6+1 (full mag plus one in the chamber). Pistols with higher serial numbers seem to do it a lot less, and we’ll discuss why soon. 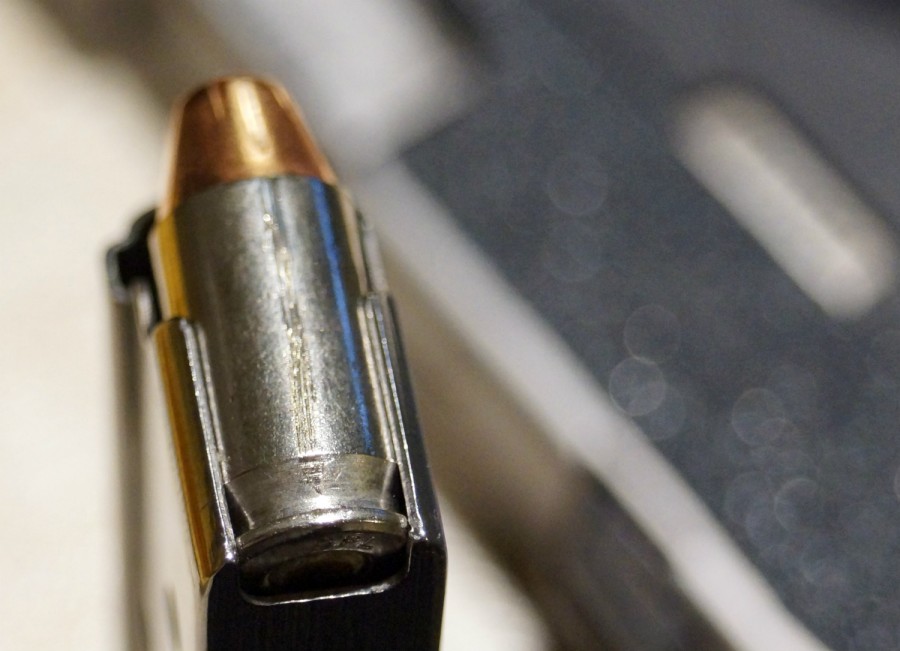 As you can see — and click any of the photos here to expand them — the “feed strip” on the bottom of the slide does drag on the top round in the magazine. Every pistol does this (the top round in the mag obviously has to pop above the bottom of the breech face so it can be stripped out of the mag and fed into the chamber), but the Pico sees a lot of pressure going on here thanks to a stiffer-than-average magazine spring and a particularly steep ‘ramp’ right behind the breech face. You can see some brass and copper deposits on that ‘ramp’ in the photo above.

When the slide reciprocates rearward, that ramp presses the top round down into the magazine. This is obviously a lot harder when the magazine is full and there’s a corresponding increase in pressure and friction on the bottom of the slide from that top round pressing up against it. You can feel this drag and bump when you rack the slide manually to chamber a round. Most ejection issues were with the Pico loaded to 6+1, less were with 5 in the mag and 1 in the chamber, and none happened when less rounds were in the magazine.

This never happened for me and, at least in the few dozen range reports I read, never happened to other owners when shooting self-defense ammo that’s hotter than your typical plinking/target ammo. It has enough oomph to overcome that initial drag as the slide bumps over the top round. It runs the Pico reliably straight out of the box.

Other contributing factors to the slide sometimes not reciprocating rearwards far enough with target ammo are a particularly stiff recoil spring setup and the fact that the slide cocks the hammer (although it doesn’t stay cocked) as it moves back so it has to overcome the strength of the hammer springs as well. All of these things and the minimal slide serrations are why you see my Pico sporting an absurd amount of grip tape. I actually did it as a bit of a joke, but once it was on…oh man. Love it! Note to Talon Grips: you guys need to make a full slide + grip frame kit for the Pico! Although, again, one of the cool things about the Pico (and the Nano) is that the frame is just a $20-$30 non-serialized piece of plastic so you really have low consequence, free rein to experiment with stippling and other permanent modification. Anyway…

Initial consumer feedback has prompted Beretta to make a few changes during the assembly process. More and/or different lubrication is applied to specific places, most notably under the slide (the entire feed strip length), and the machine(s) that repeatedly cycle every single pistol off the line by racking the slide and pulling the trigger are now doing that racking a bit more vigorously and for a longer amount of time. This gets the pistol closer to “broken-in” and is why end users are having better success with models from after this change, but there are still a couple of things you’ll want to do at home. Well, not at home so much as at the range. Unless you’re lucky enough where that’s the same place. But I digress…

If you can manage to run a full box of the hottest ammo you can find, like Buffalo Bore, Underwood, DoubleTap and the like — and feel free to go “+P” — you’re significantly more likely to then have a Pico in your hands that’s going to run basically any ammo out there. The Pico is a relatively snugly-fit, overbuilt little thing and it enjoys a bit of a break-in.

Lube relatively liberally. Especially on the entire feed strip under the slide with concentration on that ‘ramp’ and back where the hammer contacts. Also lube around the barrel hood and in the slide rails. The owner’s manual now has specific instructions, including photos, for how you should lubricate the outside of the barrel, the feed strip, and the rails. Download the addendum to the manual here.

The new springs do seem to take a bit of a “set.” Locking the slide back on a new Pico, filling the mags to capacity, and leaving it all like this for a few days or a couple weeks makes a noticeable, although minor difference. The cycling action over the course of a couple hundred rounds will break them in for real.

With this stuff accomplished, any stoppages in both Picos I had (one went back to Beretta after testing, the other is pictured here disguised as a skateboard) ceased entirely. Testing consisted of loading the Pico to 6+1, firing 2 rounds, then repeating this for over 125 rounds shooting with both hands and with only strong or weak hand. I ran FMJ target/plinking/practice ammo from Freedom Munitions, Blazer Brass, PPU, and Fiocchi plus just a few more self-defense rounds from Fiocchi (XTP), Federal (Hydra-Shok), and Buffalo Bore (JHP +P) for good measure. No stoppages.

This second Pico got to the fully reliable point faster than the first thanks to a little target practice with some powerful ammo and lubing in the right places a bit more heavily than I usually do.

I have even started carrying it a bit in two of the five or so holsters that Beretta already has available for the Pico: …and night sights by Trijicon just became available. They’re extremely nice, with large white dots and tritium inserts in all three. They come with brand new set screws and a hex wrench: