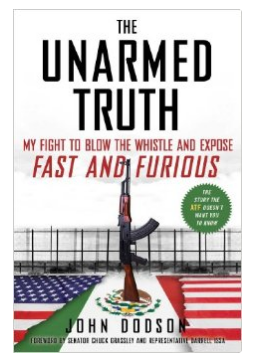 There’s been a fair amount of controversy surrounding ATF Agent John Dodson’s new book The Unarmed Truth: My Fight to Blow the Whistle and Expose Fast and Furious. Initially, the Bureau of Alcohol, Tobacco, Firearms and Explosives (And Really Big Fires) blocked publication, claiming the book would hurt morale and “have a detremental [sic] effect on our relationships with the DEA and FBI.” When that didn’t fly they cited Agent Dodson’s contractual obligation not to accept freelance work. And now the ATF’s OK’ed the book’s release—with sections redacted for “law-enforcement reasons.” This arrangement indicates that Dodson’s “tell-all” won’t answer the central question about a program that channeled some 2000 U.S. gun store guns to Mexican drug thugs over a period of ten months, arming the rip crew that murdered U.S. Border Patrol Agent Brian Terry . . .

Why? What was the point of Operation Fast and Furious?

Ever since F&F first came to light, the ATF has claimed that Fast and Furious was a sting operation. Let the bad guys get guns, follow the guns, arrest the bad guys. Only that’s not the way it went down. Not a single gun smuggler was arrested until after the scandal broke. The ones who were nabbed “retroactively” all received extremely light jail sentences.

Agent Dodson seems to have bought into the sting pretext but good. In Congressional testimony, he told of an incident where he followed a gun buyer loaded-up with illegal gun store guns. Fearing he was about to lose sight of the smuggler, who was separating himself from the stash, Dodson radioed his superiors for permission to make the arrest. His superiors told him “no.” He was surprised; proof positive that Agent Dodson was out of the loop.

Why? Why did the ATF allow that shipment, some 2000 illegally purchased guns in all, filter into Mexico without keeping track of them? There is no such thing as a “sting” operation where law enforcement officers let drugs, guns or other contraband out of their control. You simply don’t let guns (and grenades) “walk.” What would be the point of that? There are two competitive but not mutually exclusive theories. One: politics. Uncle Sam was arming the Sinaloa drug cartel against the potentially destabilizing Zetas. Two: gun control. Uncle Sam could use Fast and Furious guns recovered from Mexican crime scenes to build a case against “assault weapon” sales in the U.S.

Again, it seems clear that Agent Dodson doesn’t know who authorized Fast and Furious and their true intentions. Notice the book’s subtitle: My Fight to Blow the Whistle and Expose Fast and Furious. Not The Truth About Operation Fast and Furious. Dodson didn’t blow the whistle on the ATF when he was called off the surveillance job described above. Dodson only went public on F&F after Agent Terry was murdered, when Congressman Issa and Senator Grassley were hot on the ATF’s tail and Dodson’s ass was on the line. This book’s all about him.

Anyway, why would Dodson know the big picture? Fast and Furious was a black bag job, authorized by the NSA at the White House and run well outside of Congressional control, conducted with the knowledge of various federal agencies involved in drug and border enforcement (such as it is) and foreign policy (e.g., the FBI, DEA, CPB, CIA, NSA, DHS and the State Department). Hence the ATF’s initial objection that The Unarmed Truth would hurt inter-agency relations.

I reckon the bits of Dodson’s book redacted for “law-enforcement reasons” will be the [very few] parts hinting at a wider conspiracy. Dodson probably cut a deal with Uncle Sam that lets him make money from the book and sell himself as a truth teller while protecting the government from the real Fast and Furious scandal. Which isn’t anything like a “botched sting.”

As today’s revelations about U.S. spying on Mexico indicate, Obama’s Boyz and Hillary’s [State Department] harridans were up to their eyeballs in Mexican politics and, it should be noted, their illegal-drug-dependent economy. Quite how Fast and Furious played into that equation remains a mystery. But one thing is for sure: the ATF relished their role in Fast and Furious. The operation would have continued if Agent Terry had not paid for the Obama administration’s extra-legal activities with his life.

Agent Dodson is not the hero we need to expose the truth about Operation Fast and Furious. But who is?