The Smith & Wesson Model 19 “Combat Magnum” was one of the most beloved handguns ever made. Produced continuously from 1957 to 1999, tens of thousands of police officers carried a Model 19 on their hip, including US Immigration and Naturalization Service and the US Border Patrol agents. While larger departments could afford to issue Model 19s as duty weapons, many smaller PD’s gave their officers guidelines asking them to buy their own weapons. The Model 19 was frequently the best revolver these officers could afford.

The Model 19 for this review is a used gun, manufactured sometime between 1967-70. It’s an attractive gun, still sporting the original checkered walnut grips with round S&W medallion, and a 6″ barrel (introduced in 1963). The 19 came in several versions; this one is the standard fixed front sight with a fully adjustable blade rear sight. Beyond .357 Magnum caliber and affordability, the Model 19’s ergonomics was the key to its popularity. It’s hard to describe just how well and intuitively the Model 19 handles. The first thing you notice is the grip. Wide, thick, and with a great shelf for the thumb, the standard wood grips look good and provide excellent control of the gun.

Even with a six-inch barrel, the gun draws well and points even better. Transitioning from one target to the next is fast; the 39oz revolver moves remarkably well for a .357 Magnum. When everything is a game of compromises, the Model 19 was the first revolver to win that game, measuring weight against caliber in a perfect blend.

I usually head right to the range with a pistol. Because of the Model 19’s history and my love of wheel guns, I spent a few nights practicing my draw, dry fire and reload drills. (Unfortunately, I didn’t have any speed loaders.) I carried a Smith & Wesson J-frame for a couple of decades, and still carry a Model 29 when I hunt. So I wasn’t exactly starting from scratch.

Still, it took some getting used to. After I was happy with my basic performance, it was off to the range. 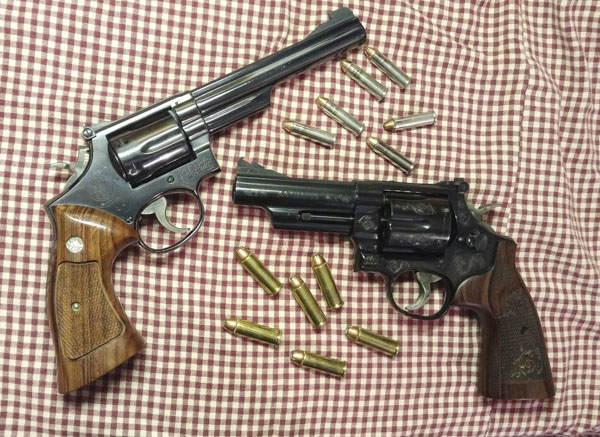 The Model 19 has something of a checkered past for reliability, one that’s likely due more to rumor than actual experience. The 19 isn’t the heavy N-frame my Model 29 is. The six-inch K-framed 19 weighs six ounces less. The reduction in metal exacts a price in the thickness and strength of the frame’s top strap.

Over time, using the .357 Magnum load, the temperature and pressure caused by these rounds will erode, cut into, and weaken the frame of the gun. For re-loaders, some powders have a little more of a history of this unfortunate degradation than others. The workaround: shoot range sessions with .38 specials, carry .357 Magnums for hunting and self-defense.

Used that way, it’s highly unlikely the gun would experience any significant erosion or cracking. I was interested in how long it would take a Magnum-only diet to damage a Model 19, so I asked around. I spoke with two long retired officers who carried (and loved) the four-inch Model 19. They verified what I had already found searching the S&W forums: the top strap erosion and frame cracking was only an issue after firing thousands of  rounds of .357.

Most officers simply never fired enough rounds through their revolvers during their careers for this to be an issue. But if you want to become really proficient shooting this gun, the .38/.357 combo is the way you want to go. As an aside, I had a conversation about this gun with a younger but experienced shooter. He claimed that with today’s modern loads, the .357 Magnum offers relatively little “stopping power” improvement over the 9mm+P. I’ve heard similar statements in the TTAG comment section and it seems to be a popular myth running around many forums.

If you’re talking about most commercial loads in a very short-barreled revolver, like a 2 1/2″ snubby, this statement is true. The .357 Magnum just can’t burn all that powder in such a short barrel. So you get some advantage, but not much.

However, once that barrel length increases to service pistol size, and certainly once you hit the four-inch mark, the .357 Magnum offers a tremendous advantage. In a six-inch barrel, it’s absolutely ridiculous. Using the same bullet weight and barrel length, the standard .357 Magnum is still travelling as fast or faster at 100 yards than the 9mm+P is at 50 yards. There’s just no comparison.

I put 270 rounds of commercial .357 Magnum through the gun over four days of shooting. I experienced no reliability issues whatsoever with any of the rounds tested. No flame cutting, erosion or apparent weakening of the frame. Unlike most of my reviews, I had to leave the gun idle for a couple of weeks between sessions, so I did a basic field cleaning at round 150 and a full detail strip and clean once I finished.

As a note, good on whoever owned and maintained this revolver before I got it. Although a used gun, it was in exceptional condition. I’ve never cleaned a gun I’ve reviewed before before, but I felt duty bound to put this one back in same shape in which I got it. To do that, I would highly recommend The S&W Revolvers; A Shop Manual by Jerry Kuhnhausen.

As far as accuracy, the Model 19 shot well. But I have to admit, I was expecting a little better. Using a wide variety of ammunition, none of my five-shot groups shot from a sandbag were larger than two inches at 25 yards. Using the factory Hornady 125gr. FTX round, I got 1.5″ groups, with one as small as 1.25″. That’s plenty good for self defense work, and also good enough for any hunting of light skinned game within the ballistic limits of the round. But I felt like the Smith & Wesson Model 19 could do better. The single action trigger never moved the sights, the sight radius is long for a pistol, and the grip gave me a rock solid hold. Try as I might, though, I only got one group out of 10 smaller than 1.5″.

Despite plenty of time on the range and a lot of time dry firing, I still can’t shoot this gun fast. Shooting from a leather holster I use for my seven-inch Ruger Bisley Blackhawk, my best draw and fire of one round into an eight-inch circle at 15 yards was 1.36 seconds. My best draw and fire of six shots into the same circle at 15 yards was 4.17 seconds.

Clearly, I’m no Jerry Miculek. I’m going to blame this on clearing six inches worth of barrel. (I’ll take whatever excuses I can get.) You might expect that the longer times, such as a .4 split time, were because of the recoil of the gun. Absolutely not. Considering the caliber, the Model 19’s recoil is very manageable. Part of that is due to the barrel length, but that grip plays a big part in double action fast (fastish?) fire.

Two-handed, it gave me plenty of real estate for an absolutely rock-solid hold on the mid-framed Magnum. It put my finger in an ideal position on the trigger, and gave me a great platform for my thumb for either hand.

My slow times were simply due to the trigger’s cycle time. I just couldn’t get the cylinder to turn fast enough. That was one of the places where I can certainly notice the difference between this gun and my Model 29. An object in motion tends to stay in motion; once it starts, the big .44 caliber cyclinder wants to keep on spinning. The trigger itself, however, is clearly superior on the older Model 19. 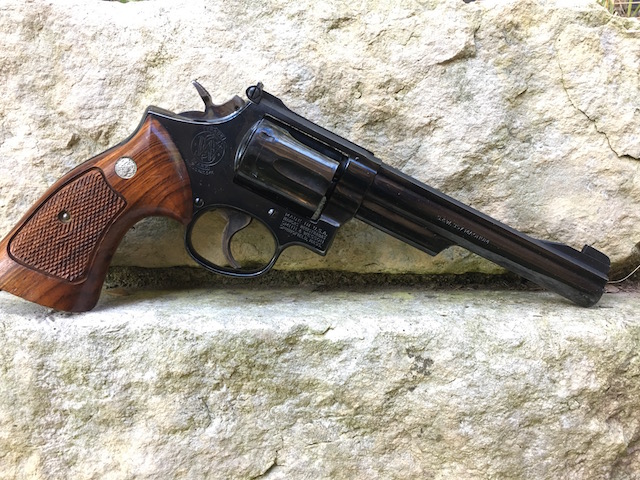 In single action, the trigger supposedly breaks at 4lbs. I don’t have a trigger gauge, but I would seriously doubt the SA pull weight was that heavy. Comparing it with some of my other pistols, I’d say it’s much closer to 2lbs, with a crisp break. Two-handed and in single action, this gun is giggly-fun easy to shoot.

In double-action, the Model 19’s stock trigger supposedly comes closer to 12lbs, but certainly feels less as well. The pull is smooth, with some stacking just before the hammer breaks. In fast fire I had to learn to feel for it, but it certainly lets you know right before the hammer falls.

What about single hand fire with a medium-framed .357? This is one place where this revolver absolutely shines. For someone like me, with size large hands, the Model 19 is simply a joy. It just points beautifully and with all that real estate in my palm, I found it very easy to hold the gun steady. The revolver simply falls into the hand naturally and I imagine it would be even more so in a four-inch model.

Back in the day, the Model 19 was described as the “perfect combat Magnum.” For a service grade carry revolver, the 19, especially with a 4″ barrel, is ideal. Plenty of caliber to get any job done, light enough to carry all day on the hip, and completely reliable. It’s accuracy is better than good enough, but not great. The pre-1971 Model 19 is a classic that earned its reputation.

Customization * *
Without a competent gunsmith, there are relatively few things you can do at home with this gun. With a competent smith, the options are limited only by their time and your money. But if you know what you want, shop around. Over the decades that this revolver was produced, many different variations came from the S&W factory.

Accuracy * * * *
Either two-handed or one-handed, double action or single action, this gun shot very well. But it never got close to breaking that 1″ mark.

Reliability * * * * *
Zero issues with a variety of rounds and a lot of magnum caliber shooting.

Style * * * *
This is a working man’s revolver, the Glock 17 of it’s day. And it certainly outclasses any of the common modern service pistols in fit and finish. A very good finish, but no deep pools of gleaming blue. No tool marks or poor fitting, but no embellishments either. Wood you would probably have to pay extra for nowadays, but was the standard when people cared about more than whatever was $5 cheaper than the gun next to it.

Overall * * * *
Only a few years ago you could buy this gun for $500-$600. I should have bought one then. The cost has risen substantially, as more and more people recognize a classic, and pay for the quality.