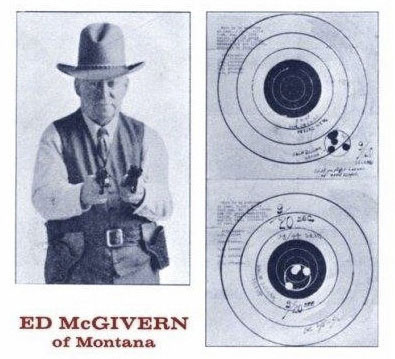 When the October 1974 issue of American Rifleman came out, featuring a cover story on Ed McGivern to celebrate the 100th anniversary of his birth, it would have a lasting impact on shooting sports to this day. Noted professional Team Smith & Wesson shooter Jerry Miculek credited that issue as being the one that got him into the idea of shooting for a living. Now, you may not recognize McGivern’s name, but if you don’t recognize Miculek’s name and realize that this is a big deal, then I’m afraid there’s no hope for you.

McGivern was born in Nebraska, but toured as “Ed McGivern of Montana.” In 1932 at the age of 57, he set a world record in the Guinness Book for “the greatest rapid fire feat” – he emptied two revolvers in less than two seconds. That record still stands, 84 years later.

Other notable shooting feats by Ed include:

Even though he owned and sometimes shot semiautomatic pistols, Ed claimed they were too slow and that he could shoot a revolver faster. He was such a fast shot that a standard stopwatch wasn’t good enough to accurately record how quickly he was firing. More sophisticated timing machines would malfunction as well, so he set out to devise his own timing device to measure his feats.

In addition to travelling the country, participating in shooting exhibitions, he also spent time training federal, state, and local law enforcement officers. Since the standard police weapon of the day was a six-shot revolver, Ed set out to show them just how accurate they could be with their duty weapons. As a testament to his efforts, McGivern proved that you could hit a man-sized target at 600 yards with a standard police revolver loaded with .357 Magnum cartridges.

Ed’s greatest contribution to the shooting community came in 1938 with the publication of his book, Fast and Fancy Revolver Shooting. Incredibly thorough and well-illustrated, it stands as the seminal work on revolver shooting. Whether your interest was in trick shots performed from the running board of a moving vehicle (which Miculek admits to trying himself), how to effectively fan a revolver, or how to use muzzle-rise to your advantage when shooting airborne targets, the answers are all in Ed’s book.

In addition to holding his own records, Jerry Miculek has attempted – and successfully broken – some of his predecessor’s records. Even so, he couldn’t take Ed’s place in the Guinness Book.

Ed’s legacy lives on today and can be seen at the NRA National Firearms Museum in Fairfax, VA. There, an assortment of his guns, his travelling trunk, and some of his targets are on display, just waiting to inspire the next generation of fast and fancy revolver shooters.