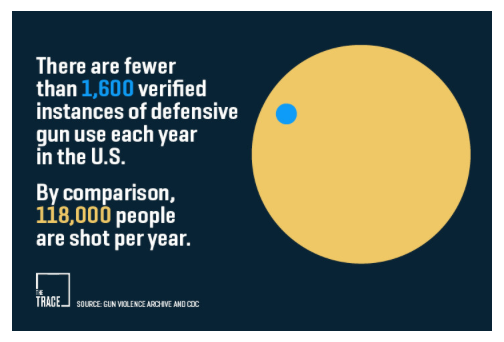 We’ve been noticing a concerted effort by proponents of civilian disarmament to entirely discredit the idea of defensive gun use. And for good reason. Most Americans support Second Amendment protections against government infringements on the right to keep and bear arms primarily because they cherish their natural right to self-defense. Michael Bloomberg’s anti-gun agitpropagandists have joined the campaign targeting the single greatest impediment to gun control with their article Gun-Rights Advocates Claim Owning a Gun Makes a Woman Safer. The Research Says They’re Wrong. Here’s their opening salvo . . .

. . . the available evidence does not support the conclusion that guns offer women increased protection. Myriad studies show that the NRA and its allies grossly misrepresent the actual dangers women face. It is people they know, not strangers, who pose the greatest threat.

This is what’s called a straw man argument. Truth be told, the NRA and its allies don’t divide threats against women between “people they know” and “people they don’t know.” They simply insist that a gun is the best tool a woman can use for self-defense against anyone, be they an abusive spouse, a burglar or a random rapist. And that anything that impedes the exercise of this right is acting against women’s (and men’s) self-interest.

What’s wrong with that logic?

Nothing. Especially when you consider that Americans’ constitutionally protected gun rights are not subject to arguments about social utility (i.e., the overall effectiveness of armed self-defense). The Trace and its allies ignore this fact, and do everything in their power to undermine the facts surrounding actual defensive gun uses. Like this . . .

There is also strong, data-based evidence that shows owning a gun, rather than making women safer, actually puts them at significantly greater risk of violent injury and death.

In some places and in some instances, women have, in fact, used guns to successfully defend themselves. But the case that gun rights advocates make when pitching guns as essential to women’s personal and family security goes beyond the anecdotal, leaning heavily on an oft-cited 1995 study by the Florida State University criminologist Gary Kleck — a study built on faulty research.

In his findings, Kleck estimated that women use guns to defend themselves 1.2 million times per year, and that 200,000 such defensive gun uses stopped sexual assaults. Those estimates have proved to be wildly inflated. Successful defensive gun use is, in fact, extremely rare among all people: There are fewer than 1,600 verified instances in the U.S. each year, according to the Gun Violence Archive. By comparison, annually, 118,000 people are injured, killed, or commit suicide with a gun.

The Trace’s money shot — the Gun Violence Archive‘s assertion that there only 1600 verified instances of defensive gun uses per year — doesn’t get a link. Huh. Methodology?

The Gun Violence Archive is an online archive of gun violence incidents collected from over 1,500 media, law enforcement, government and commercial sources daily in an effort to provide near-real time data about the results of gun violence.

Wait! The GVA researches incidents of “gun violence” not defensive gun uses. So where’d they come up with this 1600 DGU’s per year figure?  The Trace ain’t linking and Gun Violence Archive’s website ain’t got nothing. And so The Trace trots out The Big Lie and another straw man.

The evidence is clear: Women simply aren’t defending themselves with guns at a significant rate.

It’s possible that gun activists could use that fact as reason for getting more firearms into the hands and homes of more women. But here their argument hits its critical flaw: Every credible scientific study of women and guns in the last two decades strongly indicates that a firearm in a woman’s home is far more likely to be used against her or her family than to defend against an outside attacker. Increasing gun ownership by women would only heighten that risk.

I think the word “credible” means what The Trace wants it to mean. Meanwhile, authors Evan DePhillippis and Devin Hughes rely on misdirection to make their case against women owning guns.

Notice as well that The Trace propagandists are restricting their statistical analysis to guns used in the home. Nothing is said about defensive gun uses outside the home.

The rest of their diatribe deals with domestic abuse. I won’t trouble you with Mr. DePhillipis’ and Hughe’s defective logic in that regard. Suffice it to say, The Trace should be ashamed of themselves for trying to diminish the importance of defensive gun uses. Whatever happened to their argument “if it saves one life”?