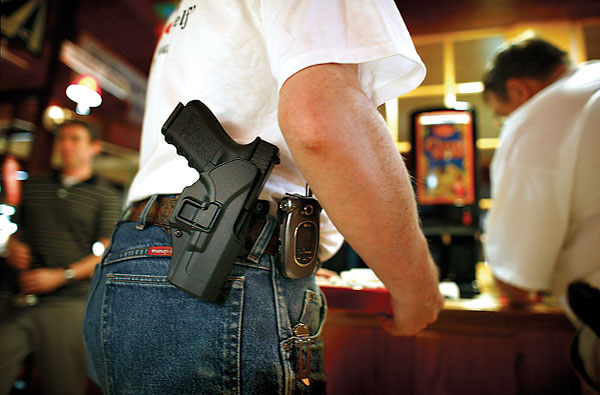 We’ve all been in conversations in which someone mentions gun control or their hatred of firearms. I had some relatives stay overnight with me a few days ago and they left with a different impression of guns than when they arrived. It isn’t that this couple hated guns, they just knew nothing about them other than the fact that pulling the trigger makes one go “bang.”  They don’t own any firearms, and although being with me probably didn’t make them change their minds about arming up, their perception of gun owners has changed, and for the better . . .

Since they arrived on a day that ends in a ‘y,’ I was armed when they rolled up to the house. I was locked and loaded, open carrying in my pink Rekkr holster. I immediately offered drinks, and as my brother-in-law sat down to talk, I poured one for him. Since I decided to partake in a small amount of whiskey with him, I disarmed. I removed the gun from my person, emptied the round from the chamber and placed it on a shelf above my desk well out of reach of my kids.

He was watching me. I don’t think he was scared, but he asked why I did that and I took the question as an opportunity to show him what I feel responsible gun ownership means. I simply explained that I won’t have a loaded gun on my hip if I decide to drink alcohol. It isn’t something that I feel is responsible, so I disarm. He seemed surprised, but impressed and while we didn’t get drunk, we sipped our whiskey and talked about my work here at TTAG.

I was impressed that he was open and asked honest questions. I didn’t talk down to him and he didn’t shut down on me, even when he asked if you can “hunt with an assault weapon.” While I explained what an assault weapon is and why the premise of the question was wrong, he asked to see an AR-15 so he could learn. He’d shot guns before, but not knowing how they work, he wanted to see for himself.

I showed him my AR, how it worked and the conversation even got to the bullet button. I was surprised when he agreed it’s a worthless idea because a bad guy isn’t going to spend the extra $25 to make an illegal gun legal. All I could do was smile and nod.

Calm discussion (and a little good whiskey) can often change minds. It isn’t that I expect this couple to go out and buy a rifle or handgun tomorrow…I don’t. But I’m confident that they now see firearm ownership in a slightly different light and perhaps even understand that responsible gun owners aren’t their enemies and don’t need to be regulated.

Rational conversations seem to yield better results, and after explaining the process of actually obtaining not just a gun, but a concealed carry permit in California, the couple understood. Two people who never thought much about guns came to the conclusion that California is far too restrictive to good people who wish to keep and bear arms. Baby steps….