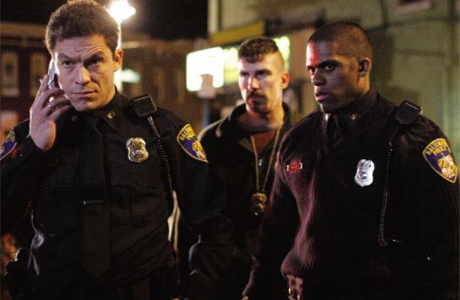 I got myself a DVD set of The Wire for my birthday. The show was renowned for its gritty realism, and despite the violence, even my wife is transfixed by the stories and characters, but if you read the Baltimore Sun and watch WBAL’s broadcasts, nothing that happens should really surprise you – only that they actually show it on TV. But truth is stranger than fiction, and this weekend must have been a tough one for the Baltimore police force’s PR department:

Sanders testified that Hunt assaulted him during a drug arrest at Hamilton Park Shopping Center two years ago, and that if Hunt hadn’t reached for his pocket while running away, the five-year veteran wouldn’t have shot him twice in the back.

City police officer convicted on a 2004 charge in beating of teen – Officer faces up to 30 years in prison.

.. Rowland … began to taunt the officer. Mussmacher then took off his badge and service weapon, removed Rowland’s handcuffs and challenged him to a fight. When Rowland refused to fight him, Mussmacher pepper-sprayed him in the face, the records show. At the Northwest District station, Mussmacher hit the restrained teen in his face using his police baton, breaking Rowland’s orbital bone and fracturing his skull in two places, Justice Department officials said. Officer Guy Gerstel, now retired, also hit the teenager in the back with a pool cue from a recreation room. Gerstel pleaded guilty to lying to the FBI and admitted to assaulting Rowland on the first day of the trial.

Those two cases could be straight out of The Wire. I mentioned this one before, and it got crazier this weekend:

Officer charged with murder turns himself in

With dozens of his fellow officers hunting for him and fliers depicting his face plastered all over the neighborhoods he frequented, Tshamba hadn’t been heard from in more than a day since police obtained an arrest warrant with the charges. He had gone “off the grid,” as police put it, not turning on his cell phone or communicating with family or his attorney.

Amid the furor, at 1:30 a.m., Tshamba quietly got himself to Central Booking and sat down in the lobby with his hands folded to wait for his attorney, said Robert Cherry, president of the police union.

A first-degree murder warrant was issued Friday afternoon, charging Tshamba in the killing of Brown, who was shot 12 times, according to charging documents. Police had previously said that Brown was hit nine times.

Actually the officer’s reported accuracy has gone from 6 to 9 to 12 out of 13 shots fired. Commendable, except that he was reportedly shouting, “Do it again!” while his target was backing away with his hands raised. If he had punched the guy, pistol-whipped him, or even shot him in the leg, it probably would have been hushed up. But emptying a .40 caliber gun into an unarmed man, even when that man was grabbing your woman’s butt cheek, is hard to justify – now.

Update: But everyone is entitled to a lawyer to defend the indefensible:

Addressing the incident for the first time, a defense attorney for Officer Gahiji A. Tshamba, 36, described his client as a decorated veteran who has been devastated by the allegations. He said the June 5 killing of Tyrone Brown came after the officer put himself on duty to respond to a sexual assault.

“A police officer in fear for his life has to do what he has to do,” attorney Adam Sean Cohen told reporters outside Central Booking. “If one shot doesn’t work, if two shots don’t work … you fire until the threat is gone.”

Lest we forget, the bad guys have guns, too:

Wesley Brown, 24, was working as a part-time security guard at Applebee’s Neighborhood Grill and Bar on Donnell Drive when he was shot about 12:30 a.m. in the parking lot. Covered in blood, he stumbled into the crowded restaurant and collapsed as patrons called 911. He was pronounced dead at a hospital.

Brown had recently escorted out an unruly diner who refused to pay his bill. He was probably shot by surprise and at least one bullet somehow got past his vest and hit his heart. The diner is now a person of interest.