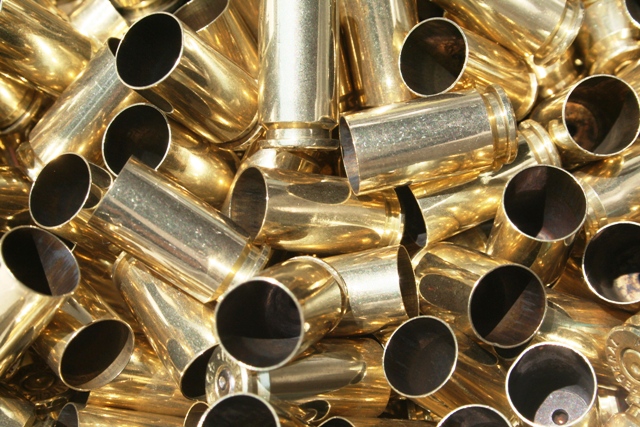 You’d think at a time of 10 percent unemployment, rising taxes, out-of-control government spending, and deficit spending out the wazoo, you’d think that Uncle Sam would jump at the chance to save a buck or two, by selling off some stuff from their vast, overstocked warehouse. And you’d be wrong.

You might not have considered this before, but our military goes through a boatload of ammo on a monthly basis. There’s just no acceptable substitute for practice with live ammo.

One of the advantages of military life is that our country’s finest never have to suffer through using remanufactured ammo. Our governmental bean counters determined that it’s not cost-efficient to use reloads, even for practice on the range. So what to do with all that spent brass?

Well, in the days before Obama, the military sold the spent brass to companies that would recondition and reload them, to resell them to consumers as practice-grade ammo. Good plan, and it netted the government a tidy profit.

Then the Obama administration decided that it didn’t want to do anything that would encourage private citizens to own guns. They instituted a policy change that prevented the military from auctioning off their spent brass cartridges to remanufacturing companies. Pandemonium ensued.

You see, ammunition prices were already skyrocketing, due to an increased demand for raw materials (from China and our own military) and increased demand for ammo (due to fears over Obama’s rep. as anti-gun). Add an abrupt end to the steady supply of cartridges from the military to re manufacturers, and you have a recipe for disaster.

As you might expect, gun owners did not take this news lying down. They complained. A lot. And the policy was reversed. More or less.

You see, the brilliant thing about bureaucracies is that they never quit pursuing a goal. If at first you don’t succeed, try an end-run around the problem by jiggering the rules. WIthout regard to the lowly U.S. Taxpayer. This from AmmoLand.com:

The cure that was arranged by Montana Senators Baucus and Tester to fix the intended military destruction of once-fired cartridge brass last year appears to be suffering from a fatal end-run.

Interested persons will remember that a year ago, helpful intervention by Montana’s senators persuaded the Department of Defense to rescind a fresh DoD directive to military installation commanders requiring them to destroy once-fired brass, prior to selling it at auction into the civilian marketplace for ammunition reloading and other purposes.

An end-run is being done around the rescinding order through quiet and sweetheart side deals with installation commanders that is being aggressively promoted by ATK.

Government Liquidators is another private firm that handles the liquidation of government surplus items, like spent brass casings. In times past, Government Liquidators would take the spent brass, sell it to re manufacturers, keep a small percentage of the profit, and hand the rest of the money over to the U.S. Treasury (i.e.: U.S. Taxpayers). That would be you and me, in case you’re not keeping score.

After the Obama administration first stopped, then restarted the sales in response to the protests, it looked as though things were heading back to normal. But no.

ATK has been encouraging base commanders to sell the brass directly to them, so they can destroy it and then melt it down to recast it as new cartridges for the military – thus saving them the cost of acquiring brass.

ATK makes a tidy profit, and the base commanders are allowed to keep the funds they get from selling the brass in their own discretionary fund. The U.S. Treasury (remember – that’s us taxpayers) get nada. Nothing. Nyet. Bupkis. A big, fat zero.

ATK is using the full force of their marketing clout to sell the program to the various base commanders. Here are some quotes from the ATK brochure:

Currently handling brass scrap for ATK Lake City — for sole purpose of recycling material and preventing any reloading of spent cases by the public with military grade brass.

Keeps Military Grade Brass from being re-loaded by unauthorized users.

To PREVENT anyone from using your scrap ammunition components for non-military purposes. (Emphasis in the original)

Assurability for the [military] installation, that no one can use this cartridge against law enforcement or our military personnel, by reloading the case.

Note the emphasis on the supposition that allowing civilians to purchase remanufactured ammo equates to arming posse commitatus-style militias. Sheesh…

So the bottom line here is that instead of surplus military spent brass going to auction where it would earn top-dollar for the taxpayers, it’s now being sold in a sweetheart deal, where ATK makes money, base commanders get a slush fund, and the taxpayers take it up the tailpipe.

So the next time you wonder why ammo is in short supply, or why practice rounds cost so much, thank your Federal government. Alternatively, email this article to your Senators and Congressmen with a comment. Because despite what they think, Uncle Sam is supposed to work for you.