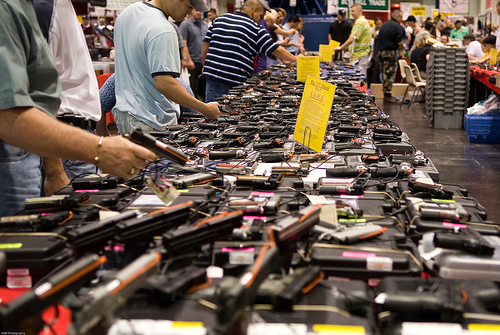 Gun shows are one part trade show, one part swap meet, one part bazaar, and one part Americana. (Seriously; can you imagine a gun show anywhere else on the planet?) Gun shows offer everything from firearms and ammo to knives, jewelry, cookware, clothing, accessories and food. You’ll see booths from sporting goods stores, mom ‘n pop vendors, collectors and nomadic retailers, hopping from one gun show to the next. There are tables, as far as the eye can see, filled with every kind of gun you can imagine, from vintage rifles to derringers to 50 cal. Army surplus semi-auto monsters. So, are gun shows the best place to buy a gun? Uh, no.

Gun shows are a huge business. The ATF reckons America plays host to some 5,000 gun shows a year. Shows like the Fort Worth Gun Show and the huge NRA show in Oklahoma draw thousands of attendees from around the country. Smaller, regional shows are no slouches in the income/attendance departments, either. Whether big or small, gun shows are great for deals—if you know what you’re doing.

If you don’t, well, caveat emptor, pal . . . caveat emptor. If you go to a gun show to buy a gun and you don’t do your homework in advance, you will get what you deserve. I.e., not much.

Much is made of the possibility of guns sold at shows falling into criminal hands—despite the fact that a criminal can buy a gun from a private seller just about anywhere (save a licensed gun dealer). From a consumer’s point-of-view, do you really want to run the risk of buying a “hot” gun? Aside from the moral implications, the police can and will confiscate and destroy a gun used in the commission of a crime.

Sporting goods stores sell used guns, but they are very – VERY – careful to ensure that the firearm comes from a legal source. They file paperwork on each and every firearm; if and when the ATF, FBI, or one of the other alphabet agencies comes a-knockin,’ the gun storel have the bona fides to show where it came from and where it went.

This does NOT mean that every gun (or any gun, for that matter) you find at a gun show is hot, but it can happen. Without proper provenance, you’ll never know.

If price is your deal, gun shows are not necessarily a bargain hunter’s paradise. In Amarillo, Texas, several sporting goods stores sell Springfield XD polymer handguns with an MSRP of $650 for $475, regardless of caliber. A spot check of Amarillo gun shows revealed a range of prices for new and used XDs, from $650 to $495.

You can find a less expensive, pre-owned version of the same XD at gunbroker.com. You have to pay a fee (usually around $20) to a dealer with a FFL (Federal Firearms License) for transfer. The problem here: you have no assurance that the gun is in the condition as advertised. For the uninitiated, it’s the same problem they’ll encounter at gun shows.

Firearms are subject to considerable physical stress. They suffer from wear and tear after even the lightest use. Unless you know exactly what to look for, and where to look for it, a used gun can contain defects, or simply not shoot as cleanly and accurately as it could. Yes, guns can be repaired. But you can’t factor the attendant time and expense in if you don’t know what you’re looking at.

The positive side of gun shows: selection. It’s much bigger than even the biggest sporting goods stores. There’s also the thrill of haggling. If you know how to negotiate, you can trade and/or talk down the vendor to a price that’s at least a bit better than elsewhere. In theory. Ish.

If you’re looking for a firearm that’s outside the ordinary—vintage, collectable, or maybe in an odd caliber or for a special purpose—a gun show is a far better bet than your friendly neighborhood sporting goods emporium. Attend enough shows, and you can develop friendships (alliances?) that keep you informed when a hard-to-find pistol or rifle hits the market.

If you approach gun shows armed with research on prices and quality, you can score some good deals. Most of the time, you’re best advised to settle for window shopping. In that sense, buying a gun at a gun show is a lot like hunting. Sometimes the game “cooperates” and sometimes it has other plans. And so should you.