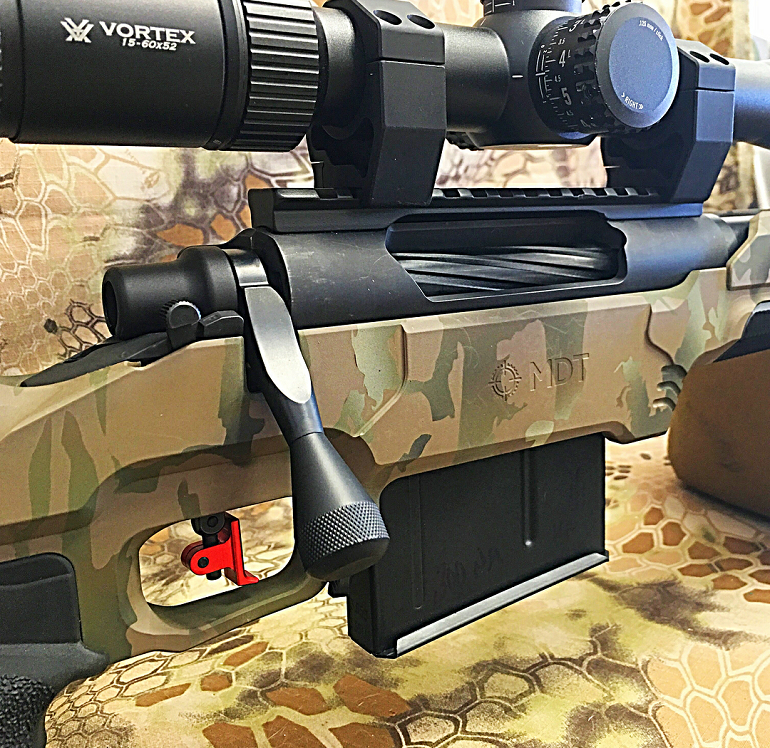 John Stewart of Kiote Corp continues his series on what to look for in a quality custom bolt action rifle. For previous articles click here (trigger), here (barrel crown) and here (chamber and throats). Meanwhile, receivers . . .

A receiver must include several features to provide consistent, measurable and repeatable function over the life of the rifle. Unfortunately, most factory receivers have so many issues that it’s usually better for the customer to simply purchase a quality aftermarket receiver, such as the Kelby Atlas/Atlas Tactical. Here are a few of the basic qualities that must be accounted for — and modified — in a factory receiver to create acceptable, repeatable precision over time. For example . . .

The Remington 700 receiver body is a tapered tube. It starts out around 1.250 — 1.300 inches in diameter and ends up somewhere around 1.125”, though it’s hard to accurately measure because of all the extrusions around the trigger area and tang.

This isn’t necessarily a bad design, but it does create some issues.

Most noticeably, it requires careful, proper bedding for the stock-to-receiver-fit to be precise. There just isn’t any way around that.

Couple that with the questionable quality control that Remington has shown lately and there just isn’t any measurable or quantifiable repeatability from one receiver to the next.

A quality clone receiver must be cylindrical throughout. This, in and of itself, makes for a better and more repeatable fit. Anyone who’s tried to stick an aftermarket bolt into a factory receiver quickly found out that it only goes in about an inch or so. Why? Because the rear of the receiver has an ID of about 0.6990” and the front (near the receiver lugs) measures roughly 0.7002”.

To the untrained person, it’s easily recognizable as “slop” of the bolt. By that I mean, the user can easily wiggle the bolt with very noticeable movement, from side to side as they pull the bolt to the rear.

This is why all factory receivers have to have their raceway bored — typically to 0.7005” — to make them parallel for an aftermarket bolt.

Doing so allows the user to install a one piece bolt, instead of three pieces welded together. The result is not only stronger and typically more precise in function, but also creates a smooth, symmetrical path upon which the bolt can easily and flawless glide.

It’s no secret that factory lugs are not anywhere close to being parallel. In fact, if the user were to apply lay-out fluid to the bolt lugs and to the receiver lugs, apply rearward pressure to simulate an installed barrel, they would find less than 50 percent lock-up between bearing surfaces of the four faces.

This also requires a gunsmith to “blueprint” the lugs which should create, at minimum, 90 percent contact between bearing surfaces. Factory lugs require blueprinting and lapping; you can also see how the lug faces don’t mate up with 100 percent of available surface contact.

This is different than the previously mentioned 90 percent contact. In this case I’m referencing 90 percent of available surface contact.

A quality clone action is made so that 100 percent of available bearing surface for both the receiver lugs and the bolt lugs are equally and completely mated in the closed position. As of the last three to four years, it’s a 50/50 shot on getting square and parallel receiver tenon threads. When this happens, it renders the bore out of line with the receiver. And when you stack that up with the optics, you lose both accuracy and decreased movement in the scope.

A gunsmith must then remove the threads and re-thread the action.

An in-spec receiver should have 1.0625” threads. When it’s rethreaded, they become 1.0725” threads. While not technically impossible, it’s time consuming and costly to both the gunsmith and the consumer. A clone, again, has better quality control, ensuring precise machining.

Factory receiver faces are almost never square. That’s yet another cost a consumer seeking proper accuracy will have to have fixed. It’s rarely a good idea for a custom rifle maker to keep the factory action.

A quality custom bolt action rifle should start out with a high quality aftermarket action, ultimately giving the customer a superior product for less money over time.