I went to college at Penn State, which was, at the time, ranked the #1 party school in America. I didn’t see much of that unless you count LAN parties. For most people on campus their 21st birthday was marked with a pub crawl, vomiting in public, passing out, and cursing the hangover the next day. For me, I spent my 21st mailing off an application for a C&R license and vising the local police station to get a concealed handgun permit. In the years since, I’ve carried a number of firearms, but I can honestly say that I’ve found my perfect carry gun in the GLOCK 43 . . . This is the first handgun I ever bought (and the first gun I ever carried) — a SIG SAUER P226. I still hadn’t quite figured out that whole photography thing, but you get the picture. I carried this gun in a thumb break leather retention holster and while it was ideal in terms of gunfighting potential, it wasn’t so ideal when it came to everyday use. I loved having a ton of 9mm rounds at the ready, but I wasn’t willing to pay the price in terms of the size of the gun. It was a boat anchor and needed to be replaced.

Shortly after graduation I moved down to Fairfax, Virginia and started working as a government contractor. My job kept me in a SCIF all day long so carrying a gun was right out, and for a while I just didn’t have a go-to carry gun. I started writing for TTAG shortly thereafter and Robert surprised me with a small gift: a Wilson Combat Bill Wilson Carry 1911. 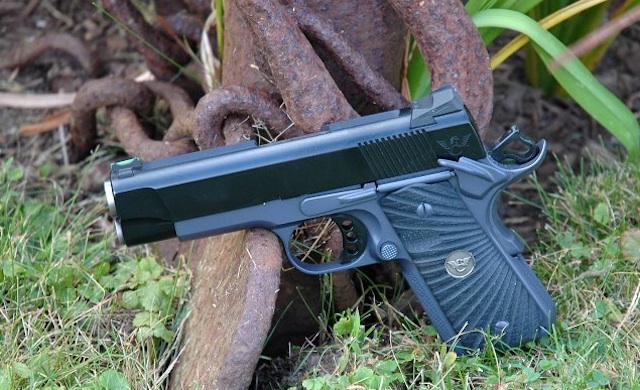 The smaller size of the Bill Wilson Carry was definitely appreciated, as was the better overall quality. Everything about this gun felt right from the trigger to the takedown pin. What was even better was the fact that I could put a one-hole group into a piece of paper no matter what — something that might come in handy if I ever needed to use it to defend my life.

I thought I had found the perfect carry gun, but the more I toted it the more the shine came off the apple. It’s a fantastic piece of art and works amazingly well, but for everyday carry the 1911 can be a bit of a pain in the back.

Even with its form factor the gun is still pretty big and it tends to print in the heat and light attire of the Texas summer. There’s also the fact that, should I ever need to use this gun in an actual self defense scenario, I’ll probably never see it again. I wanted something lighter, cheaper, and more discrete. That’s where the GLOCK 43 comes in. The baseline requirement was that the firearm that replaces my Wilson Combat needed to be at least as accurate as the gun it’s replacing, and the G43 comes close enough for government work. Having jumped that hurdle the rest was pretty easy.

With the form factor of the GLOCK comes a few more options that weren’t on the table before. The Wilson Combat was a holster-only affair, but the G43 can be carried just as easily and securely in an inside-the-waistband holster as it can in a pocket holster. That’s incredibly important for those hot summer days here in The Lone Star State where a holstered handgun would print as much as the New York Times. That’s also a benefit for those times when I need to quickly un-strap and re-strap going into and out of my “gun-free zone” workplace. Shoving something in my pocket is much easier than strapping on a holster.

I had considered the G42 as an option, but I wanted the 9mm as my caliber of choice. That’s where I started this concealed caliber journey and that’s where I prefer to stay. There are some things about the G43 that I don’t like (such as the trigger) but in general the gun meets my every need and does so perfectly. Something that’s just as easy to carry in my hip as in a pocket holster, with seven rounds of 9mm ammunition on tap and no external safety to get in the way when you really need it. I still carry my Wilson Combat from time to time, but for everyday carry the G43 is just about ideal.