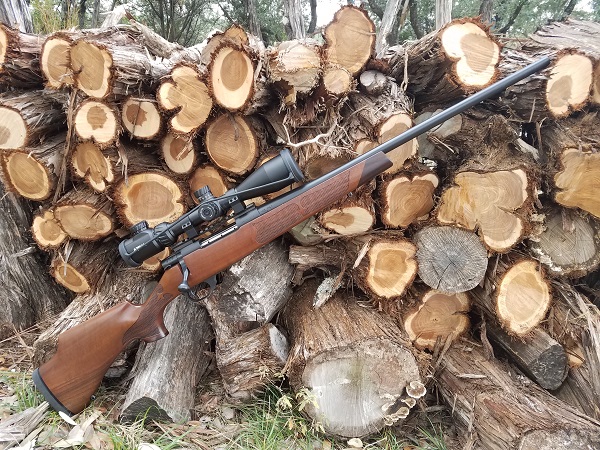 Women are different than men. In our modern culture that statement may seem outlandish. But I have studied the issue thoroughly and extensively and the female body is, in fact, shaped different than the male’s. Which is why most rifles suitable for the male of the species are unsuitable for women. The Weatherby Vanguard Camilla is one the few hunting rifles built to cater to those differences.

As Chris Heuss’ recent TTAG review revealed, the Vanguard is Weatherby’s budget line made by Howa in Japan. OFWG’s who turn up their noses at the “Made in Japan” label note: Howa has been manufacturing great value firearms for years. Rifles that boast a quality few American-made “budget” guns can match. Even a quick glance reveals that the Weatherby Vanguard Camilla is no exception. The Vanguard’s barreled action is basically the same as the Howa 1500, if not exactly the same. Like the rest of the rifles in this line, the Camilla’s 20″ blued barrel is finished smoothly and evenly, free of tool marks or obvious chattering inside or out. The big difference between the Camilla and a “standard” Weatherby vanguard: the stock.

I’ve always been a fan of Weatherby’s squared-off and flat fore-stocks. It may not be as comfortable shooting off hand, but it’s much better shooting off a bag, a bench, the hood of my truck…off of any rest, where most hunting shots actually occur.

The Camilla’s wood is better than other rifles at this price point, especially as many competitors fit cheap plastic stocks. Weatherby fashioned the Camilla’s stock from an A Grade walnut, finishing the end cap and forend in rosewood.

The stock is amply and attractively checkered both fore and aft, with an attractive full pattern on the palm swell. The grip is something smaller statured women shooters will notice right off the bat. It’s thin and narrow, built for smaller hands. The Camilla also boasts a higher Monte Carlo cheek piece for more petit faces. The result: a stock that’s graceful, attractive, practical and . . . short. At least for a 6’1″ guy with a 33″ draw on his old Osage bow. With the Camilla’s stock in the pit of my elbow, the bottom of my hand is about at the trigger. For someone under 5′ 8″ — especially a woman who is, umm, “blessed” — the shorter length of pull makes a big difference, especially in terms of reducing of felt recoil.

Many men don’t know it, because rifles are built for men, but a too-long length of pull forces your body out of position; taking your hips, shoulder, neck and face out of ideal alignment. That leads to the gun spinning you around in recoil, as well as having to shoot off your deltoid or bicep. The Weatherby Vanguard Camilla solves that problem for average shooters of the homogametic persuasion.

The shape of the stock is subtly, but significantly different than most stocks manufactured for hunting rifles today. Specifically, the bottom of the Camilla’s stock — the toe  — angles slightly outward, toward the right shoulder of a right-handed shooter. The angle appears reversed. The negative angle of the stock means that the recoil pad is actually slightly longer at the top than at the bottom. The recoil pad is also fairly thin.

Put that all together and the Camilla’s stock fits much better to a woman’s chest and shoulder than most other stocks.

Some men face this issue as well, and I’m one of them. The toe of many rifle stocks dig into my chest. Although few guns bruise my shoulder, many end up cutting into the top of my pectoral mass.  For women, especially women with large busts, this is a much bigger issue. To be blunt, some rifles force women to shoot the rifle off their breast. And, well, that’s just horrible. Being a tall man, I’m not the ideal candidate to judge the effectiveness of the Camilla’s unique shape.  So what’s a long tall Texan to do? As always, the answer was at the range. Specifically the Range at Austin.

I put on my best smile and walked up and down the firing line asking every woman I could find if they would shoulder the rifle and try it out. Fortunately for you, dear reader, the graciousness of the ladies on the range outweighed the creepiness of my charms. They all agreed.

There was a good cross section of body types there, as well as ages, but almost all of them were beginner shooters. All of them found the rifle easy to shoulder and easy to line up.

One woman had just been shooting her first rifle, an AKM47 with her son. She found the six-and-a-half pound .308 Camilla’s recoil to be less bothersome than her son’s 7.62x39mm.  There wasn’t less recoil. Because her body was properly positioned behind the gun, there was less felt recoil. It was the same experience with every woman on the line, whether they were shaped like Olive Oyl or Betty Boop.

So, the rifle is comfortable for women to shoot, but is it worth shooting?  It is.  As I discovered as I put the Camilla through my normal paces — with one exception.

I usually don’t really clean a rifle prior to shooting it for a review. I often just run a bore snake down it first. This time, the bore was filth. To give the Camilla a fair shake I cleaned the bore completely, then lubed it again prior to starting the shooting. I didn’t clean the trigger, separate the action from the stock, or clean the bolt in any way.

Between myself and the ladies on the range, we put a total of 300 rounds through the Camilla over two weeks. The rifle never presented any issues during loading, firing, or ejecting. The five-round magazine, set inside the hinged floor plate, never bound or failed to load a round — as long as I fully cycled the bolt.

I had to pay attention to do that; when pulling the bolt handle back, there’s a bit of a tightening just prior to the bolt stopping. If I was going slowly, I had a tendency to stop there and not fully cycle the bolt. That would, of course, mean that the next round would not be picked up when I brought the bolt back forward.

I would prefer a smooth pull all the way back. The real fix: get out of the bad habit of cycling the bolt in anything other than a swift, smooth motion. The Camilla’s bolt is also fairly tight to close. Some women had to un-shoulder the rifle, or at least break their cheek-stock-weld, to pull the bolt handle up and start cycling it back.

I shot many different types of bullets and weights through the rifle, from Hornady’s 125 grain Custom Lite SST reduced recoil load (probably the best Texas whitetail round in .308 out there) to Federal’s new 180 grain Non-Typical soft point. I shot both brass and steel-cased ammunition without any reliability issues. That reliability is brought to you by a familiar solid-piece bolt body with a three-position safety and an M16 style extractor. There’s nothing really fancy there, nothing polished, nothing jeweled, no space age finishes. But the Camilla functions smoothly, and the gas ports built into the body eject the gases to the side — and not your face — in the event of a case failure.

Weatherby shooters will be familiar with the Camilla’s two stage trigger. The first stage is completely open. All you are doing is taking up the slack, followed by a fairly creep-free break. This one broke nicely at just over 3 lbs, adjustable down to 2 1/2.  I reckon it would be difficult to notice that half-pound difference.

In terms of accuracy, the Camilla is an adequate performer that has its quirks.

First, the rifle does not like a hot barrel. During my familiarization fire, I noticed that longer strings produced wider groups with any round in any weight. By the time I was getting to round 20 in a long string, group sizes increased by about 20 percent. That’s as compared to shooting five rounds and letting the barrel cool completely.  So when it came to shooting for groups, I would shoot five, stand up, take a drink of water, walk around, let the barrel cool completely, then go back and shoot five more. Weatherby promises sub minute of angle groups with all their Vanguard rifles. Well, they promise sub-MOA three round groups with their ammunition.  I had seven different types of ammunition, none of it Weatherby’s factory ammo. I achieved a few MOA groups like the one above sending the Hornady 168gr A-Max round downrange, but only for three rounds. None of my five round groups quite hit the MOA mark, and none of them broke it. Weatherby did a great job with the Camilla. It would be high on my list for a first rifle for a lady hunter. It’s extremely reliable. Given the right load, it’s accurate enough to take any caliber-suitable game out to 500 yards. Most importantly, it does what it’s supposed to do: it fits a woman’s body. I hope that other manufacturers follow suit and build attractive rifles of this quality, so that we see more female hunters in the field this deer season.

Appearance * * * *
Better than average wood, a great shape and tasteful checkering. A generally high-quality finish and great lines throughout.

Fit * * * * *
Every single woman who shouldered the rifle commented on how good it felt.

Reliability * * * * *
If you arm works the bolt, the guns runs and runs with any ammunition.

Accuracy * * *
1.5 MOA is a good average for a budget bolt gun nowadays, across different bullet weights and types.

Overall * * * * (plus all the stars if you are a woman)
The Camilla is reliable and accurate enough to take game at any reasonable distance. Equally important, Weatherby built for this rifle for the “other” half of the population: women who are steadily accounting for more and more of the hunters in the field. I certainly welcome them. With the Camilla, Weatherby does too.