There’s no doubt that Remington’s 700 is the champ, the long-time gold standard in bolt action rifles. But much as Romeo y Julieta is (arguably) the gold standard of cigars, that doesn’t mean there isn’t plenty of room for improvement. To push that analogy just a little further, you might say that Weatherby’s Mark V Accumark series is the Davidoff of the firearms world. Starting at the business end of the firearm you can see that Weatherby has made some solid investments in the the Mark V’s barrel.

The Accumark’s stainless steel barrel is fluted to reduce weight, increase surface area for better heat transfer and, most importantly, make the rifle look damn slick. The fluting cuts have been blued to provide some contrast to the unfinished remainder and increase the visual appeal.

The 24-inch barrel has been hand lapped to perfection. To protect that investment Weatherby put an aggressive target crown on the end of the barrel. That simultaneously allows the gasses from the barrel to escape evenly (so as not to interfere with the bullet’s trajectory) and protect the muzzle from accidental damage. The muzzle has also been blued, which makes cleaning a little easier. It’s a nice touch. As you’d expect, the barrel is free floating in the hand laminated fiberglass Monte Carlo stock. There’s a pair of sling swivels in the front of the Mark V Accumark’s stock to allow you to quickly attach both a bipod and a sling. The stock sports a webbing pattern in the finish. It not only provides a nice look but makes it easy to grip when wet. 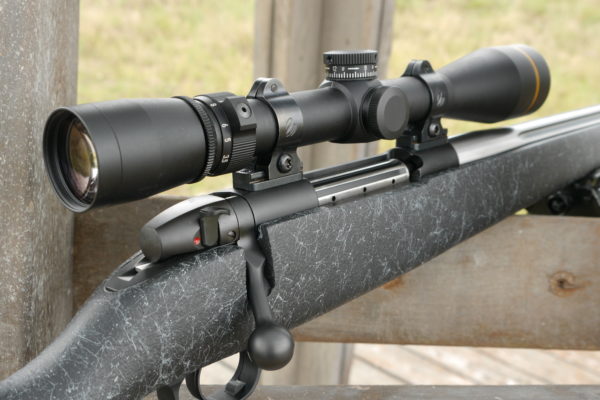 The receiver is blued with a satin smooth finish. The bolt is also fluted, with the cut sections blued to perfection. This reduces friction as it moves, allows the bolt some ability to self-clean and continues the look of the barrel. The bolt sports six locking lugs in two rows which provide plenty of surface area to keep the chamber securely closed.

A safety selector with three options sits the back of the bolt. Working the action, everything feels solid and smooth. The action features a short 54 degree throw for quicker follow up shots. There’s a small cutout in the front of the action to allow the rounds to be loaded into the internal magazine — the ejection port is too small otherwise. That’s a good thing, since a shorter action means more strength and better accuracy.

The receiver comes drilled and tapped for scope rings from the factory, and just about every reputable scope ring manufacturer makes a compatible set. Underneath is Weatherby’s new and improved LXX trigger. It’s a solid, single stage trigger with a clean break that’s user adjustable down to 2.5 pounds.

I’m not a fan of anything cut into my trigger blade, decorative or not. While the Weatherby logo looks good, I prefer a smooth, uninterrupted shoe. When I’m spending this much on a gun I don’t want the most important piece to be compromised in the name of branding. Out on the range the Mark V Accumark’s stock feels great. Drop at comb is just right, providing a solid cheek weld even with a tall scope attached. The factory length of pull is a little short for my taste, but it can be adjusted with spacers. Recoil is stiff, but manageable. The smallest group of the day was shot with the cheapest box: the Hornady hunting loads. The Mark V Accumark seems to like lighter and faster rounds. That’s a good thing as most hunting rounds fall into in that category.

The rifle is advertised as a sub-MoA shooter. Copt that. No matter what ammunition I tried I fed it, I got sub-MoA three-round groups.

When the barrel started to heat up, groups tended to string a little bit north and south, opening up to a full 1 MoA. The first three rounds, however, consistently measured 1/2 MoA. The first two rounds usually stacked on top of each other. And then I damn near sneezed and threw the third round right. How does the Weatherby Mark V Accumark stack up against its competition?

At $2,300 MSRP the gun is definitely on the expensive side of the equation. Remington’s comparable model, the 700 CDL SF is only $1,180 MSRP — damn near half price. But Big Green’s fit and finish isn’t quite as good as Weatherby’s, and the stock isn’t as nice. Savage has their Model 12 BVSS at $1,146, but Weatherby sports a better trigger and Savage’s wood stock can’t match the Weatherby.

So the Mark V Accumark is definitely a better rifle, with impressive looks and performance. But is it $1,000 better? You’d have to spend an additional grand on the comparable guns to get them to the same apples-to-apples level as the Mark V Accumark. So if what you want is an out-of-the-box top notch hunting rifle, I’m going to say yes.

Style and appearance * * * * *
I really dig the two tone look. Fit and finish is satin smooth and perfect.

Ergonomics * * * *
Just great. Not as adjustable as other stocks, but there’s a reason why the Monte Carlo design has been much loved for years.

Customization * *
Not much you can do here, but there’s not much you’d want to do, either. You can swap out the stock and change the scope. But in general the gun doesn’t need much changing.

Reliability * * * * *
This gun ran everything without any issues. Then again, I wouldn’t expect anything less from a bolt gun.

Overall * * * *
The gun misses the fifth star only because of its price tag, but it more than earns every one of the other four.