RF’s tragic on-again, off-again love affair with the Caracal is the stuff of legend. Against all odds, after Caracal recalled and destroyed every pistol they sold in the U.S., the new, redesigned Caracal is now back on the market and ready for purchase. This time, the striker-fired object of RF’s EDC desire is drop safe.

For this go round, RF handed the once-loved, thrice-scorned EDC to me (break my heart once, shame on you; break it twice . . .). While I won’t redo all of the basics of the pre-recall version (read our review here), there are some features worthy of note on the new Enhanced F Limited Edition. 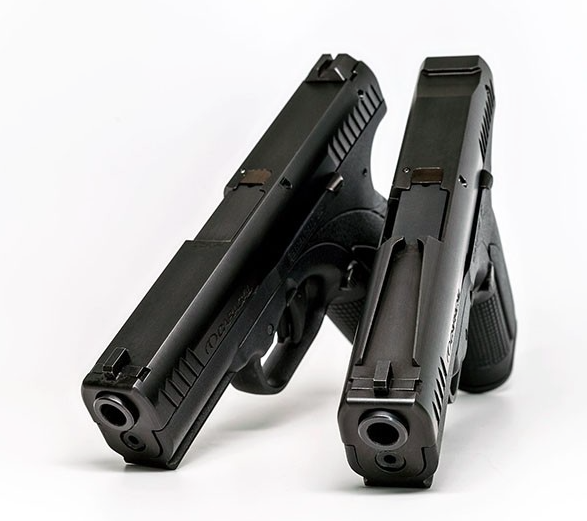 In this case, limited means limited. Caracal’s only made 150 of these pistols. Of the current run — all of which have been delivered to dealers — 60 percent have Caracal’s Quick Sight System. The remainder are equipped with a standard three-dot set up. The Caracal F’s finish reflects current polymer striker-fired standards. There’s nothing shiny and nothing polished, but nothing faded or uneven, either. There are no visible tool marks or rough edges anywhere on the gun. The Caracal F is a duty-sized gun. Its barrel length is a centimeter or so longer than the GLOCK 19 (lying on top of the Caracal F above). Its other major dimensions are somewhere in between the G19 and G17 — except for weight. The Caracal F is just a bit heavier than either, but shares the dreaded [for some] GLOCK grip angle.

The most striking feature of the Caracal pistol: its extremely low bore axis. Lower than any other pistol of a similar frame size. All other things being equal, a low bore axis should provide less felt recoil and muzzle rise over a handgun with a higher bore axis. [Click here for Nick’s explanation of the physics involved.]

The best example I’ve found is a standard revolver in a magnum caliber vs. a similarly framed Chiappa Rhino revolver. You can certainly feel the difference there. But some firearms with a high bore axis, like many of SIG SAUER’s pistols, can also be some of the fastest for recovering a sight picture after recoil. Given the decent weight on the F’s slide and its low bore axis, I expected relatively little muzzle rise. And that’s exactly what I got. The gun creates more of a backward push into my palm, and less muzzle rise than you average semi-automatic handgun.

That said, I found myself fighting the gun, trying to find a good sight picture after each round fired. I could pour rounds out of the gun with some speed. If wanted to hit what I was aiming at past seven yards I had to slow it right back down. 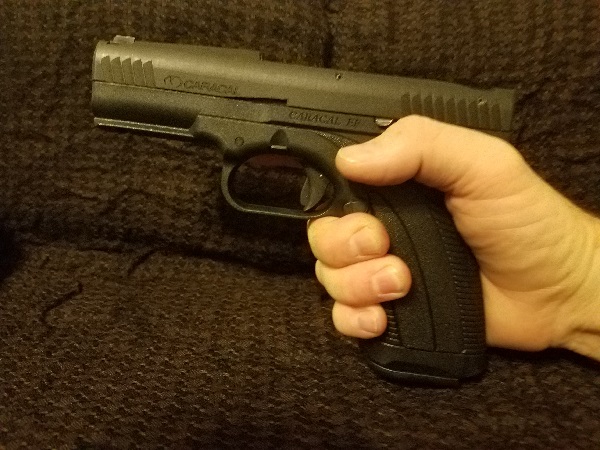 The Caracal Enhanced F certainly feels different than other similarly sized pistols, both in terms of where it sits in your hand and the big honking handle. I like it. Single-handed, my fingers get a great wrap around the firearm. Oddly enough, my left hand struggled to find purchase on the pistol; it continually ended-up creeping down the handle.

The F’s swooping design allows for a few different grip styles. I found that my typical two thumbs high grip wasn’t the best for this firearm. Fortunately, the handle’s long arc provided plenty of real estate to alter my grip. When I tried the F with a high-handed grip, I had to fight the gun to keep it on target. Shooting the F with my right hand only, the high grip worked well to reduce recoil.

But I was still moving the muzzle too much. This was even more pronounced when I shot the gun with my strong hand only. It’s a bit too easy to move the F’s muzzle around. And with the short sight radius created by the Quick Sights, it’s hard to tell when you’re off.

The F’s ambidextrous magazine release has a solid texture change and stands out from the frame in the appropriate manner. The release is perfectly placed for instinctual and efficient operation. The slide release took a bit of training. It’s in a great spot for me; not so much for shooters with smaller hands. It’s almost too stiff to hit with just my firing hand thumb, although that may smooth out over time.

Although the trigger guard is excellent for bare-hand shooting, it’s a bit too narrow to shoot with work gloves. So equipped, I could get my index finger in without moving the trigger, But it was difficult to get it back out again. The tip of the glove of either my work gloves and winter hunting gloves kept getting stuck in the trigger guard. There’s no sight behind the ejection port. Instead there’s a simple and much appreciated cut-out that lets you hook the slide on gear or clothing to rack the pistol with one hand. The front sight is in its normal location at the muzzle end of the slide. Behind that: two outward angling walls that end in the opening of the rear sight, just in front of the chamber on the slide. This leaves the gun with a very short 2 1/4” sight radius. The stated goal: to put both sights on the same focal plane, simplifying the alignment between your sights and your target, presumably making your first round out faster.

As far as finding the sights between the target quickly, the system works as advertised. But for me, the Quick Sights offer no speed or accuracy advantage over traditional 3-dot systems, “lollypop” sights, or Heine Straight 8s.

I put an 8” target at 15 yards and tested my first round draw-to-fire time. I did this with the Caracal Enhanced F, a GLOCK 19 with stock sights, and an STI DVC Carry with Heine Straight 8s.

The fastest was definitely the DVC, but that’s my daily carry. So I compared the Enhanced F’s draw-to-fire time against a stock G19. After 20 rounds of each pistol, the average times for both were within .15 seconds of each other, with the slight advantage going to the Caracal. 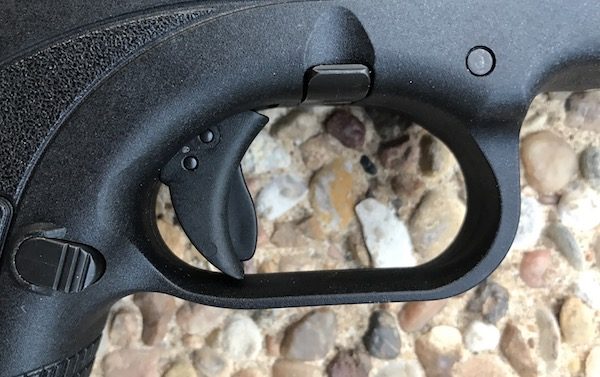 I’d assign that advantage to the F’s better trigger. That said, I’ve been shooting for some time, and I practice regularly. I’ve learned to pick up the front sight with just about any pistol, even with GLOCK’s U-shaped “sights”. Caracal’s Quick Site system may make a difference for someone who hadn’t trained much, or a new shooter.

[NOTE: TTAG will be comparing draw-to-fire time of the F and GLOCK 19 with a new shooter and will post the results here.]

The Caracal Enhance F’s trigger feels like an good aftermarket GLOCK trigger. No more and no less. The pull is at 4.8 lbs, with very little grit, and a smooth pull all the way through a shallow ark.

It doesn’t feel like the trigger’s stacking, but there’s a small wall to break through at the end of the pull. I felt quite a bit of grit in the trigger moving forwards, resetting; more than on the pull itself.

With such a short sight radius, accuracy at distance was a challenge. The Caracal literature claims that this sight set up is “more than capable of accurate fire out to 50 meters.” I guess that depends on your target size. 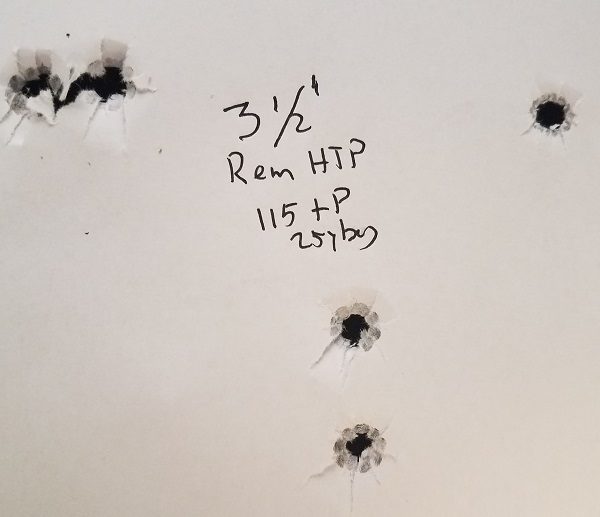 It took me a while to get the hang of the sights. My first series of bench shot groups averaged 6” at 25 yards. The next day, I took a little more time setting up the gun and settling down behind the sites.

Taking my time, the Caracal Enhanced F shot and average of 3 ½” with five-round groups for 20 round of Cap Arms 115gr FMJs and Remington 115gr +P Hollow Points, at 25 yards.

Every round I shot, save the TNQ 100gr frangible round, shot between those two and 4”. The TNQ shot just over 4”. That makes a center mass 50 yard shot possible, but smaller targets unlikely.

You can buy the same gun in a two dot traditional sight radius set up. There are no night sights available, but Caracal says they’re considering this for the future.

The Caracal Enhanced F displays exceptional reliability. For the full 560 rounds I put through the gun, I had no issues whatsoever with firing.

I shot both FMJs as well as HP rounds from five different manufacturers, in 115gr, 124gr, and 147gr. I shot both standard and +P loadings. As always, I lubed the gun with Rogue American Apparel’s Gun Oil prior to firing, and never cleaned or disassembled the gun until the firing portion of the review was finished.

When it came to firing, ejecting, and loading another round to fire again, the gun ran flawlessly. There was, however, an interesting issue with loading the magazine . . .

To be clear, whether the action remains open or closed has nothing to do with how hard the magazine is inserted. It’s the angle at which it’s inserted. I seriously doubt that was an intentional design. And while it’s not a huge deal, it could be. A gun with an inconsistent manual of arms can be an issue in stressful situations. RF loved the Caracal for its low bore axis and an unrivaled trigger. I didn’t get any appreciable benefit from the slimmer profile and TTAG’s jefe reports that the trigger is no longer a standout. He says the back-from-the-dead, now drop-safe Caracal F’s gone from a great gun to a good one.

I will certainly agree with the latter assessment. And that’s about it.

Style and Appearance * * * *
Sleek. I like the midline position of the handle, as well as the overall look of the Quick Sight system.

Customization *
With this set up, the sights you get are the sights you keep. And there aren’t very many aftermarket options for parts, yet. I suppose you could paint it.

Accuracy * * *
With careful set-up, the Enhanced F delivers 3 1/2 to 4-inch groups. From a duty gun, that’s acceptable accuracy. I have no doubt the two-dot model with a full-length site radius would do better.

Reliability * * * *
Firing and ejecting any number of rounds from different manufacturers and of different types, the F ran without a hitch. But mind the angle of the magazine as it enters the mag well — it has a direct effect on whether the slide stays back upon insertion or moves forward to chamber a round. The chamber closing inconsistency is a matter of concern.

Overall * * *
I give credit to Caracal for having the cojones to make an innovative firearm. While the new version is a solid performer — comfortable and reliable — the Caracal’s low bore axis didn’t equate to superior performance. For me, the Quick Sight system had no real benefit.