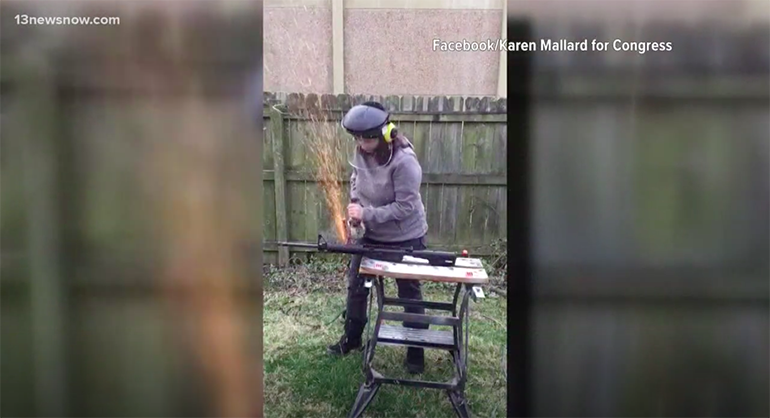 Elected officials really only know two things: the date of their next election and the phone numbers of their largest contributors. Beyond that, it’s all film-flam, anodyne camera-ready soundbites and kissing babies. If you think they’re actually conversant — let alone informed — on the topics they’re expected to discuss and vote on, I have a bunch of lightly used Broward County Sheriff’s Department sidearms (never fired, plenty of holster wear) I’d like to sell you.

That conspicuous lack of expertise is how you get bills that would outlaw those shoulder things that go up and ban dangerous heat-seeking bullets (but whatever you do, don’t try to point out their ignorance). It’s also how you get video evidence of anti-gun candidates for office violating federal gun laws.

The Federal Bureau of Alcohol, Tobacco, Firearms and Explosives (ATF) is investigating congressional candidate Karen Mallard after she posted a video on Facebook that shows her cutting apart an AR-15 rifle.

Mallard (“I grew up around guns!”) is a school teacher who’s one of six Democrats vying for the nomination to challenge Virginia’s Rep. Scott Taylor. And if you think the educator and aspiring legislator would be willing to protect the lives the children she’s entrusted with, think again. That isn’t in her job description.

“Our job is to teach children, it’s not to protect them from gun violence. That is the government’s job. And they’re failing at it.”

So, being a Democrat running for office during the current post-Parkland atmosphere of anti-gun hysteria, and admittedly inspired by the hoplophobic harridans at Moms Demand Action, Mallard figured that a little moral preening for the camera would be just what the pollsters ordered. So she got a hold of her husband’s AR, a saw, and went to work on the rifle via Facebook live.

Many of those comments were negative. Some people accused Mallard of political grandstanding.

Several others said Mallard broke federal law by taking a legal firearm and altering it, making it into an illegal one. Many of them referred to details contained within the Sawed-Off Shotgun and Sawed-Off Rifle Act which, in part, prohibits people (except for those permitted by the act) from having a rifle that has been “modified to an overall length of less than 26 inches.”

Oopsie! Ms. Mallard didn’t take all that criticism well, quacking back at her detractors…

And yes for all the NRA trolls out there, I finished the job according to regulation and turned it over to the police. Why are you more outraged about me taking a gun out of circulation than about our children being murdered in our schools?

What regulation would that be, Ms. Mallard? *crickets*

Sure, the schadenfreude runs heavy here. But If you’re comforted at all by the news that the the ATF is “investigating” Mallard, don’t be. If you haven’t learned by now that there are no consequences for politicians and media types who are on the “correct” side of certain issues — law-breaking or not — then you haven’t been paying attention.

David Gregory wasn’t charged after waiving a 30-round magazine around on the set of Meet the Press despite the “high capacity” magazine being outlawed in D.C. at the time. And presidential candidates who compromise national security never find themselves in the dock, either.

The good news is that despite Virginia having moved from solidly red to purple, Virginia’s 2nd congressional district remains decidedly, deeply crimson. Incumbent Republican Scott Taylor defeated his Democrat opponent in 2016 with 61% of the vote. So even if Ms. Mallard manages to defeat her five rivals for the nomination, she isn’t likely to be introducing any legislation in the House intended to do something about the 93 million Americans we lose every day to gun violence.