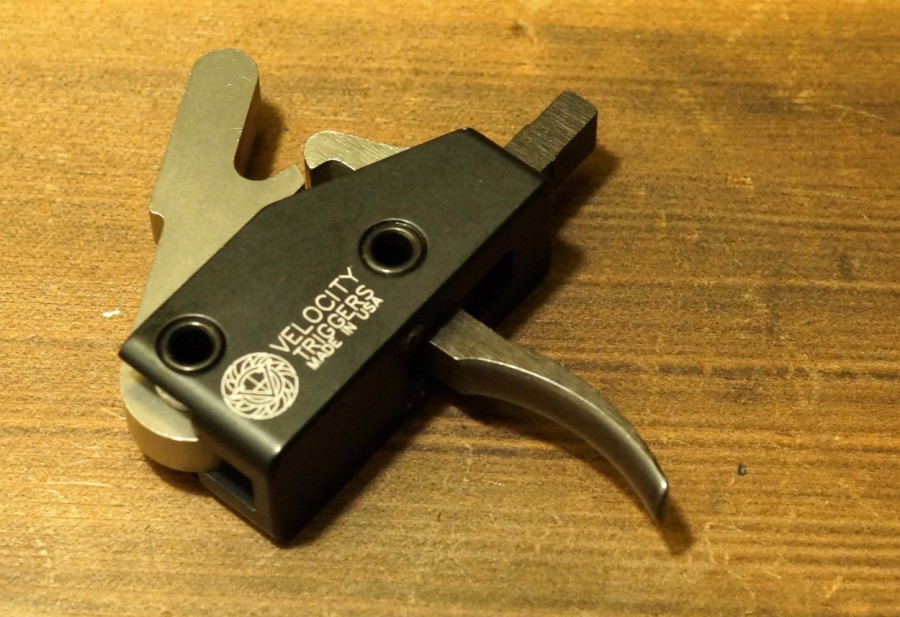 Tom Vehr designed and made triggers at Timney and Knight Rifles for a combined 27 years before striking out on his own and starting the parent company to Velocity Triggers. Basically, he knows triggers and how to manufacture them. Experience combined with wire EDM-cut tool steel and Robar’s NP3 treatment make for a pretty nice, drop-in unit. The MSRP is the real kicker, though, as . . .

a new Velocity Trigger carries an MSRP of only $150, and I’ve seen them at online retailers for quite a bit under that. In the drop-in AR-15 trigger world, this represents quite the bargain. Actually, in the 9 or more triggers I’m going to be testing as part of this drop-in AR trigger “roundup,” I believe it’s the least expensive by a $40 margin when comparing MSRPs.

Despite this low cost, Velocity Triggers is not sacrificing quality. The build of this unit breaks down as follows:

Also included is what I think is an important feature that’s on most, but not all, of these triggers — set screws to tension the unit inside of the receiver, pushing it upwards against the trigger pins and locking it (and the pins) solidly in place. Trigger pull weight is set at the factory, but you have the option of selecting between 3, 4, and 4.5 lbs at the time of purchase. My 3-lb unit measured exactly, dead-on 3 lbs every time I measured, both when new and after I put a bunch of rounds through it. You may notice (see two photos up) that there is a set screw for adjusting trigger pull weight but, much like Timney and many of the others, the end user is not supposed to touch it and it’s typically installed with thread locker. My understanding is that this allows the factory to adjust each one so it’s perfect, but then lock it down to squash the chances of that set screw backing out during use.

The geometry of the lock work is standard AR trigger format, the hammer spring feels like it’s a full-power spring or close to it, and the disconnector is a full 1/4″ width. In addition to the curved trigger seen on this unit, Velocity Triggers also offers a straight blade. Although I appreciate the clean simplicity of it, in Velocity’s case I actually like the looks of the curved one better. To maintain continuity across all of these drop-in trigger reviews, including the Elftmann Tactical review already published, we’ll rate them on the same metrics. For definitions of the following trigger fundamentals, please see that Elftmann review.

I shot a handful of IMI 5.56 and a bunch of Silver Bear .223 with the Velocity Trigger installed, and it had no issues with either. Despite their fairly hard primers, they were dented with authority. The trigger was totally reliable throughout, both suppressed and unsuppressed as seen in the video. The trigger blade feels good and looks good. It’s a great, single-stage trigger for precision shooting and it’s an extremely fast trigger for 3-gun style competition use or just for fun on the range.

Velocity Triggers claims a trigger pull quality that rivals a nice bolt action rifle, and in that they have succeeded. This is an excellent trigger. At the price, it’s an absolutely amazing trigger. It isn’t a coincidence that the first two to be reviewed were the most expensive and least expensive ones in this roundup. It’s my opinion that the ELF trigger is, speaking strictly on trigger pull fundamentals, better. But they’re both so good that it’s entirely possible only a trigger snob would really care about — or maybe even be able to feel — the difference, as we’re talking about perfect vs. exemplary; A+ vs. strong A. When it’s a choice between two excellent options, $150 MSRP vs. $259 MSRP will certainly be a deciding factor.

Also, shout-out and thanks to Strike Industries for sending me a trigger jig to make this back-to-back testing so much easier. Fundamentals * * * *
Without the back-to-back experience of the other triggers, I’d rate this five stars. But this ~9-trigger roundup will have one on top and one at bottom, and the Velocity is amazing but second fiddle to the ELF on fundamentals thanks to just a skosh of creep and a tad more overall travel.

Overall * * * * 1/2
As much we try to avoid half-star ratings, I just can’t do it here. It isn’t a tie with the ELF in my mind, but it’s closer than a star down. If price meant more and minuscule creep less, that would change and it’d be a five-star tie. For this roundup, we’re weighing fundamentals first, then features, function, and build quality right up there with it, and the importance of price (and looks) is subjective so that one’s in your court.