After the Sandy Hook Elementary School spree killing, Cheaper Than Dirt! stopped selling firearms. When The People of the Gun slammed the seller for their selling-out to the anti-gun zeitgeist, CTD backtracked. They claimed they’d resume firearms sales after they “updated their process” [as above]. I never like the word “process.” And now I like it even less. Click here for the webpage telling dealers that “Cheaper Than Dirt! doesn’t sell guns.” Click here for the LWRC AR-15 M6A2, displaying the same advisory. Click here the LWRCI M6A2, which also tells buyers to FOAD. Back atcha big guy. So who’s cheaper than that . . .

VA Senator Vogel. She emailed the VCDL to reassure the gun rights group that she’s pro-gun . . . but she has to “remain open minded about how we change the tone and address some of these [gun control] issues.” The VCDL Prez responded. “While having an open mind is not necessarily a bad idea generally, it is important to note that too open of a mind will let a person’s brains spill onto the floor.”

I can’t wait to get me my M4. And I am NOT going to jam my finger into the action like that. No sir.

Shooting twenty children is a crime against humanity. So is the situation in Mexico, where a disarmed population remains at the mercy of heavily armed drug thugs and even more heavily armed government stooges.

During the six-year Calderon administration, and as a result of his war against drug trafficking, 25,276 persons acquired the classification of “desaparecidos” (disappeared). They are 25,276 human beings who officially are neither alive nor dead. They simply are not there. They are only statistics, but behind each of them there is a woman, a man, or a child with names, last names and families, and of whom so far nothing is known. This weekly journal gained access to the “Integrated Database of Persons not Found” (Base Integrada de Personas no Localizadas) and  the report from all the attorneys general in the country, which was presented last July 17 (2012). From an analysis of both documents comes the first official count of the “disappeared” in Mexico, a phenomenon that is part of the inheritance that, like it or not, the government of Enrique Pena Nieto received and must confront. [via borderlandbeat.com]

$75,000 Worth of Guns Stolen During Big Gun Armory Burglary A reader reckons this heist smells fishy. I guess it’s hard not to agree. 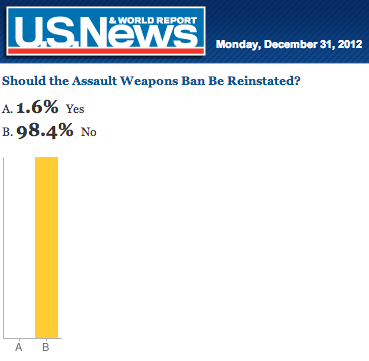 Doc Thompson wonders if the GOP has already sold gun rights advocates down the river. Ralph called this one: a high-cap mag ban is the “compromise position.”

“He said a man then walked out of the body shop, and the suspect shot him.” Proof that you can do everything right—or nothing very much—and still get shot and die. [officer.com]

Daughter of top doctor goes into labor after  she and her Occupy Wall Street organizer boyfriend are arrested when police ‘find explosives and weapons’ in their apartment Once again, armed progressive nutjobs fly under the U.S. media’s radar; imagine if they’d been NRA supporters. dailymail.co.uk