I was introduced to Joe Marler (Law Enforcement Sales Manager at Daniel Defense), the host for my visit to the Daniel Defense manufacturing facility, when we both participated in the Government Training Institute Legion‘s Precision Rifle With Elevated Shooting Course.

During the course, Joe and I were paired as we shot from an elevated railing. I could hear him muttering about how my .300 Winchester Magnum was vibrating him off his rest. I told him that he too should be shooting a real man’s caliber.

Despite that, Joe seemed pleased to act as my guide for a tour of the Daniel Defense facility near Savannah, Georgia.

As I made the 3 1/2 hour drive from my home to the Black Creek, Georgia facility, I thought back to the only other visit I had made to a firearm manufacturing site, L’atelier Verney-Carron in France (see the TTAG review).

My assumption was that the Daniel Defense and Verney-Carron gun manufacturing would prove to be polar opposites. The former likely consisting of a completely mechanized, sterile, assembly line system, while the V-C workshop I’d toured consisted of painstaking handwork by craftsmen.

I was correct about the type of fabrication being starkly different, but I was wrong in thinking that there wasn’t intense, personal attention to detail by the Daniel Defense gunmakers. I was also wrong to think that the passion for their firearms they turn out might be any less among the Daniel Defense management and staff.

Cleanliness is Next to Safety

As we made our way onto the factory floor, I was struck by how immaculately clean everything was. I don’t mean that the machines and spaces didn’t look well-used, I mean I didn’t see a single out-of-place tool or piece of trash.

I mentioned it to Joe and he stated, “A clean workplace is a safe workplace.” Joe has a large reservoir of [dry] humor (if you doubt me, listen to the end of the interview), but in this case he wasn’t trying to be funny. He was deadly serious that the first consideration is safety for their employees.

He also pointed out that it takes extreme cleanliness to keep the manufacturing of the various parts for their firearms at a high-quality. So, the 300,000 square foot facility is pristine.

Before we walked through the manufacturing area I asked Joe how often they released new products. His answer was that they attempt to have a new firearm ready for each SHOT Show. I also asked about their business model and he answered that, unlike many firearms manufacturers, Daniel Defense builds against orders. I suggested it meant that Daniel Defense doesn’t build ‘spec houses’, but rather they build houses for individual clients. Joe agreed that that was a fair analogy.

Our first stop on the floor was to the portion of the factory where barrels are fashioned. All of the barrels are cold hammer forged. Prior to forging, the barrel blanks (made from materials such as 4150 CMV steel) are drilled to an initial bore diameter and an outer profile is obtained with a lathe. For the cold hammer forging, a mandrel (third from the left in the above photograph) is inserted into the bore. The mandrel allows the formation of the desired chamber as well as the lands and grooves of the rifling.

During the forging, four separate hammers from four opposite angles strike the rough-formed barrel blank, creating 50 tons of force.

The forging of a barrel takes an average of 4800 impacts, over approximately four minutes, to force the shape of the material around the mandrel. Once forging is complete, the profiles of the blanks are further refined, barrel extensions are added, engraving is carried out and the interior and exterior finishes are applied.

Our next stop was the area set aside for the manufacturing of the upper and lower receivers for Daniel Defense rifles and pistols. All of these parts are machined using horizontal milling centers. The raw material for each upper and lower is 7075-T6 forged aluminum. Following machining, the receivers (as with all machined parts) are exposed to ‘vibratory deburring’.

We then moved from the machining of the upper and lower receivers to the CNC machine center.

This is where the lower receivers are machine engraved with the maker’s name and address, as well as the model, serial number and caliber of the firearm. 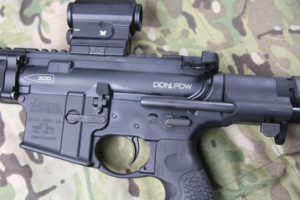 The Daniel Defense rails are manufactured in-house from aircraft grade 6061-T6 aluminum. The extruded product is supplied by outside contractors and comes into the factory in long sections. It’s cut to size and then vertically milled in CNC machines. There are 20+ variations of rails manufactured by Daniel Defense. One of these, the Rail Interface System II – or RIS II – has been used in the field by US Special OPS since the mid-2000s.

Our next stop was where thin-film ceramic coating occurs. Daniel Defense is unique in being the only weapons manufacturer that uses a Cerakote robot for the application of the thin ceramic layer. The Cerakote process at Daniel Defense involves 1) deburring and cleaning the parts, 2) loading the parts onto a fixture, 3) masking portions not to be covered in the ceramic, 4) coating using the robot, 5) removing the masking and 6) curing for one hour in an oven set at about 300 degrees Fahrenheit. The finished products are inspected, and then either used for DD firearms or packaged for shipment to other end-users.

Before heading to the armory, we made a brief visit to the area where they do laser engraving. Unfortunately, none of my photographs of this area worked out. However, the following photograph of the laser-engraved index marks on the handguard of a DD5 rifle illustrates the characteristic white-lettering produced by this process.

Our penultimate stop along the tour was at the armory where the various parts of the Daniel Defense weapons are gathered and used to construct their rifles and pistols.

Three assembly lines are pictured below. 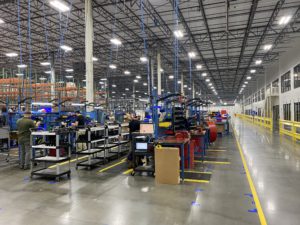 The far right bench area (with no workers present) is used to assemble their bolt action, Delta 5 rifles.

On the opposite side of the Delta 5 area is the assembly point for the new DDM4 PDWs. Across the aisle from the DDM4 area is the line where the AR-Platform DD5 rifles are assembled. Though Joe asked that I not reveal the number of firearms manufactured and assembled on the Daniel Defense property, let’s just say it is not just a few. Given the number of hands that each firearm (and its parts) pass through, I was amazed by the quantity of production.

Our tour of the facility ended, most appropriately, where the newly-assembled firearms are test fired through several magazines of the appropriate caliber. Once the testing is completed the firearms are inspected one last time. Obviously, if any mechanical defects are detected, either during the live fire exercise or the inspection, that weapon is disassembled, and subjected to additional scrutiny.

I came away from the Daniel Defense manufacturing facility with a new appreciation for the breadth and depth of the love for firearms in our country. I had an epiphany while taking the tour.

Whether a gunmaker produces custom, semi-custom or off-the-rack products, most of them care deeply about their products and customers. Not just because the end user provides the bottom-line for any company, but because making firearms is almost always more of a passion rather than a profession. Not to mention that many of these products are used as defensive tools.

The workers with whom I interacted on the Daniel Defense factory floor and in their offices really want to produce a product that each customer will appreciate and be proud of.

I hope this isn’t my final visit to a firearm manufacturing facility. Such visits are incredibly inspiring to someone passionate about shooting and hunting.